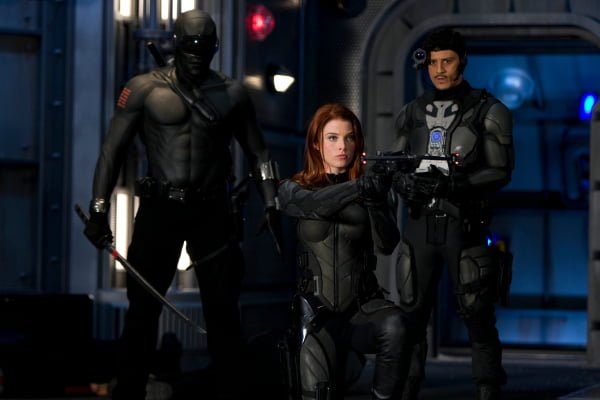 A scene from G.I. Joe: The Rise of Cobra

G.I. Joe: The Rise Of Cobra
Following the release of the Transformers sequel, G.I. Joe: The Rise Of Cobra is based on another of Hasbro’s popular toy lines, which in turn was also one of the more well-known cartoons of the 80s. Set ten years from now, G.I. Joe is all about a secret, elite military force with two new recruits; Duke, played by Channing Tatum, and Ripcord, played by Marlon Wayans.

Following these recruits, the movie shows us what it means to be, well, “Real American Heroes.” The real story, however, introduces us to their fight against criminals like Destro, the arms dealer, and the rising threat posed by an organization known as Cobra and their plot to control the flow of weapons, including a new nanobot technology that could destroy an entire city.

As you may have guessed, the film is meant to be pure action fluff at its greatest, and that’s perhaps made all the more obvious by the fact that G.I. Joe: The Rise Of Cobra was directed by Stephen Sommers, the man behind The Mummy and The Mummy Returns.

While I love a good blockbuster, and all the action and explosions that come with them, this is still a genre with more than its fair share of silliness. Summers himself has directed a number of patently silly films, and G.I. Joe: The Rise Of Cobra is just the latest one on his resume.

Failing only briefly in delivering believable effects, the film is much better than I expected, however, and in fact, better than the Transformers sequel for the most part. Summers and his team keep the cheese at relatively acceptable levels, and the film feels surprisingly light and fun. It’s what you would call a jokey, “high octane” action-adventure, with some very good special effects overall.

I would recommend the film to anyone who doesn’t mind movie fluff, but I have to add that the film is a little more violent than expected, which is actually something I enjoyed considering how many action films feel sanitized for young audiences. Parents may just want to remember that the film is rated 14A and can be fairly violent.

Denzel Washington plays Walter, an everyman working as a dispatcher for the New York subway system who must deal with a group of train hijackers, led by John Travolta as the twisted Ryder.

Written by Brian Helgeland, who also wrote Man on Fire for Scott, the story is taut and the dialogue is surprisingly good. The problem is really that the third act falls apart after an incredibly promising opening and middle. The film is hardly believable, although it is as close as Hollywood gets, but final act is almost laughable in comparison. The only great moment is in the film’s utterly simple but praiseworthy final scene.

Editor Chris Lebenzon also needed to be reigned in as his work here is way over the top, making the film feel spastic at times. Some of those choices work to build up the intensity of the story, but more often than not I just found his editing distracting, playing out far too much like a very bad music video.

Food, Inc.
For North Americans, food seems to be an abundantly available commodity that you almost don’t need to think about. We live in a time where supermarkets and stores are offering more than they ever could before, and there rarely seems to be shortages.

While people have started to think about eating locally, and where their food comes from, there still seem to be a lot of questions worth asking and Food, Inc. is looking at a lot of things that should still concern people when they go shopping. Things that we really don’t know enough about, in fact.

This documentary might scare some people, looking at things that we sometimes like to ignore, but it’s an incredibly important film, and it could change your opinion of big box grocery stores, and food processing.

As the filmmakers point out, you also have more choice than ever before, and by shopping differently you’ll send a clear message to the companies that sell us the food we live on.

Directed by one of my personal favorite filmmakers, the great Chris Columbus, who brought us Home Alone, not to mention Mrs. Doubtfire, two Harry Potter films, and the film adaptation of Rent, I expected something at least acceptably funny, which is sadly not the case. I Love You, Beth Cooper is simply a bad comedy, with a weak cast, which was misdirected, and badly wanted to be as funny or touching as Superbad, but just ends up missing the super and being painfully bad.