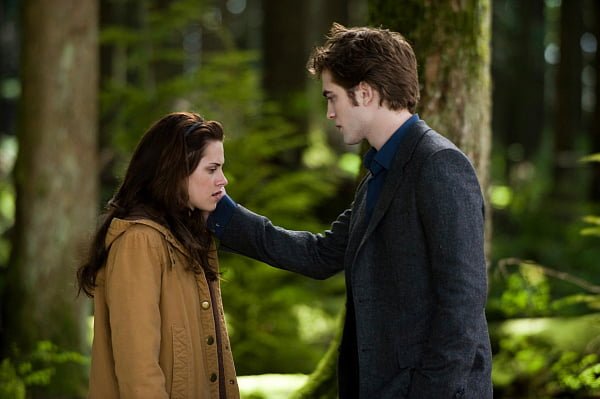 Theatres are packed with new films this week, including the much drooled about vampire teen drama, The Twilight Saga: New Moon; Sandra Bullock‘s family film, The Blind Side; the festival favorite, and already critically acclaimed, Precious; plus the Werner Herzog film, Bad Lieutenant: Port of Call New Orleans, and the animated comedy, Planet 51.

Jumping into the second chapter of the series we catch up with Bella Swan, played once more by Kristen Stewart, as she tries to drag herself through her now desperately sad life after Edward the vampire, played by the dreamy Robert Pattinson, picked up and left town to protect her from more blood-sucking drama. More drama awaits her though since Bella doesn’t immediately realize that the local Quileute tribe of hot young men, including Jacob (Taylor Lautner), are hiding a dark side: they can turn into oversized wolves at the drop of a hat.

In other words, enter the theatre at your own risk, or at least, enter with the understanding that this is most definitely a series made for moon-eyed teens hoping to see Pattison without his shirt on.

On a much more serious level, The Blind Side is a new drama by writer and director John Lee Hancock about a homeless young man taken into a well-to-do home, and given the chance to start his life over.

Quinton Aaron stars in this real-life story as Michael Oher, the soft-spoken young black man who ends up playing football at the local high school and earning himself a place among his new family, the community, and eventually, as a professional football player. Tim McGraw and Sandra Bullock co-star as Michael’s adoptive family, who take him in and try to make him feel at home among all the adversities of highschool life.

The film is, quite obviously, ripe with potential, but comes across as a weak attempt at sentimentality according to the common consensus.

“If Frank Capra was still around, director John Lee Hancock might have had to fight him for the job,” Betsy Sharkey wrote for the Los Angeles Times.

While Mick LaSalle of the San Francisco Chronicle wrote, “If someone were telling you this story, you might say, ‘Wow. That’s something.’ Even so, the narrative is not quite big enough to bear the weight and significance that writer-director John Lee Hancock tries to attach to it.”

As the Oscar buzz builds coming off the film’s critically acclaimed appearances at the Sundance, Cannes, and Toronto film festivals, it seems almost long overdue that Precious should make its way to theatres.

Already a shoe-in for some sort of recognition at next year’s Academy Awards, the film is still no doubt going to have a hard time bringing in large audiences. Theatre goers will likely have a hard time with the fact that this is a realistic movie with some big emotions, but it’s also one of the best films of the season.

Directed by Lee Daniels and based on the novel Push by novelist Sapphire, the film is set in Harlem in 1987. Following Claireece “Precious’ Jones, played by Gabourey Sidibe, the story reveals to us the terrible life of this young, sixteen-year-old girl, taking care of her mother, played by Mo’Nique, even as she’s pregnant with her father’s child. Seemingly abused at every turn in life, Precious is further challenged at school since she also can’t read or write.

As Ann Hornaday wrote in the Washington Post, “[Precious] surely qualifies as the most painful, poetic and improbably beautiful film of the year.”

Werner Herzog is a serious filmmaker with vision, proving equally in his documentaries and dramas that he knows how to set the stage for grand stories. In his latest film he gives Nicolas Cage the opportunity to play a dirty, drug-crazed police detective with the added benefit of letting him chew the scenery in a way that can only be described as epic.

Cage is Terence McDonagh, a New Orleans detective working on a complicated murder case while he happily ignores the law to get whatever he wants, including answers and drugs. Dealing with a complicated relationship with a prostitute, played by Eva Mendes, Terence hunts the ruins of New Orleans even as he plays with his addictions.

Screened earlier this year at the Toronto International Film Festival, Port of Call New Orleans is getting stellar reviews from critics. “It’s a rare and precious thing when a filmmaker gets funding for a script that features a coked-out, OxyContined-out, sleep-deprived Cage with a .44 Magnum in his waistband, spewing lines like “Shoot him again … his soul is still dancing,” wrote Peter Hartlaub for the San Francisco Chronicle.

Much like the tepid vampires, it doesn’t look like a very good week for aliens either, despite the fact that Planet 51 comes with a stellar cast of actors in the animated story of one lonely astronaut stranded on a distant planet.

Surrounded by aliens, who of course see that he’s an alien, the animated film loots numerous classic sci-fi films for gags and constant jokes that, according to most of the biggest critics, come off as half-witted attempts at humour.

“A high concept gets low execution in Planet 51,” Todd McCarthy wrote for Variety, “a lame-brained toon that even kids will recognize as an insipid goof on sci-fi conventions.”