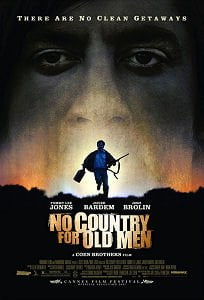 We laughed, we cried, we bit our nails, and in the end, 2007 was a pretty good year at the movies. Of course we saw our fair share of the usual blockbuster Hollywood explosions, but this week I’m changing gears a bit to look back at the absolute best films of 2007.

A number of films grabbed the attention of critics last year, but few topped as many lists as Joel and Ethan Coen‘s No Country for Old Men. Adapted from author Cormac McCarthy‘s book, the film is a thriller that puts its cast (which includes Tommy Lee Jones, Josh Brolin, and Javier Bardem) to good use with stunning cinematography from Roger Deakins. Expect to hear a lot more from this film as we get closer to this year’s awards season.

Claiming equal glory on the critical stage is director Paul Thomas Anderson‘s There Will Be Blood, which stars Daniel Day-Lewis as a would-be oil tycoon bent on making money at any cost. Set in a small, dusty town, nothing – not family or faith – seems to matter once the oil starts to flow. While the film itself is praise-worthy, I think the focus for the film will remain on Daniel Day-Lewis’ performance.

One of my own personal favorites last year was Michael Clayton, starring George Clooney as the title legal “fixer”, who finds himself involved in a case that challenges his conscience. Michael Clayton also features noteworthy performances by Tilda Swinton and especially Tom Wilkinson, but it’s ultimately a movie that’s made by Clooney’s insightful performance.

There isn’t nearly enough room for me to go into all the details about the year’s best dramas, but I wouldn’t be doing 2007 justice without mentioning films like Away from Her by director Sarah Polley, David Cronenberg‘s Eastern Promises, Sean Penn‘s Into the Wild, and the Bob Dylan fictional biopic I’m Not There. All great dramas well worth checking out.

While most years I wouldn’t think to mention comedies or dramadies, 2007 was a fantastic year for movies that made us laugh. I don’t think anyone would be surprised to hear that Pixar’s latest animated film, the foodie’s fantasy Ratatouille, is yet another stellar film. The story revolves around a rat who wants to be a chef, but the heart of the story is about individuality, and aspiring to your own greatness. Directed by Pixar’s amazing Brad Bird, the film is a real treat.

Canadian music fans may feel a little confused about the next film, but I’m not talking about the music awards. Directed by Jason Reitman, Juno is a dramedy about a teenager (Ellen Page) who ends up pregnant with her best friend’s baby. The film deals with Juno’s decision to have the baby, but give it up to a couple who can’t have their own children. This is just one of many films that ended up being labelled “unconventional”, but the truth is that Juno is a clever drama with a liberal dose of comedy and heart.

Another film that defies explanation, but earned itself a spot on my all-time favorites list, is Craig Gillespie‘s Lars and the Real Girl. The film stars Canada’s amazing Ryan Gosling as Lars, a delusional young man who falls in love with a sex doll. While the premise sounds juvenille, and silly, the film has a real heart of gold and handles the idea with immeasurable skill. Gosling certainly makes the film tick, but there isn’t a bad performance in the entire story.

Lastly, I have to give praise to Disney for a surprise grand slam in the form of Enchanted, a fish-out-of-water fairytale about an animated princes who finds herself wandering in our very own, real-life New York City. With Amy Adams as the lovely Princess Giselle, the film is a sweet treat, that is at its best when the film makes fun of Disney’s best years.

Looking at the entire year, there are certainly lots of other great films. These just stand out as some of the films that made the best impressions, and impressed me the most. It’s also worth noting the amount of Canadian talent involved in these films, including Gosling, Page, Polley, Cronenberg, and Reitman.