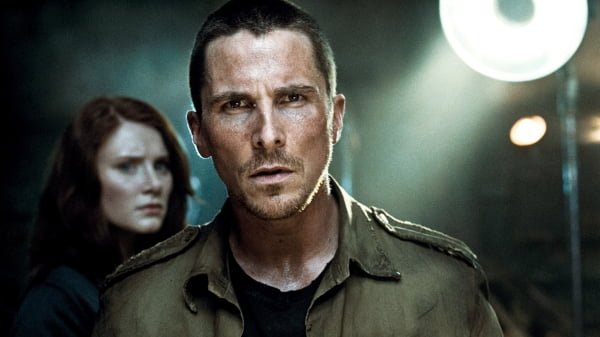 Blow all the ad dollars you want, sell the story as much as you like, and show fans those cool special effects; I still guarantee that the most talked-about aspect of Terminator Salvation will always be Christian Bale’s tirade against cinematographer Shane Hurlbut.

It’s nothing against the film, but it’s hard to imagine any bits of celluloid that could be as revealing, or intriguing as Bale’s gigantic rant.

Set in a post-apocalyptic world overrun by those fearsome, intelligent machines, one man is seen as humanity’s hope against the robotic forces that could wipe them out entirely. As the remnants of civilization hunt for a way to save themselves, they must also deal with a new threat perpetrated by the machines: cyborgs – robots with an exterior of skin, made to look like humans, but following the orders of the machines.

With a veritable army of screenwriters involved in the project at one time or another, Terminator Salvation is a surprisingly coherent action film that drags itself through the mud, just to revel in the grit for a while. This is, after all, a film about what could be the end of humanity, and the action lends itself to that mood, it’s just hard not to feel a little worn out at the end of the film.

Bale is certainly competent once again as a grimly determined man, but his entire role feels like something we’ve seen before in a far better movie. On the other hand, co-star Sam Worthington as Marcus Wright puts on a blockbuster performance, making what could have been a clichéd character the real weight behind the entire story.

In what I can only call the most unnecessary sequel of the year, Ben Stiller is back to star in Night at the Museum 2, AKA Battle of the Smithsonian.

Taking the action on a much bigger scale than before, Battle of the Smithsonian overdoes it all just a notch. The frenetic energy will likely appeal to kids though, it just feels like random, thoughtless action from an adult frame of mind. Likewise, while the first film had a lot of heart, I think the sequel lost some of that charming energy, meandering among the silly characters just a little more than was necessary.

Thankfully, Amy Adams as Amelia Earhart is a wonderful treat as Stiller’s right hand lady, offsetting some of the more zany characters, and giving the film a bit of focus. She is actually one of the big reasons I’m recommending Night at the Museum 2. The film may wander, but it’s still fun, and if you enjoyed the first film, there’s no reason you won’t enjoy this one too.

In the latest collection from the Mystery Science Theater 3000 gang, Joel, Mike and their machine pals Tom Servo and Crow T. Robot are at it again, this time in a holiday-tastic edition that sees them cracking wise on such classics as The Corpse Vanishes, Warrior Of The Lost World, Santa Claus, and Night Of The Blood Beast.

Included in the four-disc set are also a number of funny extras, like a “Turkey Day” edition of Night Of The Blood Beast, an interview with Warrior Of The Lost World director David Worth, and a Tom Servo figurine.

Thanks to the folks at Shout! Factory, this new collection is a lot of fun, especially for the diehard geek fans out there who have been following MST3k since day one.

Crossing a documentary with some far out storytelling, Paper Heart is the tale of Charlyne Yi, a girl who says she doesn’t believe in love and decides to cross America looking for some kind of understanding. Enter actor Michael Cera into the plot, Seemingly Yi’s perfect man, but the question looms as to whether she can solve her riddle, and keep the boy.

Paper Heart was certainly one of the indie hits of the year, earning a lot of credibility with everyone who has grown tired of the usual Hollywood fluff, although it’s worth mentioning that it did not wow critics while it was in theatres. Metacritic.com has the film at just 54% with the Onion’s A.V. Club quoting, “This isn’t a movie. It’s a MySpace page.”