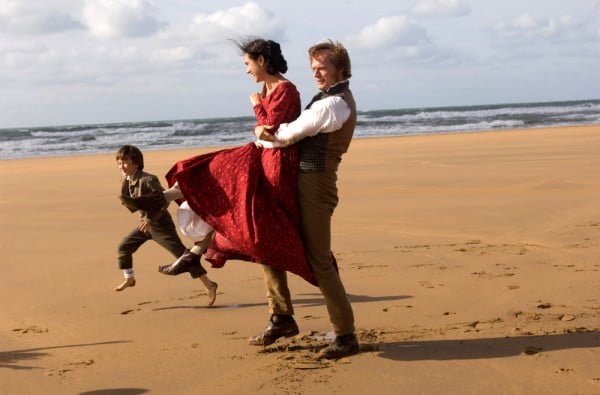 Creation fumbles around at times, and misses big opportunities, but it’s by no means a terrible film. It’s just messy. While it might be worth a watch, it’s not what I consider a big-screen event.

Also in theatres this week…

Fraser plays John Crowley, an average working-class man who is starting to make a name for himself in the corporate world when his daughters fall gravely ill. With his wife, played by Russell, the family seeks for help and answers, but discover that there simply is no cure.

However, there is hope in the form of a scientist, Dr. Robert Stonehill, played by Harrison Ford. Robert is an untried and unconventional researcher who may have the hope that John’s family needs, but to get anywhere they will need a lot of money, and time – two things which are in short supply.

At press time there were very few published reviews, but the early consensus is that the film is a safe retread of numerous films we’ve seen before. Bill Goodykoontz of the Arizona Republic summed up the film by saying, “The road to mediocrity is paved with good intentions.”

In what I can only call one of the most inept looking action movies of the year, Paul Bettany and Dennis Quaid star in the end-of-the-world story that pits humanity against a legion of apocalyptic angels.

With Bettany playing the Archangel Michael, the story centres on a small group of people fighting to stay alive. The story apparently revolves around the fact that God has lost faith in mankind, and his angels have been sent in to clean up the world with fire, brimstone, and mayhem.

Reviews have not been available as it looks like the studio is not screening the film for press. Based on the horrible trailer alone, and the ridiculous special effects in that trailer, it’s safe to say you can skip this one unless you’re really desperate for a laugh.

And speaking of desperate laughs, The Tooth Fairy stars Dwayne Johnson as, yes, the Tooth Fairy in a film by director Michael Lembeck, who previously directed The Santa Clause 2.

Early reviews out of Australia suggest this film is short on anything that might be construed as entertaining. Apparently Johnson is happy to stick his name on any dumb film that comes along.

Ben McEachen of Australia’s Sunday Mail compared the film to “oral surgery without laughing gas,” which he simply stated “is an annoying pain we could all do without.”