DVD Tuesday: ‘There Will Be Blood’, ‘Walk Hard’ 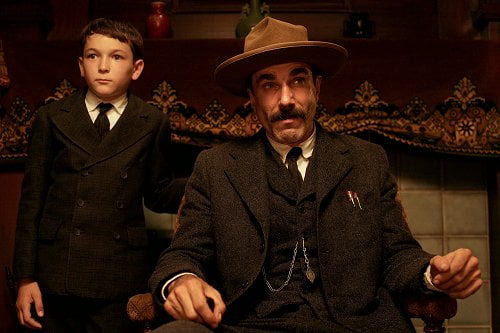 There Will Be Blood

The oil trade gets a touch of evil this week as Daniel Day-Lewis‘ Oscar-winning role, from the film There Will Be Blood, arrives on DVD. Other notable new releases include the spoofy, music biopic, Walk Hard: The Dewey Cox Story, with an all too perfect John C. Reilly as Dewey; Leonardo DiCaprio‘s Earthy documentary, The 11th Hour; and the story of one mysterious critter’s birth into fame in The Water Horse.

There Will Be Blood
Daniel Day-Lewis earned his first Oscar with his star-making role in My Left Foot, but it seems almost inevitable that he will be forever known from this point as the evil, and menacing, Daniel Plainview in There Will Be Blood.

Set in the early 1900s, when the hunt for oil was driving people to Texas and California, the film is a character study of one man’s quest for wealth at any cost. Daniel Plainview’s unstoppable drive to find oil takes him to the small town of New Boston, California where he works to buy up all the surrounding land, and then find a way to get that oil out at the cheapest price. This means that he not only has to deal with the townspeople, but their evangelical preacher, Eli (played with strange vigour by Paul Dano).

It is this epic meeting of oil and church that drives the core of director Paul Thomas Anderson‘s ruthless, and visually stunning film. And while the artful cinematography translates the entire mood of the film, which makes There Will Be Blood a very well-wrought film indeed, the problem is that the story is nothing more than a flowing series of events for Daniel Day-Lewis to emote through. Day-Lewis brings a potent, visceral rage to this character that legitimizes the entire film, but that hardly makes the story any better.

Sitting through two-and-a-half hours of slow-moving storyline is a big roadblock to enjoying this character, and I’m not sure it’s entirely worth it for every movie fan. Daniel Day-Lewis is amazing, but by the last 45 minutes you will really have to be committed to this film, and the ending is anything but spellbinding.

Walk Hard: The Dewey Cox Story
Take a step back from the dozens of music-legend biopics you have seen and rejoice in this silly, slapstick adventure about the hard-fought life of Dewey Cox.

Transcending the fame of any one decade, Dewey Cox (played by John C. Reilly) barrels through the years with reckless abandon, releasing pop hits and embracing clichés as he fights to make up for the unfortunate death of his brother, who was killed during a machete fight when they were boys. After that, Dewey is constantly reminded by his father that “The wrong kid died,” even as he meets the Beatles, plays with Elvis, and raises his monkey.

With wall-to-wall gags and jokes filling the entire movie, the film is hilarious, although it’s worth noting how many respectable actors and musicians play farcical roles in this film. John C. Reilly alone is an incredible actor, and as Dewey Cox he manages a wacky performance that is almost surprising in its originality, especially when you consider this is basically just a spoof film.

The co-stars and cameos are also top-notch, with Jenna Fischer and Tim Meadows giving the most memorable performances as his second wife and band-member. But it is the weird and wonderful cameos that really won me over, with intentional casting of people who look nothing like the stars they are playing. Jack White of the White Stripes is laugh-out-loud funny as Elvis Presley, and appearances by Jack Black as Paul McCartney and Paul Rudd as John Lennon lend a lot to the film’s weird style.

As a spoof of the music biopic, it doesn’t get much better than this, and the two-disc DVD comes with a number of great extras. The best of the lot being the extended cut of the film on disc one, along with a commentary by director Jake Kasdan, with producer Judd Apatow, and John C. Reilly. Disc two does have some worthy extras though, including entire music performances, a quick look at how they cast one very naked guy, and assorted extras about the making of the film.

The 11th Hour is a documentary by Leonardo DiCaprio that is worth watching even if you have already seen Al Gore’s An Inconvenient Truth. Leaping into the same cautionary tale of protecting the planet, the film attempts to give viewers an idea of the kind of “footprint” mankind is leaving on the planet, and how it is affecting our future. With comments from leading scientists, environmentalists, and other professionals, the film drives home a strong message of using consumer choice to make a difference.

The Water Horse: Legend of the Deep stars Alex Etel, as a young boy who finds an egg that hatches into what else, but the famous creature that lives within Loch Ness. Things get troublesome though when the boy’s “water horse,” as they call it, starts getting too big to hide and the nearby military could pose a problem.

New television arriving on DVD this week include the first raucous season of Hell’s Kitchen, Rock of Love season one, and the third collection of every geek’s favorite show, Mythbusters.