Film Friday: ‘Sex And The City 2’ and ‘Prince Of Persia: Sands Of Time’ 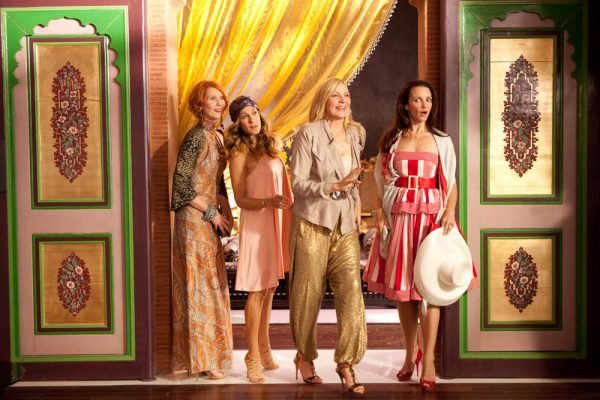 New this weekend in a theatre near you: the girls are back to their usual antics in Sex and the City 2; and Jake Gyllenhaal goes on an action-filled adventure in Prince Of Persia: Sands Of Time.

Give the girls a hand. They’re back, and they’re headed to Abu Dhabi in what might be one of the most unnecessary movies of the year. That probably won’t stop any of the ladies out there who are big Sex and the City fans, but I can at least warn you, can’t I?

Writer, director and producer Michael Patrick King takes on the top three roles once again in the latest story of Carrie, Charlotte, Miranda, and Samantha as they embark on fresh exploits in the Big Apple, and abroad.

This time, Carrie, played by Sarah Jessica Parker, is having issues with her new life with Mr, Big, played by Chris Noth, and their decision that they don’t want to have children. At the same time, Carrie is worried that their relationship, now that they’re married, is starting to get a little dull and routine.

Samantha, played by Kim Cattrall, has also been invited to visit a super swanky hotel in Abu Dhabi, where the owner is putting the girls up for free for a week. As they leave though, Charlotte, played by Kristin Davis, is afraid her husband is going to have an affair with their very hot, braless nanny. Miranda, played by Cynthia Nixon, is also enjoying her newfound freedom now that she moved on from her demanding and bad-tempered boss.

Of course, what happens when you send Samantha to a country with strict laws and beliefs about sexuality? Or when Carrie, who is feeling out of sorts with her relationship, runs into her old flame, Aidan, played by John Corbett. A little trouble certainly won’t be far behind.

Spending a reported $10 million on the wardrobe budget alone, Sex And The City 2 has the fashion sense fans will expect, and for the most part the girls are back in key form. The problem is that at least some of that budget probably should have gone to a better scriptwriter and director.

King drags the story out, despite the fact that’s it’s a pretty basic storyline, and at 2 hours and 25 minutes it’s a tiring movie.

I also found myself checking my watch, and the first comic scene that drew a few laughs was 20 minutes in, and it didn’t even involve one of the main characters. The scene was also clearly dropped in for the men in the audience, and involves a hot nanny, played by Alice Eve, who runs around without a bra on, and while it was certainly funny, it’s kind of a pointless aside.

I can also appreciate Sex And The City 2 as simply the equivalent of a popcorn movie for women who can relate to these four New York archetypes. Action movies spend their budgets on explosions; Sex and the City spends its budget on clothes. Simply different movies for different people.

Sex and the City 2 is still a bad movie though. Without my spectacles, this is a poorly written film, hobbling along on a few characters, with no direction. It’s also filled with appalling rich white girl fashion, a very bitchy lead character, and some truly offensive moments that treat Middle Eastern ethics as a punching bag simply because it’s somewhat amusing for the stupid American plot.

The only great thing about the film is the last ten minutes, which wraps up with one of the few moments that actually feels like it belongs, and also reminds me of some of the few episodes I watched from the original series.

Had King put a little more effort into the story, it might have been a lot of fun as a date movie, but it’s really a weak effort that will only appeal to die hard fans who weren’t somehow turned off by the awfulness that was the first Sex and the City movie.

Jerry Bruckheimer must be looking for another franchise, because everything about Prince Of Persia: Sands Of Time feels like it’s setting up a realm that we’ll be visiting again soon.

Starring Jake Gyllenhaal as the adopted prince Dastan; a clever, and reckless fighter who always seems to be looking for adventure, the story is set a long time ago in the land that was once known as Persia.

Dastan and his two princely brothers, Garsiv and Tus, played by Toby Kebbell and Richard Coyle, are on an errand set by their father to take care of a troublesome nearby city. On the way to their destination, however, the group of princes and their army uncovers news that the holy city of Alamut has been forging weapons for their enemies.

This news begins a seige of the city that ends with Dastan capturing a strange, glass-hilted dagger that he soon discovers has a very big secret; it can turn back the last few seconds of time.

All is not well after the battle though, and Dastan ends up caught in a conspiracy that threatens to destroy the world as he runs for his run with Alamut’s princess Tamina, played by Gemma Arterton.

Populated by cartoonish villains, including the good Sir himself, Ben Kingsley, Prince Of Persia is not exactly a terrible action-adventure, but it’s also several notches below the excitement I hoped director Mike Newell and Bruckheimer could bring to the story.

The best praise I can muster for the film is directed at Gyllenhaal and Arterton, who are fantastic together, as well as Alfred Molina who provides some necessary comic relief. Newell and his team also managed to capture the Prince of Persia stunts acceptably, rendering them as close as possible to what fans of the game series will expect.

Prince of Persia otherwise wanders a tepid threshold of special effects and storytelling. Nothing leaps out as particularly groundbreaking, but it’s good enough to entertain most action fans for two hours.

Starring Adrien Brody and Sarah Polley, the film has been receiving big praise from critics, including Lisa Schwarzbaum of Entertainment Weekly.

Director Jean-Pierre Jeunet, known for his hit film, Amélie, brings his particular brand of whimsy back to the screen with this story of Bazil, a down-and-out orphan who seemingly has no future. Trying to make a life for himself after a random drive-by-shooting leaves a bullet in his brain, Bazil turns a salvage yard into an artist’s haven while he also plots to bring down the company responsible for his father’s death.

Micmacs is receiving great reviews for its colourful, clever style, and critics are overwhelmingly giving it high scores.

“Micmacs may not be everyone’s cup of capricious comedy, but it delivers an audio-visual picnic of surprises that makes craziness contagious,” wrote Rex Reed for the New York Observer.