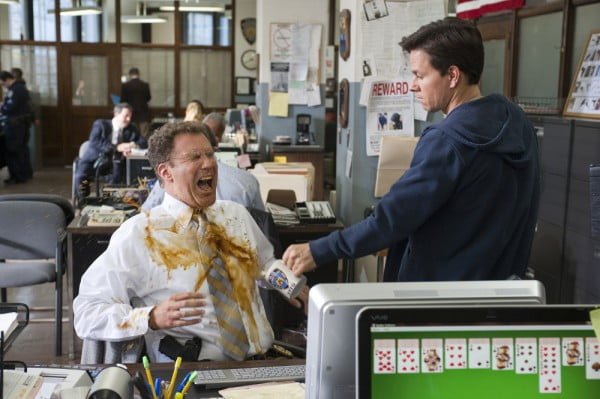 Will Ferrell and Mark Wahlberg in The Other Guys

Adam McKay might be the best thing to ever happen to Will Ferrell. Take a look at most of Ferrell’s movies, and you’re going to get this feeling in the pit of your stomach that you’ve seen it all before. Ferrell is a funny guy, but he seems to fall into the trap of playing the same shtick over and over again.

Writer and director Adam McKay knows what he’s doing though, and once again, as we saw in Anchorman, Talladega Nights, and Step Brothers, he tames Ferrell just enough to get something funny and a little new out of him.

The Other Guys stars Ferrell and Mark Wahlberg as reluctant partners in the New York City Police Department. Wahlberg is Detective Terry Hoitz, an overzealous cop who was given a desk job after he shot baseball player Derek Jeter in the leg. Ferrell plays the mismatched Allen Gamble, a quiet, naive outsider on the force who started out as a police accountant, but now finds himself forced to work with Hoitz.

Inspired by the explosive antics of detectives P.K. Highsmith and Christopher Danson, played by Samuel L. Jackson and Dwayne Johnson, Hoitz constantly wants to leap at the next big case, but somehow that never works out very well, especially with Gamble behind the wheel of his Prius.

They get what could be their big shot though when Gamble drags his partner out on what Hoitz considers a minor case; a businessman has purchased a number of properties for construction, but he hasn’t done his paperwork. The partners end up on the edge of a very big case that has them kidnapped, hiding from armed thugs, and chasing a money trail across the city, all while their boss, played by Michael Keaton, tries to get them off the case that they’re constantly messing up in some way.

The Other Guys is a simple premise that does almost everything right. Ferrell and Wahlberg could have been awful in these roles, but McKay guides them to performances that are laugh-out-loud hilarious. Between the sight gags, the zingers and dialogue, and the supporting cast of cops and robbers, McKay has made one of the few funny police action-comedies I’ve seen in a long time.

The film also pulls off a number of impressive action sequences which are farcically hilarious, most notably the opening scene where Highsmith and Danson chase armed thieves across the city, ultimately in a double-decker bus that has their car jammed through it.

Later in the film, The Other Guys does lose some of its momentum, and it’s sometimes a little too silly. Ferrell and Wahlberg also lose some of their appeal in the latter parts of the film when their shtick has worn a little thin, but the film’s big finale does ultimately pay off quite well.

Walking into the film I didn’t expect it, but The Other Guys is one of the funniest films I’ve seen all year. It could also be the start of a funny franchise for Ferrell and Wahlberg, although it might take a lot of ingenuity to make this concept fresh a second time.

Best of all, I have to praise McKay for the barbs at America’s financial troubles on Wall Street, which is summed up perfectly in the film’s closing credits. If you want to know the full depth to which the business world has sunk, stay for the closing factoids that run at the end of the film.

Also opening this weekend in theatres…

The dancers are back again, and this time they’re in 3D as the Step Up franchise returns for one more dance-off.

In the latest, Rick Malambri, Adam Sevani, and Sharni Vinson star as three talented, young dancers who have to prove themselves against some of the world’s best hip hop dancers.

The film really requires little other explanation. If you enjoyed the previous two films, you’ll probably enjoy this one, but the critics have been less than enthusiastic.

“It’s like Muppets Take Manhattan,” wrote Ed Gonzalez for Slant Magazine, “but replace a milquetoast young artiste for an amnesiac frog and a group of muppets for a post-racial group of seamlessly integrated metrosexuals.”

In this folk tale turned real-life story, Robert Duvall and Bill Murray star in the story of a 1930s-era hermit who threw his own funeral while he was still alive.

Duvall plays Felix Bush, the questionable hermit who is rumored to be a killer in league with the devil. Seeing an opportunity to make some money, the local funeral parlor owner, played by Murray, invites the town to come out and tell Felix the stories they’ve heard about him, one of which involves a widow, played by Sissy Spacek.

With a number of positive reviews behind it, Get Low is definitely a film worth checking out this weekend, but it’s only playing in select theatres.

As Joe Leydon wrote for Variety, “With a mix of sly humor, homespun grace and affecting poignancy, Get Low casts a well-nigh irresistible spell while spinning a Depression-era folk tale from the Tennessee backwoods.”