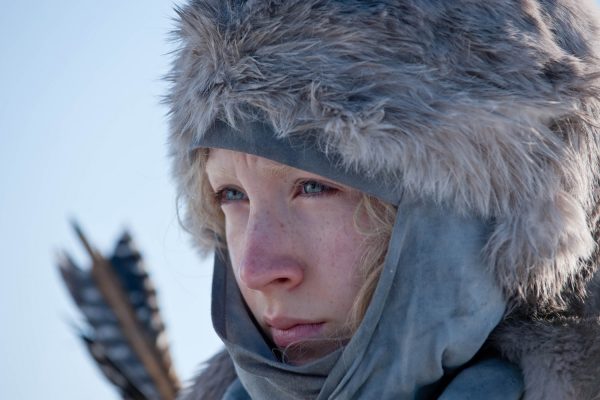 Opening across Canada at a theatre near you: a teenage girl takes on the CIA in the modern action fairy tale, Hanna; Russell Brand plays a lovable man-child in Arthur; medieval times get a bit dopey in the comedy Your Highness; and a girl gets back on her surf board after a shark attack in Soul Surfer.

Hanna is the fairy tale action adventure by Joe Wright, the director who brought us the period dramas Pride and Prejudice and Atonement, about a 16-year-old girl who has been trained since birth to be a weapon against one woman, and the CIA.

Eric Bana stars as Erik, an ex-CIA agent living in the wilds of Finland who has raised his daughter, Hanna, played by Saoirse Ronan, to be a perfect killer, honed to seek out the corrupt CIA agent Marissa, played by Cate Blanchett, and kill her.

Although Wright is not the first director you might expect to helm a project like Hanna, he has proven himself as a strong director already, and the best directors have no problem stepping between genres. Based on early reviews, Hanna is also looking like the best film opening in theatres this week, earning 71% fresh on Rotten Tomatoes.

“Joe Wright’s Hanna is an exuberantly crafted chase thriller that pulses with energy from its adrenaline-pumping first minutes to its muted bang of a finish,” wrote Justin Chang for Variety.

“In the end there might not be much to this tale other than titillation,” Manohla Dargis wrote for the New York Times, “but there’s plenty to be said for Ms. Ronan, who was the best thing about “Atonement” and holds her ground against forceful screen presences like Ms. Blanchett and Mr. Bana.”

The classic 1981 comedy Arthur, which starred Dudley Moore, gets a big screen makeover starring Russell Brand this week, with Brand playing the titular role as a sweet and funny billionaire who can’t seem to take life all that seriously.

Kept somewhat in check by his best friend and nanny, Hobson, played by Helen Mirren, the rich kid-at-heart spends his days doing whatever he wants, without any sense of purpose other than to amuse himself. His ideal lifestyle could fall apart though when one mishap hurts the family’s public image and Arthur is threatened with his worst nightmare: get married to the warped Susan Johnson, played by Jennifer Garner, or get cut off from the family fortune.

Arthur’s biggest problem with that threat isn’t just that he doesn’t care for Susan, but also that he’s falling for the cheerful commoner and tour guide Naomi, played by Greta Gerwig, a woman who shares Arthur’s lust for life.

Despite a solid premise and cast, and a reimaging that honours the original film, Arthur is not earning a lot of respect from critics.

“Of the myriad things the new remake of Arthur gets wrong,” Scott Tobias commented for NPR, “missing Arthur’s sadness may be the most damaging.”

While Bill Goodykoontz of the Arizona Republic gave the film a bit of praise, writing, “It seems like an odd choice for a remake 30 years down the line, as Moore’s portrayal is one of his best, and best-known, roles. But if you must, Brand is the man for the job.”

As the adage goes, if a trailer makes a movie look dumb, and the movies sounds dumb, you’ve probably got a dumb movie, which might explain why Your Highness is getting such terrible reviews this weekend.

As Peter Debruge of Variety wrote, “That skunky smell emanating from Your Highness ain’t pot; it’s the stink of miscalculation that surrounds an inside joke gone awry.”

And Amy Biancolli of the Houston Chronicle added, “The chief problem with Your Highness is its lack of imagination — its misuse and overuse of language and visual riffs that are only marginally amusing at best.”

Lastly this week comes the based-on-a-real-life-story of Bethany Hamilton, the surfer who lost her arm in a shark attack but managed to fight back to become a top surfer once more.

What may stand out the most about Soul Surfer, and as the title suggests, is the fact that the film is spiritually motivated and stays quite true to the Hamilton’s real-life religious beliefs.

“That Soul Surfer rates as a giant leap for this team speaks well about the conviction the movie’s actors bring to the material as well as the respect afforded the Hamilton family and their faith,” wrote Glenn Whipp of the Chicago Tribune.

Overall though the majority of critics gave the film moderately negative reviews. Kathleen Murphy of MSN Movies wrote, “Too bad that no-talent director Sean McNamara and a committee of screenwriters have dumbed down Soul Surfer to a simplistic mishmash of youth fellowship homily and Hawaii tourism ad.”