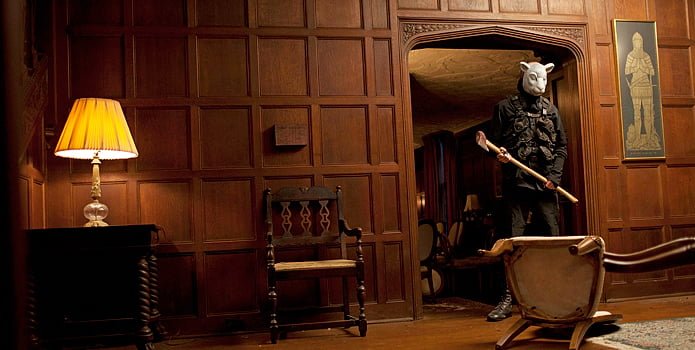 TIFF ’11 Midnight Madness: There will be blood 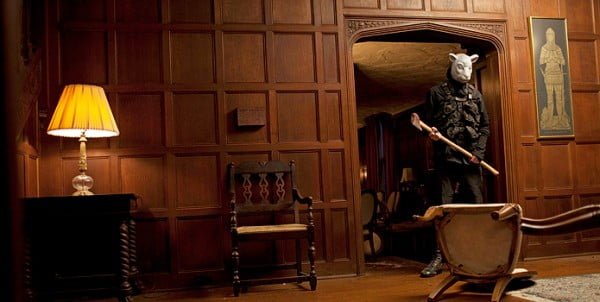 A scene from the Midnight Madness film You're Next

While dramas, documentaries and tearjerkers rule the day at the Toronto International Film Festival, it’s the bloody, supernatural and action-packed films that rule the nights at TIFF, and that’s thanks to Midnight Madness.

“Ravenous cinephiles will devour the roster of chillers, action thrillers and pitch-black comedies that fill this year’s slate,” said Colin Geddes, TIFF Programmer. “Martial arts assassins, cops and robbers, escaped lunatics and vampire ballerinas will take over Ryerson Theatre every night at midnight, and deliver the shocking and rocking experience that our loyal audience flocks to take part in, helping make these screenings so memorable.”

The Day – Douglas Aarniokoski, USA – World Premiere
In a post-apocalyptic future, an open war against humanity rages. Five survivors wander along rural back-roads, lost, starving and on the run. With dwindling food stocks and ammunition, an attempt at seeking shelter turns into a battleground where they must fight or die. Starring Ashley Bell, Dominic Monaghan and Shannyn Sossamon.

God Bless America – Bobcat Goldthwait, USA – World Premiere
Loveless, jobless and possibly terminally ill, Frank has had enough of the downward spiral of America. With nothing left to lose, Frank takes his gun and decides to off the stupidest, cruellest and most repellent members of society with an unusual accomplice: 16-year-old Roxy, who shares his sense of rage and disenfranchisement. From stand-up comedian and director Bobcat Goldthwait comes a scathing and hilarious attack on all that is sacred in the United States of America.

The Incident – Alexandre Courtès, France – World Premiere
George, Max and Ricky are in a rock band and waiting for their big breakthrough. Between small gigs and rehearsals they work in the kitchen of a high-security asylum for good pay at minimum risk – they have no physical contact with the inmates. One night just before dinnertime, a big storm shuts down the security system, the doors open and the lunatics break loose. Help is on its way and should soon arrive… they just have to survive until it does.

Kill List – Ben Wheatley, United Kingdom – Canadian Premiere
Eight months after a disastrous job in Kiev left him physically and mentally scarred, ex-soldier-turned-contract-killer Jay is pressured by his partner Gal into taking a new assignment. As they track their prey, they descend into a disturbing world that is darker and more depraved than anything they experienced on the battlefield.

Livid – Julien Maury and Alexandre Bustillo, France – World Premiere
The directors of 2007’s Midnight Madness hit A L’Interieur (Inside) return with a twisted gothic nightmare. A young woman and her friends break into a decrepit mansion looking for treasure, only to unlock a dark secret of unspeakable horror ready to dish out bloody punishment for their greed.

Lovely Molly – Eduardo Sanchez, USA – World Premiere
When newlywed Molly Reynolds returns to her long-abandoned family home, frightful reminders of a nightmarish childhood begin seeping into her new life. She soon begins an inexorable descent into evil that blurs the lines between psychosis and possession. From the director of The Blair Witch Project.

The Raid – Gareth Evans, Indonesia – World Premiere
Deep in the heart of Jakarta’s slums lies an impenetrable safe house for the world’s most dangerous killers and gangsters. Until now, the run-down apartment block has been considered untouchable to even the bravest of police. Cloaked under the cover of pre-dawn darkness and silence, an elite swat team is tasked with raiding the safe house in order to take down the notorious drug lord that runs it. But when a chance encounter with a spotter blows their cover and news of their assault reaches the drug lord, the building’s lights are cut and all the exits blocked. Stranded on the sixth floor with no way out, the unit must fight their way through the city’s worst to survive their mission. Starring Indonesian martial arts sensation Iko Uwais.

Sleepless Night – Frederic Jardin, France/Belgium/Luxembourg – World Premiere
When Vincent, a double-dealing cop, steals a big bag of cocaine from some drug dealers they counter by kidnapping and threatening to kill his son if the bag isn’t returned – fast. The swap is to go down at their headquarters in a big nightclub on the outskirts of Paris, but Vincent gets caught in a spiral of deception and betrayal and must fight his way through packed dance floors and dark corridors of the labyrinth-like club.

Smuggler – Katsuhito Ishii, Japan – World Premiere
After his dreams of becoming an actor go nowhere, 25-year-old Kinuta does nothing but gamble every day. Broke, framed and now neck-deep in debt, he is recruited as a smuggler – an underground mover of everything from dead bodies to illegal goods – but one cargo triggers the rage of a psychotic gangster hell-bent on revenge. By acclaimed cult director Katsuhito Ishii of Shark Skin Man and Peach Hip Girl and Funky Forest fame.

You’re Next – Adam Wingard, USA – World Premiere
From the director-writer team that brought Festival audiences A Horrible Way To Die in 2010 comes a new experiment in tension. A family comes under a terrifying and sadistic attack during a reunion getaway. Barricaded in their secluded country home, they have to fight off a barrage of axes, crossbows and machetes from both inside and outside the house. Unfortunately for the killers, one of the victims proves to have a talent for fighting back.