Pan Am Games – Toronto 2015: A Look Inside The Athletes’ Village As someone who has lived in hotels, sometimes for years at a time, and has written innumerable articles on hotels of all varieties, many for The GATE, be they old and historic, small boutique hotels or brand new hotels–but one kind of temporary visitors residence I have never had the occasion to visit was an athletes’ village like those constructed for Olympic Games or Pan Am Games–until now.

As the hosts of the Toronto 2015 Pan Am/Parapan Games, organizers were charged with the daunting task of building an athletes village that would be bold, state of the art modern, centrally located and able to comfortably house 7100 athletes and team officials during the Pan Am Games and 3200 hundred athletes and teams officials for the Parapan Games. Well, I am here to say, having spent the weekend at the athletes village as part of a special advanced look given to a writers and reporters, that they have not only pulled it off, they have done so in a spectacular fashion and in a way that leaves a positive and permanent legacy for the city of Toronto.

I have been watching the construction of the various athlete residences and support buildings in the Cherry Street/Front Street areas over the last few years and could tell it was going to be impressive just based on those observations–the finished village is twice as impressive as I imagined.

Allen Vansen, EVP, Operations, Sports and Venue Management, told me as we strolled the village, “We toured around other athletes villages at other games, London, Guadalajara, to see what they were offering and how we could take the best of what we saw and improve upon it and not just improve upon it but make our athletes village entirely reflective of this city and where we are in the city, which is in the most vibrant and the most picturesque part.”

Before actually checking in to my room I was shown the village medical facilities which solely relied on natural over the counter treatment keeping all the athletes’ health in mind, a series of trailers strung together that can deal with any injuries or illnesses suffered by athletes during the games. Then the games room, a large tent filled with billiard tables and video games and couches for athletes to relax in. Then it was on to the fitness centre, an 82,000 square foot gym and pool facility that will become a YMCA after the games. It is stocked with tonnes of equipment, some of it so state of the art that it is not even available on the market yet.

One of the swimming pools has a hydraulically operated bottom so the depth of the water can be increased or decreased.

It was then on to the Main Dining Hall–a dining room/kitchen of dimensions so immense it was hard to take it all in without taking a long stroll from one end to the other.

“By the time the games end we will have served over 464,000 meals,” said Allen Vansen. “Even when breaking the numbers down it is still hard to imagine… 80,000 portions of chicken breast, 75,000 litres of ice cream…” At dinner a bit later on, and even with the whole kitchen not completely up and running yet of course, I sampled an array of dishes that athletes will be eating. I had some salmon that was terrific, some steamed vegetables, some green salad and potato salad, I sampled a pasta dish and a slice of made-from-scratch on site pizza, and all of it was not only tasty and well prepared, it was very much so. For dessert I had some apple pie that looked and tasted as if it were home made, it was that good. 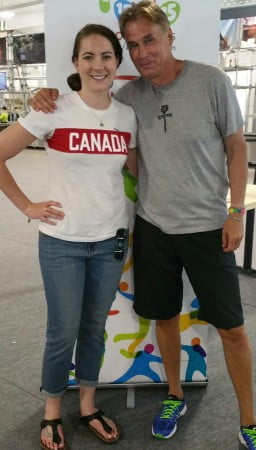 It was now time to tour the various athletes residences and to give an expert overview on the athletes experience at such games was the delightful Julia Wilkinson. Julia is an ex-Olympian and Pan Am Games veteran, as a swimmer, and is now part of the TO2015 organizing committee; during the games she will act as a liaison between the media and the athletes in the village.

I was peppering this poor woman with numerous questions on her various experiences because I have enormous admiration of Olympians and athletes who compete at this level not just for what they do but for the example they set and from the stories I was getting from Julia during our walks through the various facilities told me that while being obviously gorgeous, with great smile, she was also as tough as nails both physically and mentally and was the right person for this job at the Pan Am Games.

“One of the things I wanted to contribute to these games was to take my experiences in athletes villages in places like Delhi, Beijing and London and find ways to make improvements based on what I knew from experience was needed,” said Julia Wilkinson. “It is really interesting how it is the smallest details that can make the biggest difference, like a small drying rack in each room,” Julia said.

“As a swimmer I knew how bothersome it was to come back to your room with a few wet bathing suits, wet towels, wet training wear, and trying to find places to hang them to dry. A small drying rack solves that–and that is one less frustration for the athlete to deal with.”

Julia also explained that the comfort of the beds was something she was also very concerned about. Given the nature of these accommodations no one will expect the beds to be on a par with those found in suites at the Four Seasons but neither should they be on a par with World War II field cots. “We [members of the organizing committee] tested out several different kinds of beds,” said Julia Wilkinson. “We were looking for beds that we would be comfortable sleeping on ourselves.”

And speaking of the Four Seasons, one of the residences I toured has a view of the lake and the Toronto skyline so complete and spectacular that any big hotel chain would trip all over themselves to secure. As these residences for the athletes were all built from scratch they are all brand new and have that brand new feel. When I finally checked in to my room I found it roomier than I thought and quite comfortable.

The bed, true to Julia Wilkinson’s promise, was very comfortable, big windows, good light, there was a comfortable sized bathroom that came with full sized shampoos and soaps in my suite which had two bedrooms capable of sleeping four and a small living room. The WiFi in the residences is among the best I have ever encountered in hotels. It was instantly connected, very strong and reliable. I slept comfortably (of course that is easy for me to say not having the stress of competition weighing on me since my event the next morning was taking selfies) and could not find anything to even remotely complain about–storage space was sufficient, under each bed was a lock box to store valuables and everything inside and outside the suites was clean.

After having this unique experience of stepping in to the (running) shoes of a world class athlete, coming to a world class competition like Toronto 2015 is, I can honestly report that the organizers and planners and those who executed the building of this athletes village, despite the fair amount of doubt and cynicism they have had to deal with, have delivered something amazing that not only the seven thousand plus athletes will love but all of us who call the city of Toronto home will also enjoy for a long time to come.