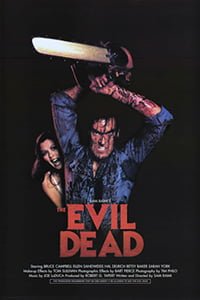 The Revue Cinema on Roncesvalles Avenue in Toronto is hosting a bloody special Halloween night at the movies, and you’re invited.

The night kicks off on October 31 at 7:00 PM with Sam Raimi’s classic The Evil Dead, starring Bruce Campbell. This is the film that not only launched the career of Campbell as a b-movie legend, but gave Raimi and his team the chance to make it big (Raimi of course went on to make a number of horror films, and the massively popular Spider-Man series). Did I mention this is a brand new 35mm print?

Then, at 9:15 PM stay around for the grim, and gruesome Hatchet – where a group of college kids have to avoid getting killed off by a murderous freak. As you might expect, not everyone makes it to the end credits. The film stars Joel Moore, Perry Shen, and horror master Robert Englund.

And don’t forget to show up in your best costume – prizes will be awarded from The GATE, The Film Buff, and Anchor Bay Entertainment.

The Revue is located at 400 Roncesvalles Avenue, just south of Howards Park. Head over to www.revuecinema.ca for more on the cinema.