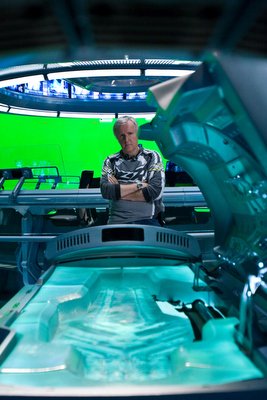 James Cameron on the set of Avatar

Comic-con: Anyone who follows movie or television news has probably heard a lot about last week’s San Diego Comic-con. The annual geek-driven event has always been the place to be for sci-fi and fantasy fans, but recently studios have been deluging the Comic-con with stars, directors, and producers to promote some of the big upcoming films and television series.

This year was certainly a huge event, and it has gotten hard to report on even a fraction of what was announced and revealed during the four days of the event. Here are just a few of the big topics discussed at this year’s Comic-con.

Avatar – Director James Cameron gave fans a remarkable 25 minute 3-D preview of his upcoming 2009 film, Avatar. Cameron discussed the technology used in the film at length, and also revealed that he is going to make free 3-D footage available on August 21 for anyone who wants to see a sneak peek of the film.

3-D – Speaking of 3-D, the topic was a big one at Comic-con, coming up among panel discussions from most of the major studios. Among the titles mentioned, Disney seemed to be the biggest proponent, revealing that Tron Legacy, Toy Story 3D, A Christmas Carol, and Alice in Wonderland would all receive the 3-D treatment. Cameron and director Peter Jackson also revealed that they may revisit older films to re-release them on 3-D, including Titanic and Jackson’s Lord of the Rings trilogy.

Tron 2 – And while we’re on the topic of Tron, Disney put a major push behind the Tron sequel, which got a new moniker: Tron Legacy. Disney also released a teaser trailer on the internet, which actually debuted at last year’s Comic-con, and during the final moments it is revealed that the film will come out in 2010.

Lost – There wasn’t much in the way of definitive Lost information this year, but the producers put on a great show with a few of the stars. They did reveal though that there will not be any more time travel or flash forwards, Charlie and Boone make some sort of appearance, and yes, Juliet and Daniel Faraday are coming back as well. Lastly, they promised repeatedly that there will be answers to all of the big questions. Watch the panel discussion videos, with all of the funny appearances by cast members, here.

Twilight: New Moon – The teen vampire film gave fans lots of time to scream and, well, drool as director Chris Weitz, and stars Ashley Greene, Kristin Stewart, Taylor Lautner and Robert Pattinson all took to the stage to talk about the new movie.

Iron Man 2 – Director Jon Favreau gave fans exactly what they wanted to see with loads of movie footage. In attendence were stars Robert Downey Jr., Scarlett Johannson, and Don Cheadle. The footage also showed Samuel L. Jackson once more as Nick Fury and the film will, apparently, lays some ground work for the planned Avengers movie.

If you want to really explore some of what happened at this year’s Comic-con, I highly recommend the fantastic LA Times Blog, Hero Complex.

The Simpsons: Fox and The Simpsons have announced some of the celebrity voices that will be taking part in the 21st season of the long-running series.

Stars expected for the next season include Sarah Silverman, the return of Anne Hathaway, the Smothers Brothers, Seth Rogen, Jonah Hill, Neve Campbell, the Manning brothers, and a pre-recorded session with the now deceased Eartha Kitt.

One of the most notable episodes for me includes Chris Martin of the band Coldplay. In the episode Homer wins a huge lottery and hires Coldplay for a private concert for the family. As executive producer Al Jean noted in an EW.com article, “When Bart goes to the bathroom, Coldplay has to stop.”