Film Friday: ‘Rise of the Planet of the Apes’ and ‘The Change-Up’ 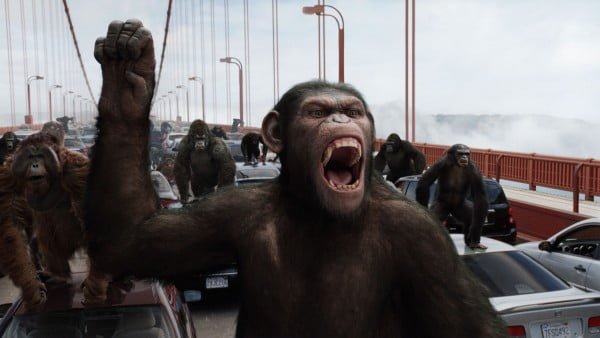 Rise of the Planet of the Apes

Opening at a theatre near you this weekend: humanity has a new threat to fear in the prequel to the famous franchise, Rise of the Planet of the Apes; and Ryan Reynolds and Jason Bateman star in the unfortunate comedy, The Change-Up.

Despite what should have been another disastrous Planet of the Apes movie, like Tim Burton’s terrible film from 2001, director Rupert Wyatt has accomplished something impressive with his simian prequel, and that is largely thanks to one actor and a cleverly paced plot.

Set in a reasonable facsimile of the present, in a world where we’re ready to send Earth’s first manned mission to Mars, Rise of the Planet of the Apes has James Franco playing the scientific brainiac Will Rodman, a researcher trying to discover a cure for Alzheimer’s disease.

Working with apes in a private scientific facility, Will has developed a serum that can actually reverse damage done to the brain, but when a disaster leaves his star ape dead, he doesn’t know what to do until he finds a surprise: a baby ape that he names Caesar.

Caesar, played expertly by Andy Serkis through the motion capture process, was never experimented on with Will’s drug, but as the offspring of one of Will’s apes, he has inherited the effects of the drug which makes him much smarter than any other animal. Although Will was supposed to have all of the apes put down after the failed experiment, he keeps Caesar secretly in his home while he cares for his father Charles, played by John Lithgow, who is suffering from Alzheimer’s.

Over the years, Caesar grows up, and as Charles’ condition worsens, Will takes a leap of faith and gives his experimental drug to his father, which, for a time, reverses the effects of the disease. Unfortunately, the effects are not permanent, and when the drugs seems to be wearing off completely, Will starts developing a much more virulent drug that he hopes will be able to permanently cure Alzheimer’s, but he doesn’t realize exactly what he’s creating.

Meanwhile, Caesar has grown up, and he’s becoming more thoughtful, adventurous, and slightly dangerous as his violent tendencies take over. It’s after one incident that Caesar goes too far, leading to his eventual capture, which forces him into confinement with a large group of other apes that immediately seem to dislike him.

Following Caesar’s life almost completely from birth to his fateful rise to full awareness and power, Wyatt’s film is much more of a drama than the trailers may have you believe, and that centres squarely on Serkis’ performance. As before, in Lord of the Rings and King Kong, Serkis delivers a powerful performance, but this time he is given the opportunity to go even further with this emotional portrayal of this creature that is going through a metamorphosis like no other. It would be impossible to imagine this film without Serkis, who delivers what I can only call an award-worthy performance that is sweet and dark at the same time.

The rest of the cast is unfortunately not quite as awe-inspiring, although Franco does at least turn in a better performance than he did on the Oscar broadcast. Franco, Lithgow, and even Brian Cox and a bullying Tom Felton deliver adequate performances, and even have a few shining moments, but they are overshadowed by Serkis in every way, although I would blame part of that problem on the frequently cookie-cutter dialogue.

Likewise, I can’t help but point out that Rise of the Planet of the Apes has a silly plot, featuring an all-important MacGuffin–the thing that gives science fiction films a driving premise–that feels like it might have been inspired by 12 Monkeys. Wyatt’s strength though is his ability to make Caesar’s story compelling, and that is what makes this film work in setting up what I can only imagine to be a new future for the Planet of the Apes franchise. By far the film’s most amazing moments are when we are watching Serkis work this character, and when we finally see the power of the apes against humanity.

Enjoyable though it was, the ending left me feeling like this film didn’t have enough plot to work with, which also makes this prequel feel like it needed to be propped up against a larger story. No doubt a remake of the original Planet of the Apes will fill that need in the future, but as the film stands, it is best enjoyed as a sometimes jokey reference to the original film, and through Serkis’ wonderful performance as the future leader of Earth’s dominant species to-be.

Also opening this week is the unfortunate, juvenile comedy, The Change-Up, starring Ryan Reynolds and Jason Bateman as two friends that inadvertently switch bodies when they both wish they could be the other person.

Reynolds of course plays the ladies man who moves from woman to woman without any attachment, while Bateman is the responsible married man who has a caring family, but of course both of them wish they could do something different and poof, that’s what happens.

Getting slammed by the critics this week, The Change-Up is looking like a sad mistake for both Reynolds and Bateman, two of my favorite actors who clearly chose a bad film this time out.

While Roger Ebert of the Chicago Sun-Times wrote, “It has a low opinion of men, a lower opinion of women, and the lowest opinion of the intelligence of its audience.”