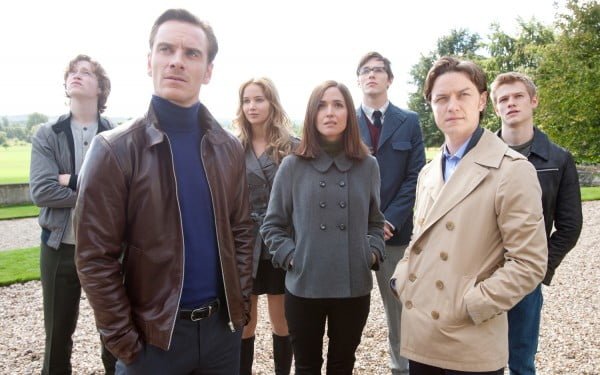 The cast of X-Men First Class

Arriving this week on Blu-ray and on DVD: James McAvoy is the young and dashing Charles Xavier trying to save the world from evil mutants in X-Men First Class; Saoirse Ronan stars as a 16-year-old reclusive killer in Hanna; and a look at Brian DePalma’s notorious Scarface on Blu-ray.

Joining with Moira when Charles realizes that there are dangerous mutants in the world, the trio gathers a young team of mutant cohorts as they meet the head of Division X, played by Oliver Platt, where they also join forces with Erik.

Using the intrigue of the Cuban Missile Crisis of the sixties as a backdrop, X-Men First Class is stylish, witty, and funny, and features a number of cameos, including a brief glimpse of Rebecca Romijn as Mystique, not to mention an equally quick moment with Hugh Jackman as Wolverine.

Vaughn’s film hit all the right points as a fun summer blockbuster, and at home the film satisfies all the necessities for a smart, witty popcorn adventure. I also appreciated the film because, for fans, it very, very faithfully recreates the characters from the original comic books, all the way down to the costumes, and even Beast’s transformation from a brilliant scientist with ape-like feet to a big, blue creature.

Hanna is a beautiful, edgy, and heart-racing fairy tale thriller by Joe Wright–the same director who brought us the period dramas Pride and Prejudice and Atonement–about a 16-year-old girl who has been trained since birth to be a weapon against one woman, and the CIA.

Eric Bana stars as Erik, an ex-CIA agent living in the wilds of Finland who has raised his daughter, Hanna, played by Saoirse Ronan, to be a perfect killer, honed to seek out the terrifying CIA agent Marissa, played by Cate Blanchett, and kill her.

Hanna is not your average cat-and-mouse thriller though, although Ronan does play both sides of those roles throughout the film, but Wright’s film is actually more of a coming-of-age story for a character who could have been plucked from the pages of the Brothers Grimm’s fairy tales, which are heavily referenced.

Although the story is moderately weak, and the script could have been stronger in places, Wright sets everything up perfectly so Ronan can be the one and only star of this film, and she easily makes Hanna seem like a lost child in the woods one moment, before she fearlessly cuts someone up the next. Eric Bana and Cate Blanchett are well cast opposite Ronan, but they are definitely co-stars next to the young star’s sweet and killer attitude.

Wright also sets Hanna apart from most other films this year thanks to his tremendous filmmaking team, including stunning cinematography by Alwin H. Kuchler, genius editing by Paul Tothill, not to mention art direction, sets and costumes that literally make the film seem almost like a twisted dream. Big kudos also have to go out to The Chemical Brothers, who weave a fantastic score throughout the film that is always present, but never oversteps its place.

The Blu-ray/DVD double pack from Alliance Films has a lot of great features worth checking out, including a superb commentary by Wright that delves deeply into how the film came to be made. There are also four above-average featurettes on the making of Hanna, deleted scenes, and an alternate ending. There could have been a bit more punch to the list of features, but overall a great package for an eye-popping thriller.

One of Brian DePalma’s greatest filmmaking achievements, and one of the best gangster movies of the eighties, arrives in a new Blu-ray limited edition steelbook this week, giving new and old fans a chance to enjoy one of Al Pacino’s greatest and fiercest performances.

Written with sheer operatic wisdom by Oliver Stone, Scarface stars Pacino stars as Tony Montana, a Cuban criminal banished to Miami where a drug lord picks him up to do his dirty work. As Tony works his way deeper into the cesspool of drugs, murder, and racketeering–not to mention buckets of blood–he quickly finds himself climbing to the top of the empire of criminals that rules Miami, making a few friends, and killing his enemies along the way.

Featuring Robert Loggia as Frank Lopez, and Michelle Pfeiffer as the drug-addicted mistress, Elvira, Scarface endures as a classic but brutal look at organized crime from the over-stylized view of what has become a modern stereotype. That stereotype endures, however, thanks at least in part to DePalma’s violent, legendary film.

Scarface may not be the best crime film ever made, but it’s mesmerizing, disturbing, and still a film that needs to be seen to be believed.

The steelbook Blu-ray package has a lot of extras, including some standard definition ones that have been around before, but the best of the features is by far The Scarface Phenomenon, a documentary that looks back at the film’s release, and what it meant at the time to audiences and critics.