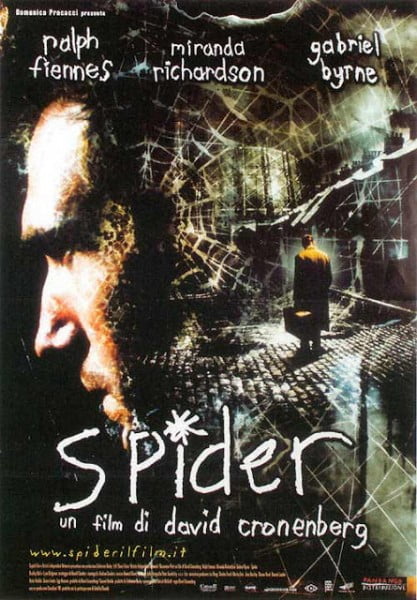 After all the praise I’ve heard for this film, I expected something that would change my life. Maybe a plot that would make me think about movies differently… or acting that would inspire me so much that I’d want to rush out, take classes, and try to become a famous actor myself.

Problem is, I don’t care what other reviewers tell you, in my eye, Spider is essentially a character movie, and not a particularly deep one at that. It follows the life of Dennis ‘Spider’ Cleg (played by Ralph Fiennes), reliving his childhood as he wanders the streets of his youth. As the story unfolds, we see him loose himself in the moments that seemingly devoured his youth and helped turn him into the mentally challenged man that he is today.

The film starts as we discover Spider (a nickname that he got because of his love for a story that his mother told him when he was young and because of his love for creating webs of string in his room) walking the streets, unintelligibly mumbling thoughts to himself and picking up anything he finds along the street. From there, the story slowly plods its way back and forth between today and yesterday as Spider finds himself in familiar places, like his father’s favorite pub, or an old garden and shed that his father used to go hang around.

Fiennes cleverly brings an eerie quality to Spider’s ramblings and odd writings, and Bradley Hall does a magnificent job as the young Spider. Likewise, Miranda Richardson as Yvonne, Mrs. Cleg, and Mrs. Wilkinson is startling every time she appears, but it’s Gabriel Byrne as Bill Cleg that bothers me just a bit. He certainly does a wonderful job of playing the subtleties of Mr. Cleg, but there doesn’t seem to be quite enough meat to his dialogue at times.

My real beef with the film though is the weak script. Patrick McGrath, the original author of the book who also adapted the story to film, does nothing to make a meaty story and David Cronenberg, who both directed and helped with the screenplay, doesn’t seem to really want to flesh out more of the story or characters. While Spider is a miraculously well thought out character who experiences a significantly dynamic event that obviously was a catalyst in his life, his story is slow and feels just a bit too empty.

If I could rate the film on the performances, Spider is indeed a great film, but I found the unfulfilling story far too empty to really engross me. The ending is interesting, and twists in just the right way to really startle you for a second, but I don’t think it makes a lot of sense. Throughout the entire film it’s obvious that we’re seeing the past the way Spider saw it, but once the truth is revealed, I’m not sure the surprise is enough to really complete the film.

Visually, I should say that this is a stupendous film, and Peter Suschitzky does a wonderful job with Arvinder Grewal (the art director) in fleshing out the landscape of Spider’s world. It’s just not nearly enough to bring McGrath and Cronenberg’s vision to life. The best idea, I expect, is for you to go off and read the novel, because chances are good that we’re just missing something grandiose that doesn’t translate onto the big screen where characters aren’t enough to make a story.