Film Friday: ‘Quantum of Solace’ & ‘Boy in the Striped Pyjamas’ 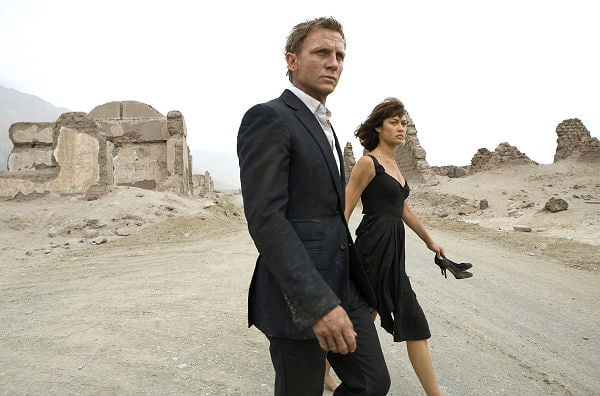 Daniel Craig as James Bond in Quantum of Solace

His name is Bond, James Bond, and he’s back in Quantum of Solace with a fight to take down the man who killed the one woman he loved. Also opening this weekend, John Boyne novel, The Boy in the Striped Pyjamas shows the friendship between two boys in the midst of the terrors of the Holocaust. Plus, in select markets, check out Jean-Claude Van Damme as himself in JCVD.

With a trail of money to follow, Bond has to hunt down the organization known as Quantum, led by the dastardly, downright evil, Dominic Greene (played by Mathieu Amalric). And while there are new women to be wooed, including the latest Bond babe, Olga Kurylenko as Camille, all that seems to matter is that Bond gets his revenge.

Forgiving that last bit, the new Bond film sounds like an easy winner. Early reviews out of Europe, where the film has already been playing for two weeks, paint a very sunny picture for it as well.

Praise is high for nearly every aspect of the film, including Craig’s craggy performance, the new villain, and the always blow-your-mind special stunts and special effects. It also should be pointed out that mounds of credit are due to Canadian screenwriter Paul Haggis, who so ingeniously stripped the crap out of Bond last time out, and rewrote the agent’s whole style. (I’ll give marginal credit to screenwriters Neal Purvis and Robert Wade too, but since they helped write the gawd-awful Die Another Day and The World Is Not Enough, I’ll keep the praise to a minimum.)

James Christopher of The Times Online gave Quantum of Solace a glowing review, giving it four out of five stars. Comparing the film to its predecessor, Christopher wrote, “If anything, the crunching chase sequences in Quantum of Solace are even more magnificently dangerous. And the daredevil leaps and tumbles through glass roofs are just as sensational as the splintering high-speed pyrotechnics. But it’s the amount of heartache and punishment that Craig’s new Bond absorbs that makes him look so right for our times.”

The Boy in the Striped Pyjamas
If Bond’s latest antics don’t quite thrill you, a gripping, new drama also opens this week, but it certainly comes with a few disclaimers.

John Boyne’s famous novel, The Boy in the Striped Pyjamas, is the terrible story of a German boy who befriends a Jewish boy within a Nazi concentration camp. Asa Butterfield plays Bruno, the son of a high-ranking soldier who realizes he is confused by how the Nazis are treating people within the camp. On meeting Shmuel, played by Jack Scanlon, Bruno realizes he shouldn’t be playing with the boy, but decides that he has to help him somehow. Rebuking the image he has had of his father, who he once believed was heroic, Bruno and Schmuel make a plan that probably can’t succeed, but has to be tried.

Blending a child’s perspective with this terrible subject is of course a tough choice, and one that won’t play out well for everyone. This is also a film that blends wonderful moments equally with the terrible truths of the Holocaust. As such, critics have had a hard time with the film and are slightly torn on how well it works.

“Not quite on par with Life is Beautiful or Schindler’s List but it’s still a powerful film,” Edward Douglas wrote on ComingSoon.net, “and a more than worthy addition to the genre due to its unique perspective.”

On the other side though Stephanie Zacharek of Salon.com had a hard time with the film and its perspective. “Not everything in life, or in history, needs to be framed in terms of things children can relate to,” she wrote. “I’m not talking about shielding kids; I’m just saying that some ideas are so horrific that they shouldn’t be framed in childish terms.”

JCVD
Last of all this week, for those of you in Toronto, Vancouver, or Montreal, you have to go check out my favorite film of the year.

JCVD stars real-life action hero Jean-Claude Van Damme as himself. Played with a miserable glee, Van Damme gets caught up in a hostage situation in his home town of Brussels, where a group of people are being held in a post office. Outside, the police try to work out a deal, but somehow think that Van Damme is actually behind it all.

While this may shock a lot of people, JCVD is a funny, enjoyable drama that gives equal time to Van Damme the star and Van Damme imagined as a real, aging actor who can’t quite get the roles he wants any more. The gritty quality of the film stock is also mesmerizing, and adds to the incredible mood.