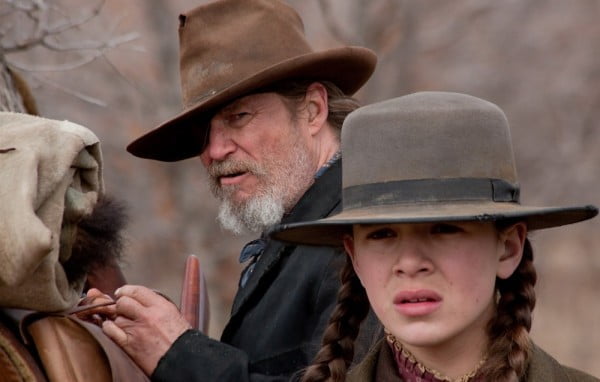 Opening this week, just in time for the holidays: Jeff Bridges stars in the Coen brothers’ Western, True Grit; Jack Black is off to the land of the wee folk in Gulliver’s Travels; Robert De Niro and Ben Stiller are back for another round in Little Fockers; plus a look at Barney’s Version.

The Western is alive and well once more, thanks to Joel and Ethan Coen.

Remaking the classic John Wayne film of the same name, which is based on the book by Charles Portis, the Coen brothers deal out their particular blend of dark humour and tense thrills with Jeff Bridges in the lead as Rooster Cogburn, a U.S. Marshal trying to help a young woman, played by newcomer Hailee Steinfeld, avenge her father’s murder.

Josh Brolin stars as Tom Chaney, the murderer on the run from Cogburn, and a Texas ranger, played by Matt Damon.

This is a classic retelling of Portis’ original tale and like other adaptations by the Coen brothers before, it follows the source material religiously, from the story to the old fashioned dialogue.

Earning the best reviews of the week, and making it one of the best reviewed films of the year, True Grit has earned solid reviews from all but a few critics.

Colin Covert of the Minneapolis Star Tribune wrote in his review, “It’s a tonal mash-up no one but the Coens could deliver, the finest, most intelligent Western since Unforgiven, with the funniest public hanging since Blazing Saddles.”

While Peter Howell of the Toronto Star wrote, “In choosing not to reinvent the wagon wheel with True Grit, the Coens ironically seem radical by being conformists. There’s truth and beauty in their faithfulness, though, and a reminder never to presume too much about these sibling ciphers.”

One of the few negative reviews I could find comes from Rex Reed of the New York Observer, who wrote, “If there’s one thing I don’t need in my Christmas stocking this year, it’s a sorry, lumbering and unasked-for remake of the 1969 sagebrush saga True Grit.”

Also opening this week in theatres…

The film co-stars Jason Segel, Emily Blunt, and Billy Connolly as Lilliputians, but despite the fairly impressive cast, the film is not doing so well with most critics, earning just 27% on Metacritic.com.

Although Kyle Smith of the New York Post enjoyed the film, writing: “Black was already the world’s biggest little kid, and he might be the only actor who could have made this movie such nimble fun. No matter how thin the concept, Black always manages to make it his own.”

In what I can only call one of the most unfortunate and useless sequels of the year, Robert De Niro and Ben Stiller star in this follow-up to the 2004 comedy, Meet the Parents.

This time out Stiller, as Greg Focker, is trying to prove himself again to his wife and the in-laws by getting his children into a better school, fixing the house, and dealing with his finances. This all of course goes exceedingly badly, just like the film, apparently.

As you may have guessed, most critics have panned the film, with Sean O’Connell of the Washington Post calling it a “lump of coal” in our collective “cinematic stockings”.

And Andrew O’Hehir of Salon.com wrote, “They kill me, these guys. No, seriously. If they make any more of these movies, they might as well kill me.”