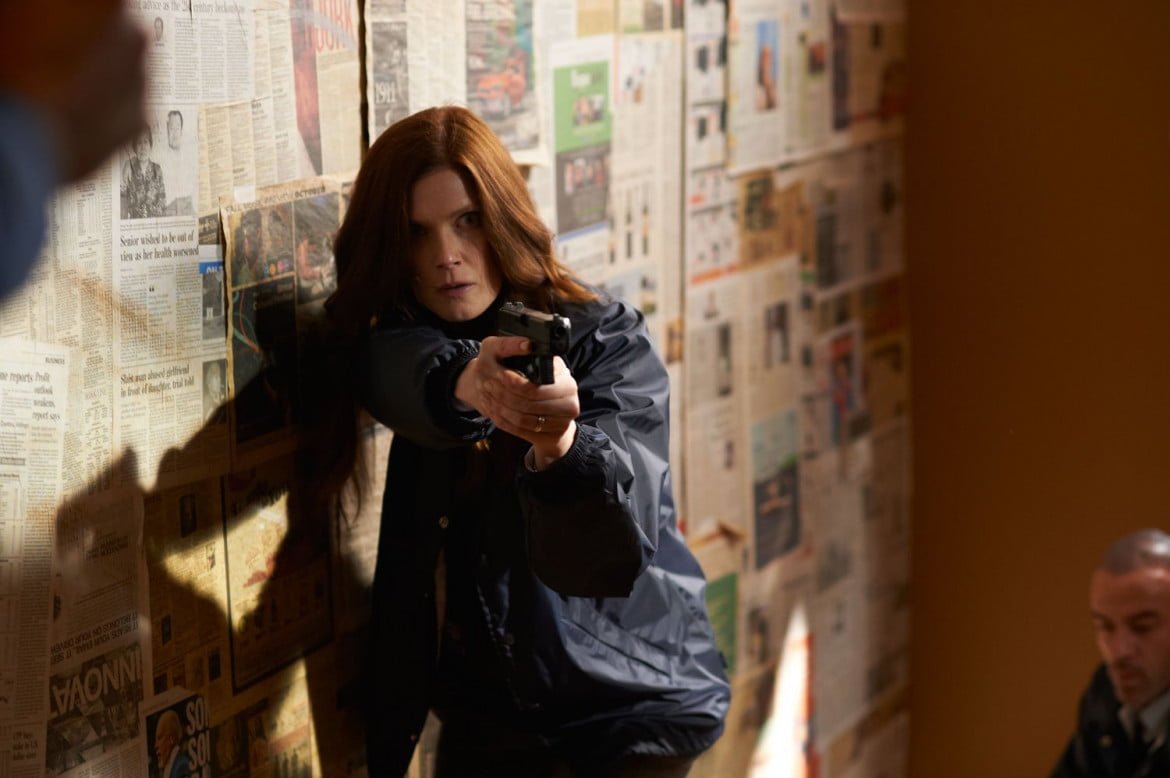 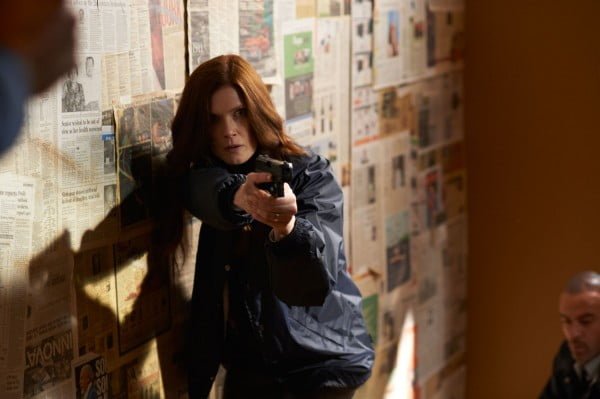 Cops on television–much like their real-life counterparts–have to be tough, clever, and exceedingly ambitious, but when we imagine a detective, the first image is a middle-aged man with a doughnut in one hand and a flunky partner. Thankfully, Showcase’s original series King has a different sort of detective on the streets, and she’s not what you would expect.

Amy Price-Francis stars as Jessica King, a homicide detective with a sharp eye and a sharper tongue who finds herself leading the Major Crimes Task Force in Toronto after the previous detective had a very publicly televised meltdown. As the head of this task force, King is charged with leaping into cases that are falling apart, and dealing with everything from murders and rape to robberies and gang violence, using her skills to find things that others have missed.

With the series now in its second season, debuting on Showcase in Canada on February 29, the first season has just been released on DVD, and I had a chance to interview the show’s star, finding out what it takes to play this fresh and original wise-cracking cop.

Andrew: So, looking back, what made you want to play Jessica King to begin with?

Price-Francis: “Plain and simple, the writing. This writing, for an actor, is an incredible gift, and the creation of this character, again, is just dreamy. It doesn’t come along very often, and I’m well aware how lucky I am.”

“She drew me in. It was love at first read.”

Andrew: We don’t get a lot of really strong female characters in Canada, maybe not even on television at all, but she’s got a lot of story to tell. Would you say the character has progressed a lot from the first to the second season?

Price-Francis: “Absolutely, and that’s what makes our show stand out. We do have the procedural elements, but we delve into her personal life; we know what’s going on with her, we know what she’s dealing with–what struggles she’s having at home, and we get to watch somebody, like anybody out there, who’s trying to find that balance, and how our work affects our life and how our life affects our work. It’s not an easy thing I think for anybody to find that balance, it’s a never-ending journey I’d say.” 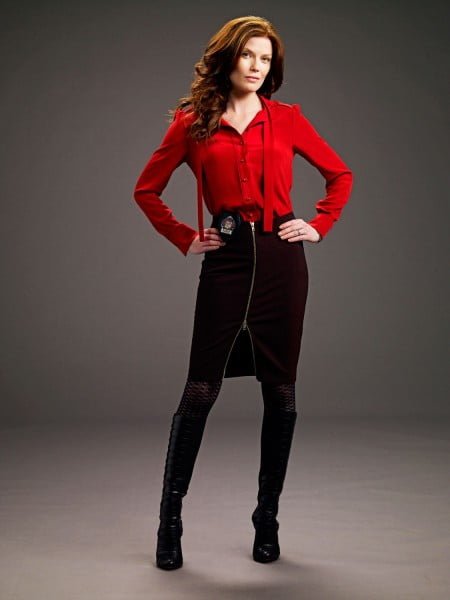 Andrew:What would you say makes her different from when the series started to season two?

Price-Francis: “Well, she’s in a different place. When we meet her again, she’s pregnant, so it’s been a dream of hers for a long time–throughout the first season when we unfortunately got to follow through her difficulties. Of course, in the season finale last year she does find out she’s pregnant and that’s just a beautiful thing, it’s a wonderful thing. It fills a huge, huge part of her life, that she’s been looking to fill. She continues to work on her marriage and continually gets these amazing cases.”

“We also have two new wonderful actors in the show, on the task force–Karen Robinson and Rossif Sutherland, and there’s a renewed sort of excitement this year, and she’s always going to be full of zest, and full of adrenaline, desire and focus, and attention–but she’s in a real good place.”

Andrew: Would you say you have a favourite episode from the first season, that stands out from the rest?

Price-Francis: “Do you know what? It’s hard to remember what the last episode was that we shot here. To be honest, I think I’ve only seen four of the episodes.”

Andrew: Oh really? Do you usually avoid seeing your own work, or have you just not had time?

Price-Francis: “To be honest, it depends what it is. Some jobs I’ll be more interested in watching than others because I want to see if I pulled it off or if there’s something really different for me. Sometimes I know the work wasn’t good, so I won’t put myself through the excruciation of witnessing it, because I sort of knew it when it was happening.”

“For this, I think it’s a wonderful show–I understand it’s called King and that’s the character I play, but I am in it an awful lot, and sometimes I’ve just had enough of myself I think. So, once I get over myself, and once I get this boxed set–I’m excited… maybe I can get my hands on one and watch this thing.”

Andrew: How has it been so far in the second season working with Rossif Sutherland?

Price-Francis: “He is the most charming, delightful soul you’ll ever meet, and obviously it goes without saying an extraordinary actor to boot. He’s been nothing but a great addition, to be honest. He’s lovely as a person to have around and everybody was charmed and fell in love with him within seconds, and his work has only added to the show.”

“He’s got a lovely, really interesting character to play, and no one else could play him like he does. Again, he’s added so much that I think people will notice right away in the second season.”

“We also have another wonderful actress who has joined our team as well; Karen Robinson, who in her own right is just something else. She really is. So, the dynamic is different this year, but it feels like there’s a bit more of a vibrancy. I think too, the first season everybody is trying to work through the kinks–we’re all learning as we go, which we continually are, but you learn things as you go and the writers have adapted certain things, and of course we as actors have, the producers have, and the crew have, so hopefully the audience will notice that things are a bit tighter.”

Andrew: Do you think the fact that Toronto is the setting for this show, which is shown off frequently, makes the show feel different?

“First and foremost I think we’re all really happy and proud to be able to represent Toronto. It’s my home, it’s our home, you know, and it’s a beautiful city and there’s great, wonderful people here and I think we have a lot to be proud of, and again, even something the audience will notice this year–Toronto becomes almost a character unto itself. There’s a bit more footage of the city going on. Of course we continue to go to great locations that people can identify, and that represent this great city, but there’s some footage in there that really makes Toronto a character this year. Again, that adds to the vibrancy and the energy of the show as well.”

Andrew: Does the subject matter of the series weigh on you at all, since it does revolve around murder and some major, tough crimes?

Price-Francis: “You know what? There have been a couple of cases that have been hard for me to shake, to be honest, but I got the lucky Detective Sergeant job because I get to take off the costume, close the script, and go home. It is real for me while I’m here, and of course the goal is that it’s real for an audience, but, for the most part, I leave work at work.”

“I mean, she’s always with me and I’m always thinking about her, because that is part of my job, but to be honest I have never laughed so hard on any set, with any group of people.”

“Funnily enough, that’s something, in the research that I did, in regards to real detectives–especially homicide, which is where King comes from–they tend to have a real… there’s a defensive humour in there. It’s a necessity. You know, it becomes a necessity, and it can be a very dark, black humour, but with the things that they see, with the subject matter, day in and day out, you need it to survive.”

“So, in a way, that has permeated things. We all as actors, as people, we all tend to just joke around a lot anyway, so we’re continually laughing and, you know, we’re playing. We get to play for a living, and we all love what we do so we celebrate that every day.”

Andrew: So, what comes next for you once season two is done filming?

Price-Francis: “A project called life, after we wrap this season up. I’ll probably get bored within a week, but unemployment and life for a couple of weeks, and we’ll see what happens after that.” 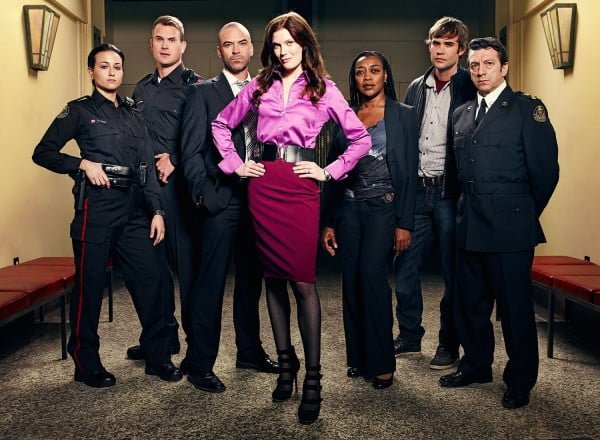 The cast of King