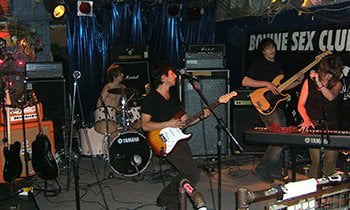 It’s hard not to be jaded going into my 10th year of covering North by Northeast (NXNE) stuff – every year it seems to be the same shit, different venue. And since you never really know what you’re truly getting despite reading a band’s bio, you bank on your own instincts.

This year, my instincts paid off – for the most part.

Thursday night, I arrive at the Boat on Augusta to a lineup waiting to get an earful of Vancity’s Mother Mother quirky gloomy surfer rock. Failing that, I finally get into see Les Breastfeeders, an awesome garage pop-band out of Montreal. While lead singer Sunny’s English is not up to par, he managed to shout out to the crowd, “Don’t mind the accent â€“ all I want to do is boogaloo.” Not tolerating any of the usual T.O. zombie swaying side-to-side, the five-piece outfit demands that all the bloggers and shutterbugs step aside and let the boys and girls dance up a storm. The horde concurs, ending off in a sweaty “Merci” to our Francophone friends.

Next up, Pride Tiger a.k.a. Thin Lizzy revival fails to stand out for me (I’m more interested in finding out whether that is, in fact, Busy Ramone from ’90s TV show, Ready or Not, standing in front of me – I’m pretty sure it’s not) and I take off to see A Northern Chorus at Sneaky Dee’s. Preceded by The Ghost is Dancing, which resembles the poor man’s Broken Social Scene, A Northern Chorus’ ambient somberness seems to wind down the evening. Good nighttime music.

On Friday, the evening begins with OK City OK at Holy Joes. I made the mistake of assuming that they would sound like Boredoms or Zoobombs, crazy fun Japanese bands. The playing itself isn’t too bad and at times, the bass and drum beats were overpowering, but what ruins it for me is the lead singer, who looks and acts like a creepy Kevin Spacey. He sings in English and all of a sudden it sounds like the Dave Matthews Band.

Thankfully, to get that bad taste out of my mouth, the Vulcan Dub Squad is there to entertain with their set of prog rock. You can tell that despite the showmanship of lead singer Ranbir Gundu, the five guys are truly nerds at heart, but pull it off real smooth. Who else would talk about Star Trek as if it were art? At previous shows, I’ve seen them sport gas ventilation masks, but now they’ve gotten into the habit of climbing onto amps and playing from there. Equally great for a live act.

Trucking over to the Bovine Sex Club at midnight, I’m just in time for Modern Girls Modern Boys, a foursome out of Toronto. I can’t help but be smitten by keyboardist and singer Aimee Mazzuca when she starts shaking her tambourine from one song leading into another. There’s something very Chrissie Hynde about her even though the music sounds more along the lines of the Yeah Yeah Yeahs. What I notice most of all, though, between all the foot stomping and toe tapping, is how tight their songs are. They seem to always end at the right moment. I’d definitely see them again.

Last stop: moseying to the Legendary Horseshoe Tavern for White Cowbell Oklahoma. These guys already turned the packed room into Deliverance by 1:30 a.m. The gang of hillbilly rockers play a song called, “Put the South in Your Mouth” and how appropriate that Elizabeth, their southern belle intact with double-Ds, shook ’em till the cows came home while serving the cowpokes booze. Classic.

Okay, so maybe there is some redemption for NXNE after all â€“ you just gotta follow your nose. But I can almost guarantee I will go through the same motions again next year.