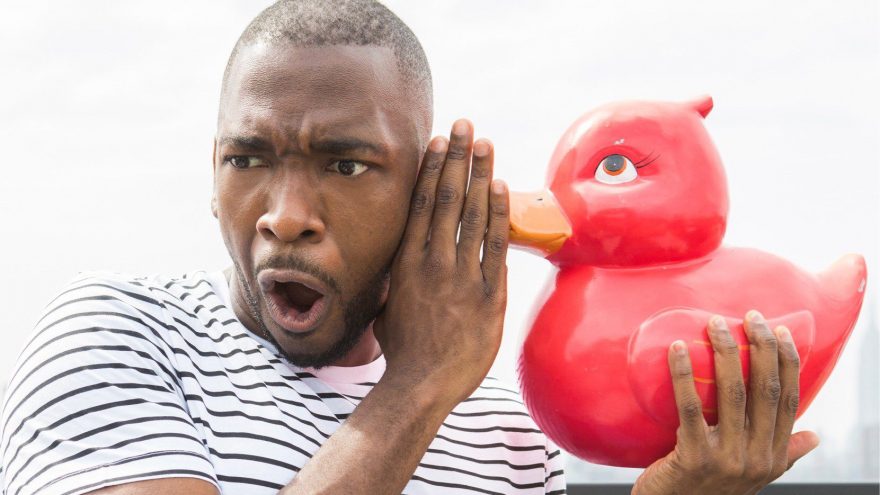 Jay Pharoah is hilarious, he has a plan, and he’s coming to Toronto for JFL42.

Pharoah had his big start on SNL, and made a name for himself with his incredible impressions of President Barack Obama, Jay Z, and Denzel Washington. Since then, he’s headlined comedy shows across the U.S. and Canada, and worked on series like Family Guy, Bojack Horseman, Robot Chicken, and the new series, SuperMansion.

Read the interview below for what he has to say about his shows, his dreams in the Marvel Cinematic Universe, and some projects that are in the works.

What are you planning for your JFL42 show? How do you plan a show?

“You gotta know your environment first. I know I’m in Toronto, so there’s definitely going to be a couple of Canadian and Toronto digs. Besides that, I don’t really have to switch up my material that much, depending on where I’m going.”

“Wherever I’m going, I know what to do, I know where I’m going, and I know how to put on a great show. Full confidence. I know how to have fun and I’m ready to go out there and make people forget about their problems for an hour and a half.”

“I mean I got points–you always have your points written down–but there’s always room for having fun with the crowd. Anything could happen in the building. Somebody could trip, fall out of a chair, somebody’s heel could break, your girlfriend could walk out on you. Anything can happen, so when those moments happen, I’ve always got a few in the chamber, ready. I know how to improv, so I’ll just go off and talk about it. But I’ll always make sure I get back to the central point of my show. Like nothing ever happened.”

Do you love being on stage more than anything else? Beyond movies or working on television?

“I prefer everything. Work is sexy, you know what I mean? I’m workin’. I get to work!? I get to work and do what I love. It doesn’t matter, it’s all a love for me. It’s performing and entertaining folks. All my kids are talented. [laughs]”

“Thanks, man. It’s a blessing and a curse. When people are really taken by a talent that you have… say you’re a singer. If I went to a Prince show, I wouldn’t want him to rap, but if he had some bars after he sang ‘Purple Rain’, I wouldn’t care. I’d be like, ‘You know what? That’s dope.’ Prince is evolving.”

“Anyway, back to your question. How much of it plays in my shows now? They’re just the sprinkles–they’re not the central focus. I don’t need the impressions, but I know that people are coming to my shows and they’re expecting to see them, so I have to. You don’t want to disappoint your babies. You have to make sure that you get those out there.”

What are your goals right now? What do you want to work towards?

“Trying to get into the Marvel Universe, man. The MCU. You know, come on. I saw Black Panther; I got offended. I was like, damn–they ain’t called me? [Laughs] Like, I’m seeing people I ain’t seen for years. I looked in the back, I saw Flavor Flav in the back.”

“Flavor Flav in Black Panther and nobody called me? I’m switching agencies. I don’t like this.”

“Yeah, man. That’s the goal man. Just to get in to Marvel. J.J. from Good Times was in there too. Y’all might not have seen him. He was playin’ the rhinoceros. I know J.J. when I see him.”

“You just see a rhino walking and then you hear ‘Dyn-o-mite!’ you might think about me. Like, ‘Damn, Pharoah was trying to tell me he was in it.'”

“Also to put out a couple of specials within the next two years. I have the material, man. Kind of just stay on that trajectory of being the guy. You know.”

“Look dog, I ain’t trying to toot my own horn here, but I’ma toot my own horn. I’m six foot two, I’ve got muscles. I can twerk my chest and man, I’m a pretty good looking dude. That alone should say Marvel Universe. It says it. You can’t put Chadwick Boseman in every movie–you can’t have that happen. You can’t do that, okay? He can’t do everything.”

“Look, I’m even looking at Anthony Mackie. Anthony Mackie is going to be Captain America. Alright, well who da Falcon? Who’s playing the Falcon? I can play the Falcon. I can imitate a falcon so I know I can play it. I know I’m going to kill the role.”

“Also, I’m working on this movie right now called Spinning Gold, the Casablanca Records biopic. Getting that done. So I’m Cecil Holmes in that movie. That’s Neil Bogart’s right hand man and his best friend. Yeah brother, so finish that movie, get that movie with me and Katt Williams out [#Twominutesoffame]. I got a lot of bullets in the chamber. I’m just trying to shoot at the right thing.”

Now that your career is so busy, do you look back on anything you’ve done in the past and wish you could do something with it again?

“You know, I started a miniseries a long time ago on YouTube called Behind The Actor… if I could resurrect that, that would be dope. I would love to do that, man.”

“And I would also say, some of the characters that I did for SNL; I got a lot of them. I have this list. Just to take all of those and put them on a different platform, let people see them. I would love to see that. D’Wand. I did this character on SNL called D’Wand.”

[In the voice] “Hello, I’m gonna take an early lunch…”

“I want to take him and make a movie.”