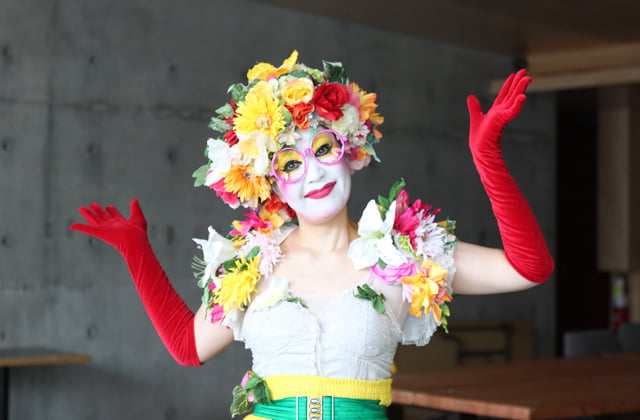 Yanomi is dressed in an eye catching and bright outfit complete with red glasses, face paint and artificial flowers. She stands out even in a room filled with other eccentrically dressed Calgary Fringe Festival performers.

“Miss Hiccup cannot speak because she hiccups too often, like, hiccup, she tries to speak, hiccup, but she cannot but instead of that she sings many songs and also a lot of sound effects in the world,” says Yanomi.

Yanomi grew up in Southern Japan and now lives in Tokyo. English is a second language for her, which is part of why speaking is kept to a minimum. The other reason is that she is good with sounds. As we talk her answers are concise and minimalistic but are punctuated with sound effects like brushing teeth and of course hiccupping that translate poorly in type but says everything her words are leaving out.

“I just really love music and many sounds like including noise. Like I like the sound of brushing teeth so all those sounds come together and I make it,” reflects Yanomi.

Her show has been a favourite with adults and children alike winning Best of Fest at the Winnipeg Fringe, Talk of the Fringe at Vancouver Fringe, and Audience Choice at Frigid New York.

A Day in the Life of Miss Hiccup was at the Calgary Fringe Festival at the Lantern Church Gym.