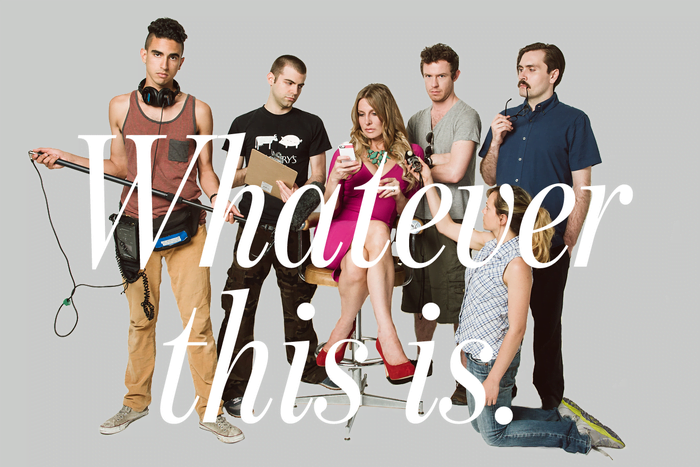 A year and a half ago Adam Goldman and several of his friends began making a web series called The Outs, which followed the aftermath break up of a young gay couple in New York. The show slowly spread and won a huge following. It was realistic, funny and presented the world with real gay characters and believable depictions of 20-somethings. Goldman and co. are now back at work with a new web series called Whatever This Is.

Whatever This Is. takes a different tone than the Outs, which was very specific in following Michael and Jack’s relationship. What This Is. was inspired in part by various production assistant jobs that Jay Gillespie, who has worked on editing and cinematography for both projects, had done.

“He mentioned that he thought it would make a good premise for a show and he told me a story about how he had to babysit a dog all day on set, which is something that happens to one of our characters in the pilot episode,” says Goldman. “I just sort of started bouncing that idea around in my head and I thought who are these guys and who is this girl who lives with them and it all started coming together and it made sense.”

The other inspiration was to look at a group of 20-somethings that have largely been ignored by other shows treating the same age group: those living month to month with no support from their parents or financial lifeline. Each episode the three main characters struggle to pull together enough money to pay the rent.

“There was something here that hadn’t been explored about this moment in your life when you’re been told to work for pennies but that it will someday turn into a career,” says Goldman. “For these characters it’s that they really need the money and they need to be making a living and that’s hard so yeah we wanted to explore that because I can’t think of another place that we’re seeing that right now and I think it’s really important.”

“The Outs is so specific and Whatever This Is. casts a bit of a wider net just in the sense that you’ve got Sam and Lisa who are sort of the central straight couple of the show and they’re working through some stuff being in a relationship for several years,” says Goldman, “then you’ve got Ari who’s gay and very burned out on the dating scene and he’s sort of figuring out whether this is the moment in his life to just focus on his career.”

Every episode follows the characters to a different production job including a music video set, a Real Housewives set and an America’s Next Top Model style show. Goldman said he was willing to be a lot more adventurous in the settings that Whatever This Is. goes to whereas the Outs was mostly done in apartments.

“In the first episode when they go to Donna’s apartment, her palatial apartment, that’s a real apartment in New York on the Upper East Side that we went to that’s just vast and gorgeous,” says Goldman. “On The Outs we never would’ve shot there because knowing our own restrictions and our production limits I never would’ve written that scene.”

Whatever This Is. includes several of the people behind The Outs including Sasha Winters who played Oona, Hunter Canning who played Jack and Tommy Heleringer who played Scruffy as well as Gillespie. Goldman compares them to a theatre troupe with The Outs and Whatever This Is. being things created by a particular group of people working together.

“The intention of the show from the get go was can we keep this group of people together,” says Goldman. “As a writer I love going to these performers and saying what do you want to work on, like what is an interesting thing for you right now, what do you want to explore and then I get to sort of take that and channel it into the show.”

Whatever This Is. also brings in new faces that Goldman met through the New York acting community. Dylan Marron who plays Ari caught Goldman’s attention while performing in a play about 18 months ago and then moved in a few blocks away from the apartment that Goldman and Winters share.

“Inevitably he moved in several blocks from me and I see him all the time,” remarks Goldman, “but I mean Dylan’s just an incredible performer.”

Ross Hammond who has previously done a lot of Shakespeare plays the “curmudgeonly” boss Oscar. Hammond’s mustache provides much of the inspiration for the character.

“I basically wrote the part around that mustache. I was like that is a ridiculous piece of facial hair let’s see what happens with that if your whole personality grew out of that mustache,” replies Goldman. “He gets to play someone who is under a lot of pressure to get things right and has to rely on other people for that and that’s a really stressful position to be in.”

Goldman studied acting and directing at Bard College (where he met Winters). Despite playing Mitchell in the Outs he prefers directing and will only appear in a small role in Whatever This Is.

“It was never my intention to be in The Outs it just sort of happened,” says Goldman. “The Outs would have been a better show if I had not been on it because I was allowed to cheat and only write myself stuff that I’m capable of so there’s not a moment when Mitchell like runs screaming into the streets and tears his clothes and like has an emotional breakdown because I wouldn’t be very good at that and so if there was another actor in the role who I could write that for I probably would have so it’s a matter of taking myself out of the equation.”

The Outs was crowdfunded via Kickstarter through two campaigns that raised a total of $24,024. The first asked for $1,000 and raised $1,685 in late March and early April of 2012. A second one raised $22,339 with an original goal of $8,000 to finish the show. Due to the fundraising success a seventh episode was made on top of the originally planned six.

For Whatever This Is. Goldman opted to use Kickstarter again and managed to raised $171,446 with an original goal of $165,000 (though donations came down to the wire to attain the goal) to shoot the six episodes of Whatever This Is. that will make up the first season.

“[We’re producing] three hours of television, six half hour episodes but by television standards that’s nothing. I mean your average sitcom costs about $1.7 million per episode and we’re asking for $165,000 for six episodes,” remarks Goldman. “Whatever This Is. is the work of 40–45 people and we’re really doubling down and trying to focus on it so that we can deliver it in a shorter time than The Outs, which took about a year.”

Part of why The Outs took so long was that everybody was working day jobs. For example Hunter Canning who played Jack was working on the Broadway production of Warhorse and was only available on Mondays, his day off.

“The Outs really grew. The first episode is 12 minutes and the last episode is about 45 minutes,” reflects Goldman. “Really no one is getting rich off of Whatever This Is.. It’s just about making sure that people aren’t working for free because nobody should do that and artists count as people too.”

One of the benefits of crowdfunding is the independence that it gives creators like Goldman. He says that he loves discussing his ideas with people but that Hollywood timelines can be slow. With Whatever This Is. they get to shoot and release their stuff on a much faster timeline.

“It was just like I need something to work on and these people are all waiting for something to do,” says Goldman. “It was just incredibly efficient. You know I wrote the show in April and May, the fact that we’re doing it in July is kind of, you don’t get that kind of turnaround if you do it in Hollywood.”

This independence does come with risk. Hollywood and network funding models have the money up front, and there is a lot more of it than crowdfunding can produce. The Whatever This Is. campaign came down to last minute donations and social media bursts before surpassing its goal.

“There is a comfort to doing things the traditional way because the money is there up front and this way it’s a little bit spookier,” observes Goldman. “I consider everything, nothing is off the table. I would love to make a traditional television show and I hope that that happens. I think it’s just for now you know my brain can only spin so many places at once and I’m pretty focused on this at the moment.”

The other benefit of crowdfunding and webisodes is that creators and actors get to build a loyal following and interact with their audience.

“It’s risky but I think that it’s a cool way for artists to interact with their audiences,” says Goldman. “Crowdfunding is obviously still finding its feet and it’s sort of clawing its way towards legitimacy and part of the experiment for us has been having that conversation with our audience and saying look we’re being perfectly honest with, you we’re making good content and that costs money.”

The second episode of Whatever This Is. will be out on September 10, 2013.