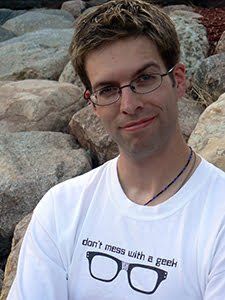 Shawn Bakken made a name for himself on a little TV show called Beauty and the Geek, but he’s about to move into the actor’s realm with the latest film from Toronto independent director Jessica Hudson, DJLP. I chatted with Shawn about his appearance on reality television, what he learned from it, and where he’s headed now.

[Toronto fans can meet Shawn and Jessica, along with the rest of the cast of DJLP, this Saturday, July 7th at 9:30 PM when Drop Dead Roses, Jessica’s first film, runs at the Bloor Cinema (Bathurst and Bloor). Admission is $8 and money raised will go toward filming costs for DJLP, a film about a fresh nighttime DJ at a dysfunctional radio station who suddenly becomes the hottest voice on the dial.]

W. Andrew Powell: How did you get involved in Beauty and the Geek and what made you want to be on the show?
Shawn Bakken: “Beauty and the Geek basically fell into my lap. I was working at the Mensa booth at the Minnesota State Fair back in 2004 with a guy named Paul Jensen. He’d heard about a casting notice for a “smart person reality game show,” where the guys had to be within a certain age range, smart and single. That was all it said. After working with me for a couple hours, Paul decided that I might be a good candidate, so he contacted the casting agency and suggested that they give me a call. Consequently, I got home from work a few days later and there was a message on the answering machine asking if I wanted to come in for an interview.”

“I decided to take a little extra time the next day to go to the agency’s office and sit in front of a camera answering questions for about an hour. When I left, I figured nothing would come of it, but I got an e-mail a few days later asking me to make a video tape to say why I should be on the show. I spent an afternoon putting one together, sent them the tape and didn’t expect to hear back, but after a week or two, an envelope arrived in the mail with a questionnaire. Each time I sent something back, I thought that would be the end of it. Thankfully, they kept responding and I eventually ended up inside the mansion.”

“As for my motivation for being on the show, I think it just sounded like it could be a lot of fun, but I double-checked the “reality” aspect of the show for safety – I’ve watched a few episodes of Survivor and Fear Factor, I’ve seen what some of those people have had to do. While talking to one of the people at the production company, I made sure I wouldn’t have to eat live insects or get beat up by people whose biceps were bigger than my head. Once that was cleared up, it definitely sounded like fun.”

Andrew: What would you say about the show’s “social experiment”?
Shawn: “Well, it definitely wasn’t a dating show – most of the guys can confirm that – but I think ‘social experiment’ makes sense from my point of view. Being pressed into close quarters with a group of attractive girls who I’d never have the guts to talk to in public changed my perspective a lot. I couldn’t spend all my time hiding in the bathroom there, so I had to interact with all of them and slowly came to realize that while we’ll probably never hang out with the same groups of people together, we’re not from completely opposite sides of the planet, either.”

Andrew: Since the show, how has your life changed?
Shawn: “Not much has changed aside from all the teenage stalkers.”

“Okay, so maybe that’s not the case. The truth is that I feel a lot more comfortable with myself. I know I’ve got my faults and shortcomings like everyone else, but everyone else has faults and shortcomings just like me. Before being on the show, I might look at some girls as models of near-perfection. Now I know that no one belongs on a pedestal. We’re all just people, we all belong on even ground. That’s not to say I don’t look up to anyone, but admiring someone isn’t the same as being intimidated by someone.”

“Along those same lines, I kind of enjoy how people look up to me. Compared to some people on Beauty and the Geek, my personality wasn’t butchered – I looked like a pretty decent guy. Once in a while, I’ll hear from random folks who say that they were impressed or sometimes inspired by what I did on the show. That blows me away every time. I was just being me and that turned out to mean a whole lot more to someone else.”

“But my favorite part of what I’ve gotten out of being on the show comes from a story I heard from Louis Anderson, a stand-up comic from Minnesota. He talked about a time when he saw a young boy approach someone famous and ask for an autograph. The guy was talking on the phone or doing something he thought was more important, so he blew the kid off. When Louis saw the dejected look on that kid’s face, he swore he’d never do that himself.”

“I try and live by that same guideline: if someone asks for an autograph or a picture, I’ll stop and do it. It might be a little inconvenient if I’m spending time with a friend or talking on the phone, but my friends have come to accept that by now. Besides, that inconvenience can’t compare to the smiles I get to see on the people’s faces. It’s 30 seconds of my time, but meeting someone famousâ€¦ those memories can last a lifetime.”

Andrew: How did you find out about DJLP – was there something that drew you to the film?
Shawn: “Jessica Hudson contacted me directly about DJLP. She had worked with Eddie McGee [from the first season of Big Brother] on Drop Dead Roses and decided that since working with one reality TV show star turned out so well, she’d go out on a limb and try it again.”

“I don’t think there’s a natural transition from your behavior on reality TV to your abilities in the movie industry, although a bunch of people include that experience on their resumes. My resume, on the other hand, includes stuff like being a landscaper and a bookseller. Most of the guys from Beauty and the Geek are like me – we haven’t been pursuing acting careers – but when I heard about DJLP from Jessica, it was like getting that call from the casting agency all over again. My curiosity was piqued, I decided to give it a try and now I’ve been given a role in what should be an excellent movie.”

Andrew: What role do you play in DJLP?
Shawn: “I play the role of Dave, a guy who does the morning show at DJLP. I’ve had the chance to talk to some DJs on the air before and they’re a lot of fun to work with. The way you hear them on the radio is usually how they act away from the microphone, so I think Dave will provide a good amount of humor and energy to the screen.”

“In this case, however, he’s also got a little secret that he keeps hidden from everyone: he’s gay. Regardless of his friends’ personal views about homosexuality, Dave has a heavily religious background and can’t come out of the closet, can’t tell anyone the truth about himself. That internal struggle should make the character a lot more interesting and a lot more challenging to play.”

“Admittedly, the most challenging aspect might be that he does the morning show and I’m not a morning person. ‘Tell the listeners I’ll be on the air around 10:00 or so.'”

Andrew: What comes next for you?
Shawn: “Honestly, I have no idea what’s coming up in the future. I’ve spoken with my grandmother before and she recommended that I make a five-year plan: decide where I want to be in five years and work towards it now. Given that I was going to law school in 2002, this definitely wasn’t in the plan. Being on a reality television show, getting cast in a movie, doing an interview for The Gateâ€¦ none of it. Given that I veered so far away from becoming a lawyer in the last five years, I haven’t the slightest idea which direction I might end up going within the next year or two. Maybe I should make a prediction, work towards that and then veer away from it towards something completely different.”

[…] anything that’s severely incriminating. If you’d like to take a look, here’s the link plus the text inside for when the link disappears (which could be in another few […]