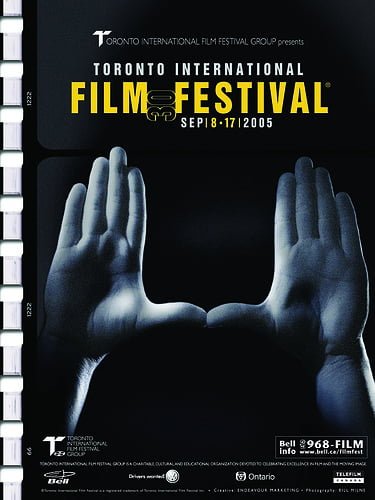 The 2005 Toronto International Film Festival officially kicked off with the opening press conference held in the magnificent Imperial Room at the Fairmont Royal York Hotel (which was a pleasant relief as most press conferences in previous years have been held in woefully small venues making for a very crowded event) – which was appropriate given the fact that the announcements being made and the folks making them were as large and respect-worthy as the venerable old Imperial Room.

Generally there are three major press conference held over the summer to alert and update the media on who and what is going to be at film festival with the first press conference being used to announce a few of the galas. A couple interesting announcements included the premiere of the gay-themed western called Brokeback Mountain starring Heath Ledger and Jake Gyllenhaal and Shopgirl starring Steve Martin which is based on a novel of the same title also by Steve Martin. But the major announcements surrounded a triumvirate of Canadian filmmakers and their films to be featured in major gala presentations. None of them came as any surprise at all but even in that there is something terrific in the fact that the festival contains three Canadian filmmakers with films displaying their skills and talents at the very top of their respective games.

Where The Truth Lies is the new film by Atom Egoyan – a film that has been described as Egoyan’s most accessible film – a film noir thriller that stars actors the likes of Kevin Bacon and Colin Firth. This film contains graphic violence and a lot of nudity – something that you will probably be reading a lot about when it makes its North American debut here. A History of Violence is from David Cronenberg – our most prolific and unique and distinguished filmmaker. This thought-provoking, psychological thriller is based on the graphic novel by John Wagner and Vince Locke. It stars Viggo Mortensen, Maria Bello, Ed Harris and William Hurt. The film made a bit of a splash at Cannes when it was unveiled there in May during the Cannes International Film Festival.

Water is the third in the “elements” trilogy from Toronto filmmaker Deepa Mehta. I had a chance to see a special preview reel of this magnificent looking film during the recent Female Eye Film Festival in which Ms. Mehta was given a lifetime achievement award. The film is lush and rich and tells the story of what happens to young Indian girls who are involved in arranged marriages only to be rejected by their intended husbands. The filming was interrupted when the Indian government took exception to the subject matter and shut the film down and created a loud and damaging public campaign against the film ever being finished. Deepa Mehta stuck to her guns and finished the film about a year after being shut down in new locations in Sri Lanka.

What was a pleasant surprise during this press conference was having CEO Piers Handling and festival boss Noah Cowan announcing that all three filmmakers were there and would say a few words. Egoyan, Cronenberg and Mehta took the stage. Egoyan was humble and spoke mostly of his pride at sharing the stage with Deepa Mehta and how much he was looking forward to her film. Cronenberg, now in his early sixties, was looking fit and energetic as he described his delight at having the film here – “I’m from here and the film was shot here – so I am really thrilled that it will have it’s North American debut here,” said Cronenberg. “Sure it was at Cannes – but Cannes is just, you know, fun – we take the film there and we play for a few days, but everyone knows that Toronto is the real film festival,” remarked Cronenberg to a thundering round of applause from the couple hundred press and festival guests gathered in the Imperial Room. Mehta quietly spoke of how hard her film was to get made and how thrilled she was that it would be shown in such grand fashion in her home town.

On the corporate side of things – it was announced that a huge new sponsor had come on board to support the festival – Diet Pepsi. This film festival of ours just keeps getting bigger and bigger and better and better with each passing edition.

Stay tuned for The GATE’s next TIFF update due after the second press conference scheduled for the end of July.