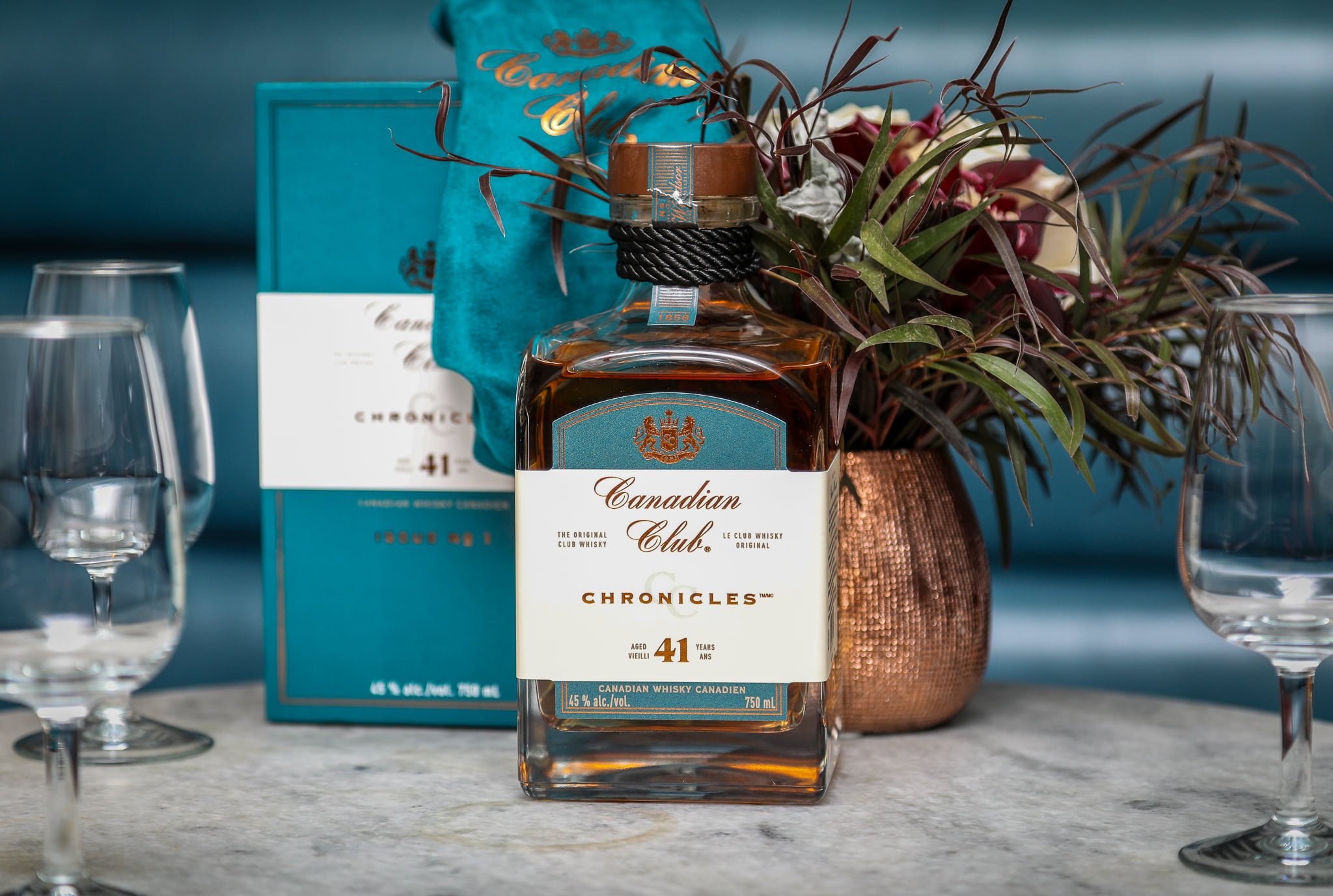 Getting introduced to Canadian Club Chronicles 41 Year Old whisky was a bit like meeting a celebrity.

By invitation, I arrived at Leña Restaurant, and checked in. I waited on the sidelines for my time with the star, and before long, I was whisked over to a private table where I met the special guest.

This star was glammed up for the night, and of course had an entourage too. Joinging the whisky were Canadian Club Global Brand Ambassador Tish Harcus, to help make introductions, as well as whisky man Jim Murray, who just named Canadian Club 41 Year Old the Canadian Whisky of the Year in his Whisky Bible.

What’s remarkable about the 41 Year Old is that there were no specific plans for the whisky when it was barrelled in 1977.  After the liquid was barreled, the master blender of the time passed away, and there were no notes about exactly what was in the barrel either. It wasn’t until recently that Tish Harcus took a sample of the whisky and discovered exactly what they had.

“This was certainly a nice surprise for everybody,” Harcus said to me. “And it had the beautiful colour… the wood has worked it’s magic with this liquid.”

For Murray, the whisky immediately stood out. “I tasted this about two-thirds of the way into writing the 2019 Whisky Bible,” Murray said, “and last year I tasted 1,264 new whiskies.”

“The moment I tasted it I thought, ‘Wow’ and it was so good that what I did, I knew I had to taste it on another day as well. So I put it away for a couple of days… and then tasted it again, and I got the same result. It just blew me away because it’s just so, so sensual.”

“Some whiskies just come steaming at you. Whack. Well, this doesn’t do that. It’s a caress. Every single thing, from the nose, into everything, it just caresses. It just won me over,” he said.

“Just because they’re old, doesn’t mean to say that they’re going to be good, but this one really was.”

Murray also admitted that it’s rare to find a whisky of this age from Canada, since there aren’t many distilleries that have the history.

CC Chronicles is a new series of premium expressions that began last year with the release of Canadian Club’s 40-year-old whisky. While I didn’t sample last year’s whisky, it’s hard to imagine a whisky that can top this year’s 41 Year Old.

The whisky is distilled down to 45%, and it is a gorgeous, smooth, silky, and as Murray himself said, “sensual” whisky. While the whisky is smooth, though, it’s also a little spicy, sweet, and ultimately very rich.

On the nose, the whisky has an aroma of sweet spice, creamy caramel, and a small hint of sugary orange zest. The whisky also offers hints of cognac, rye, and sherry.

Canadian Club 41 Year Old is, to date, the brand’s oldest aged expression they have ever released. It’s a luxurious Canadian whisky that comes perfectly just before the holiday season. As a gift or a treat for your family and friends, it’s an incredibly unique whisky that deserves the full red carpet, velvet rope treatment when you bring it home.

Canadian Club 41 Year Old is available as a very limited release across Canada, and retails for approximately $299.