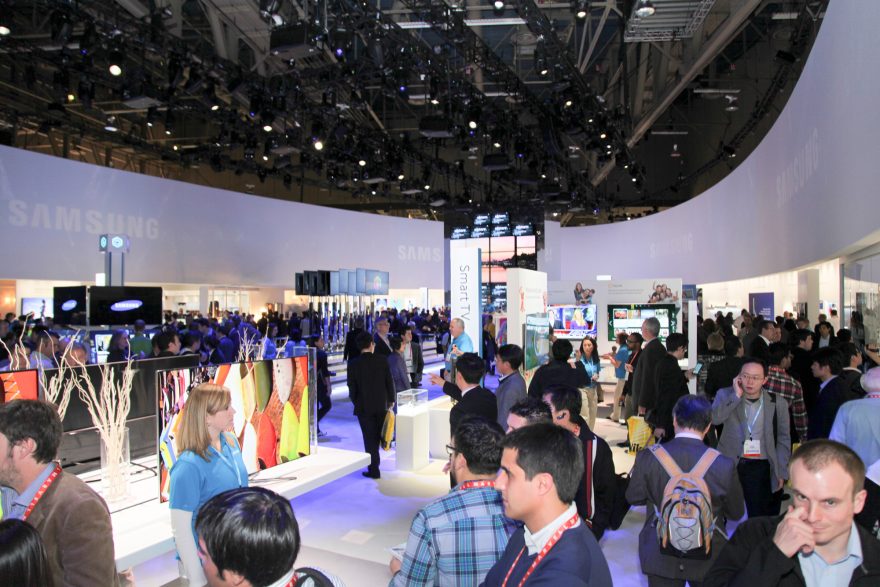 This year’s CES in Las Vegas was packed, as usual, with some majorly inventive technology that will leave gadget fanatics dreaming of the day these products hit the shelves, but few companies had as impressive a showing as Samsung.

As I mentioned in my blog post from the event, Samsung’s booth tour was almost a marathon adventure as I took a full tour of everything that the company is working to launch throughout 2013, including televisions, cameras, audio equipment, laptops, and phones.

While this is in no way a complete guide to everything Samsung debuted at CES, I wanted to touch on a few of my absolute favorite things that they had to show off, and I’ll be excited to test them out as they arrive later this year.

TELEVISIONS
CES is always a big place to launch the latest and greatest televisions, and this year was no different. While LG, Sony, and Panasonic all had new smart televisions on display, Samsung had some slightly cooler new gear that was a step above the rest, including their 4K ultra HDTVs.

Putting even more power into their intelligent TVs, the latest generation of Samsung smart televisions are just plain sharper, and crisper and bigger than anything we’ve seen before. The range of screen sizes went from 60 and 65, to 75, 85, 95 and 110 inches. While there is no official word on the cost for these televisions yet, you can bet they will be well out of range for most households. That just means, however, that prices should come down on this size of ultra resolution televisions in the next 5-7 years.

The best part of Samsung’s latest offerings, however, isn’t the size or the high definition–it’s the fact that they’re even smarter than before. All the new televisions at CES include the new Smart TV Hub, which helps you find entertainment to watch, lets you interact with it in new ways, and connects you to your favorite social media at the same time. This new hub lets you browse through current live television, on demand content, apps and content like photos and personal videos, plus you social connections.

The Smart TV Hub will also help recommend content for you to watch based on your viewing habits, and you can interact with it using gestures.

Evert major competitor at CES had similar offerings on display, but Samsung’s interface was my favorite, and it signals where the technology is going in the next few years. From what I’ve seen, that direction has obviously been highly influenced by what Microsoft has done with Kinect, but it’s also growing and evolving beyond that as well.

CAMERAS
Samsung debuted a handful of new cameras at CES 2013, but the big announcement was that the NX300 camera is now available with a new lens that can shoot in either 2D or 3D. As mentioned during their press conference, that makes Samsung the first company to offer a consumer 3D camera that uses only a single lens, and after viewing the results, it is impressive.

Admittedly, the technology is not perfect, but for early adopters, the 3D effect from the NX300 is impressive, and no one else seems to be close to offering anything quite as powerful. Checking it out on the show floor, it was kind of mind-blowing to see someone walk in front of the 3D camera, and see them in 3D on the television. Up until now, we’ve been restricted to seeing 3D on pre-recorded shows or films, so it’s a big deal to imagine the 3D experience becoming common-place.

AUDIO
Finally, I was also impressed with some of Samsung’s new offerings in audio products. This is not a category I pay a lot of attention to normally, but with the full tour from Samsung, I did get a good introduction, and the Samsung DA-F60 Portable Wireless Bluetooth Speaker is a thing of wonder.

Like a lot of tech at CES, the wireless speaker features NFC for quick synching with your phone, and it can connect to a range of devices, including your Bluetooth-enabled television. It also features 20 Watts of total power, which isn’t bad for device that is not much bigger than a mid-sized paperback.

The most drool-worthy device on display though was Samsung’s gorgeous DA-E750 2.1 Channel 100-Watt Dual Audio Dock with built-in subwoofer. This is audio candy at its best, featuring a built-in vacuum tube amp to give music and audio richer, warmer sound. Make no mistake, this is a high-end piece of audio, so the price tag is not in most budgets, but if you’re looking for that one stunning piece of audio technology to impress your ears, or your friends with, this is it.