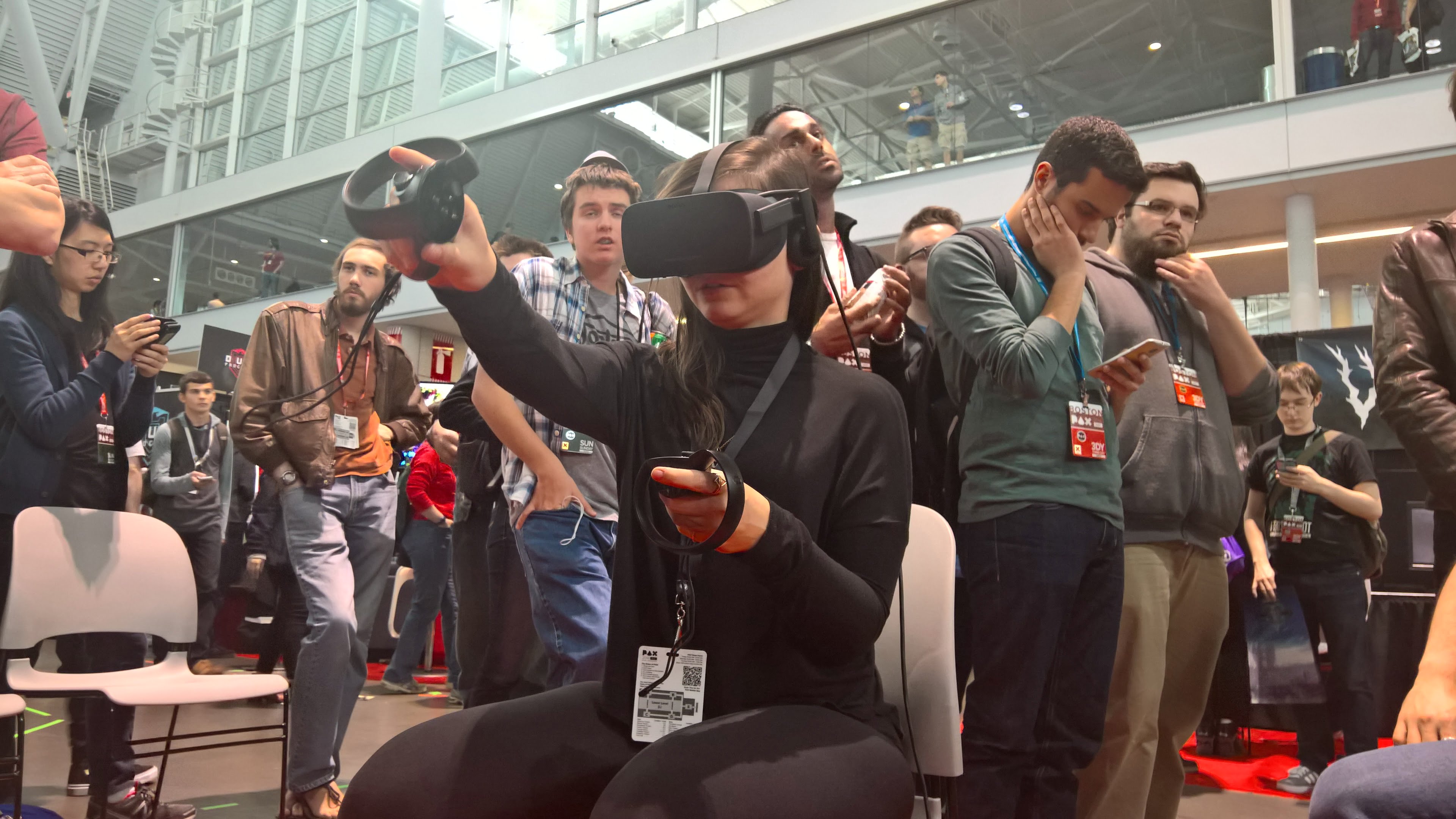 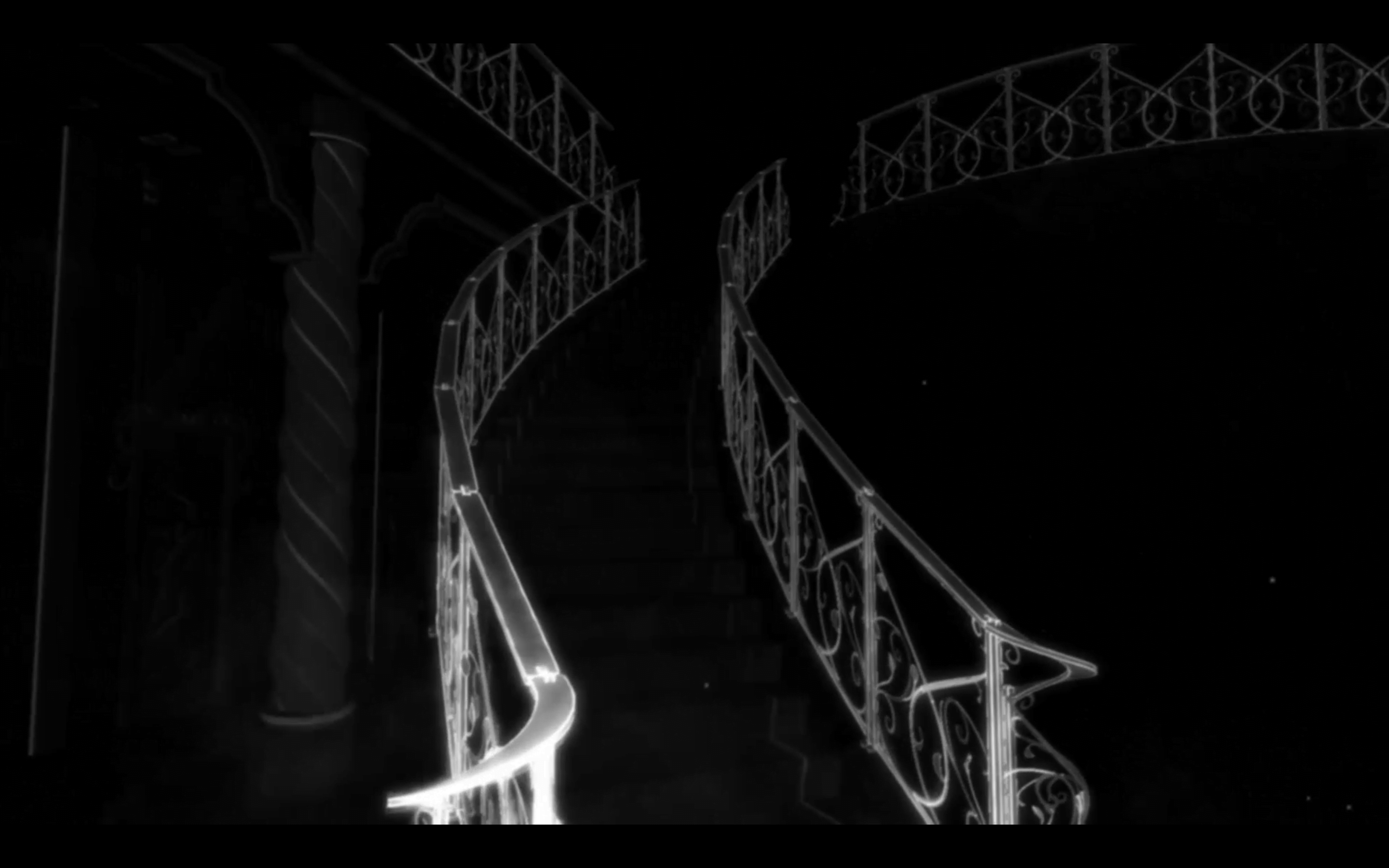 Climbing this VR staircase in 'Blind' wreaked havoc on my inner ear! 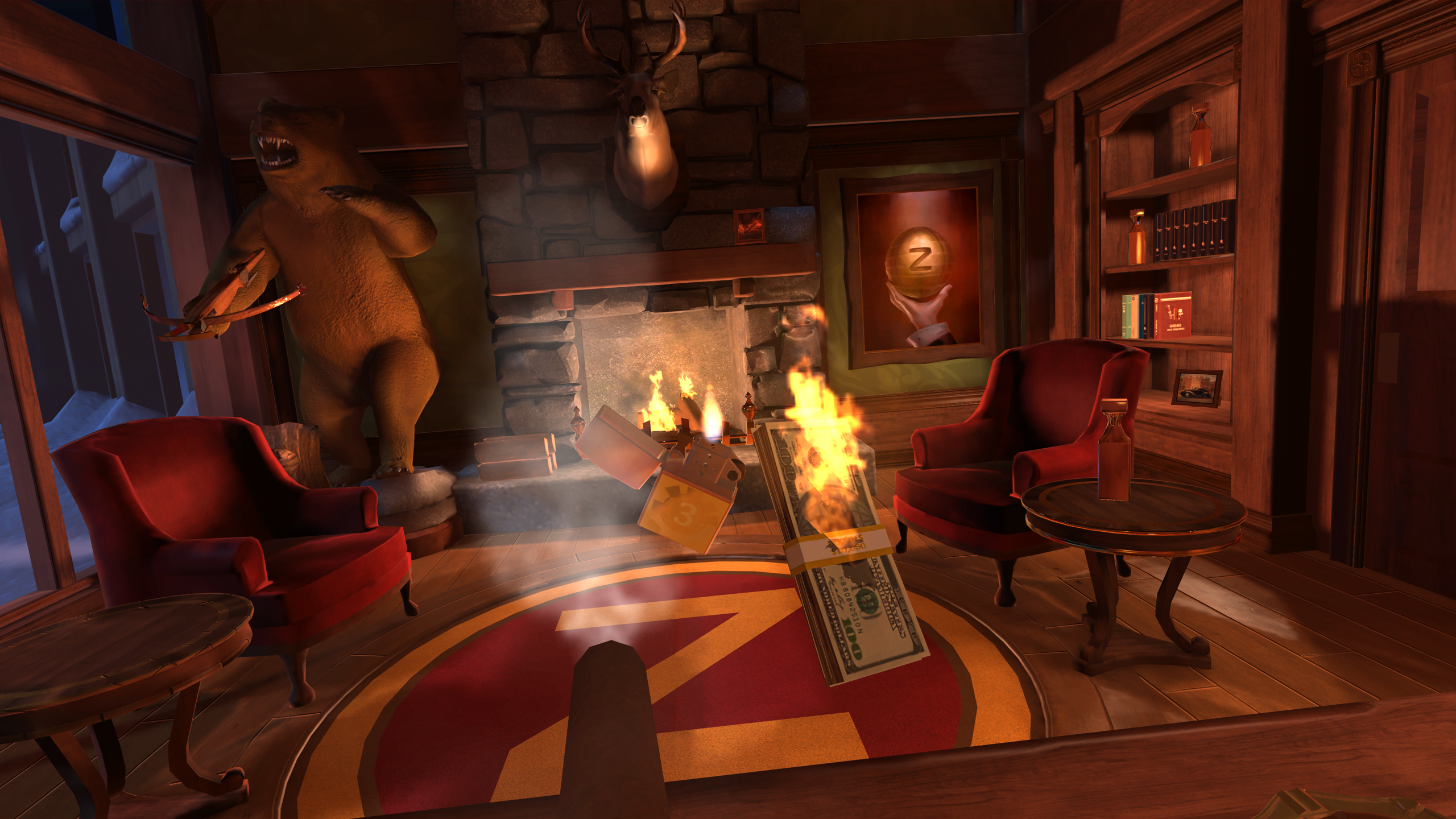 Yes, you can set things on fire, including money, in 'I Expect You to Die' 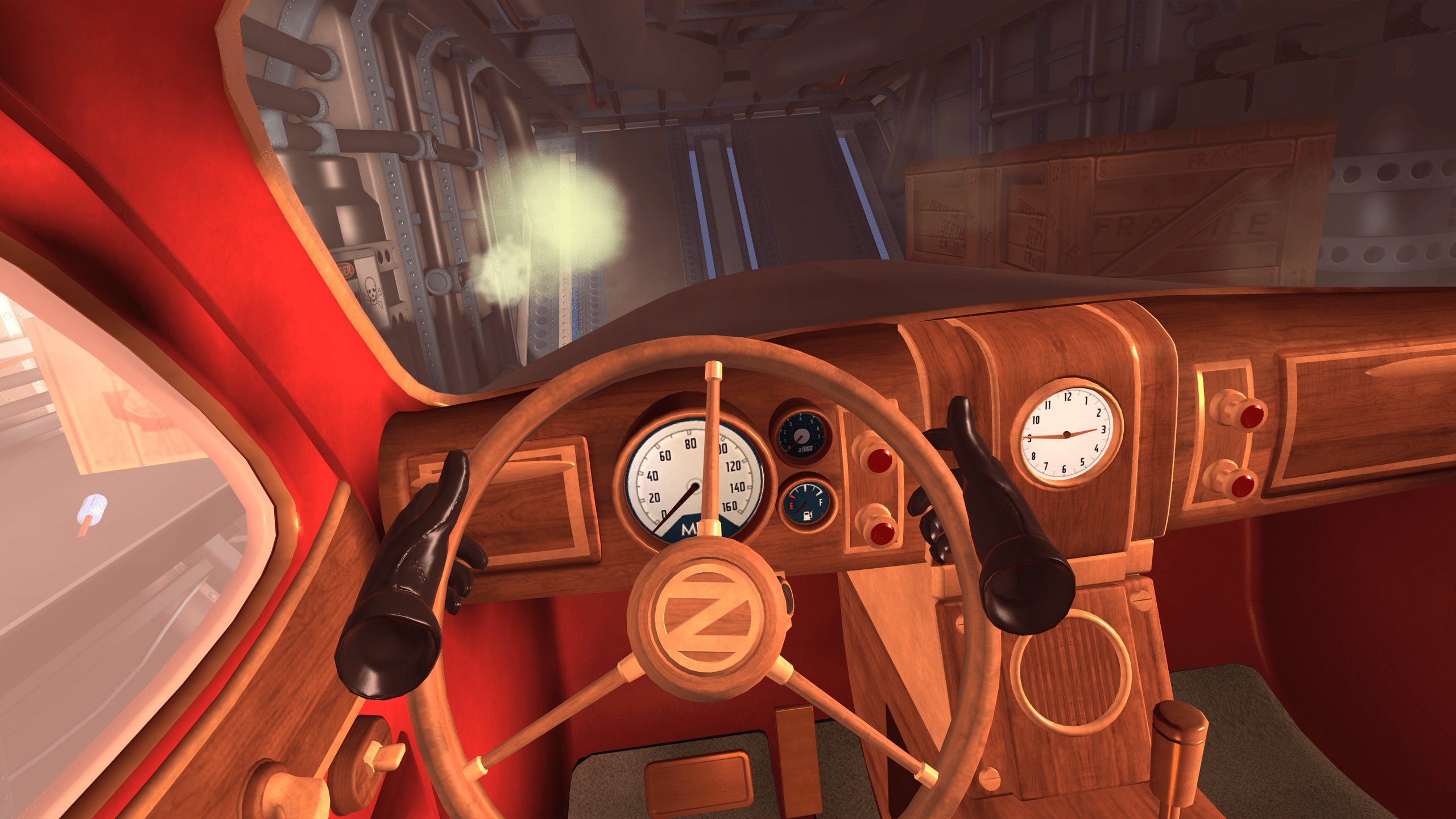 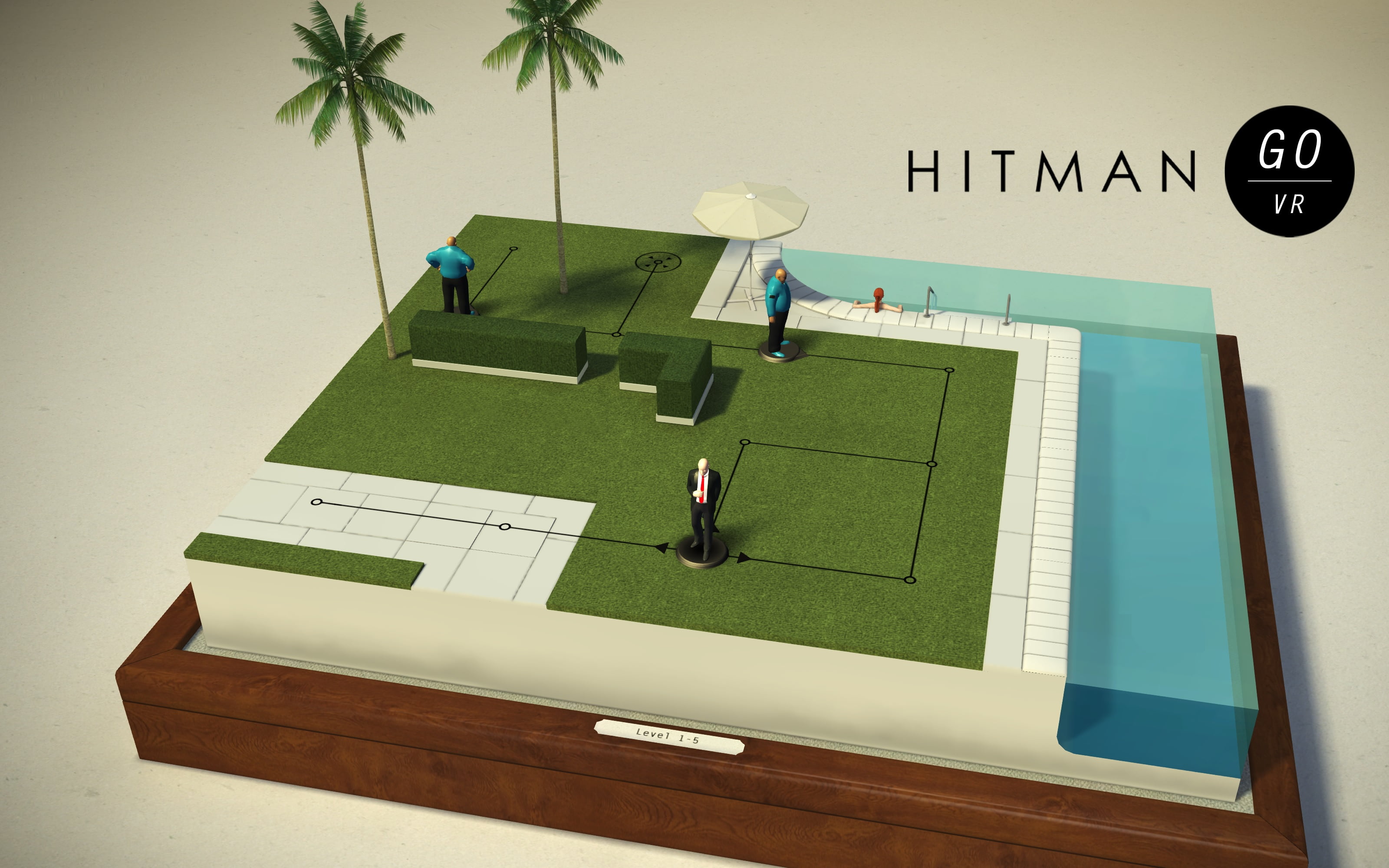 Hitman GO, simple as is it, is made all the more engrossing with 3D and a sense of presence 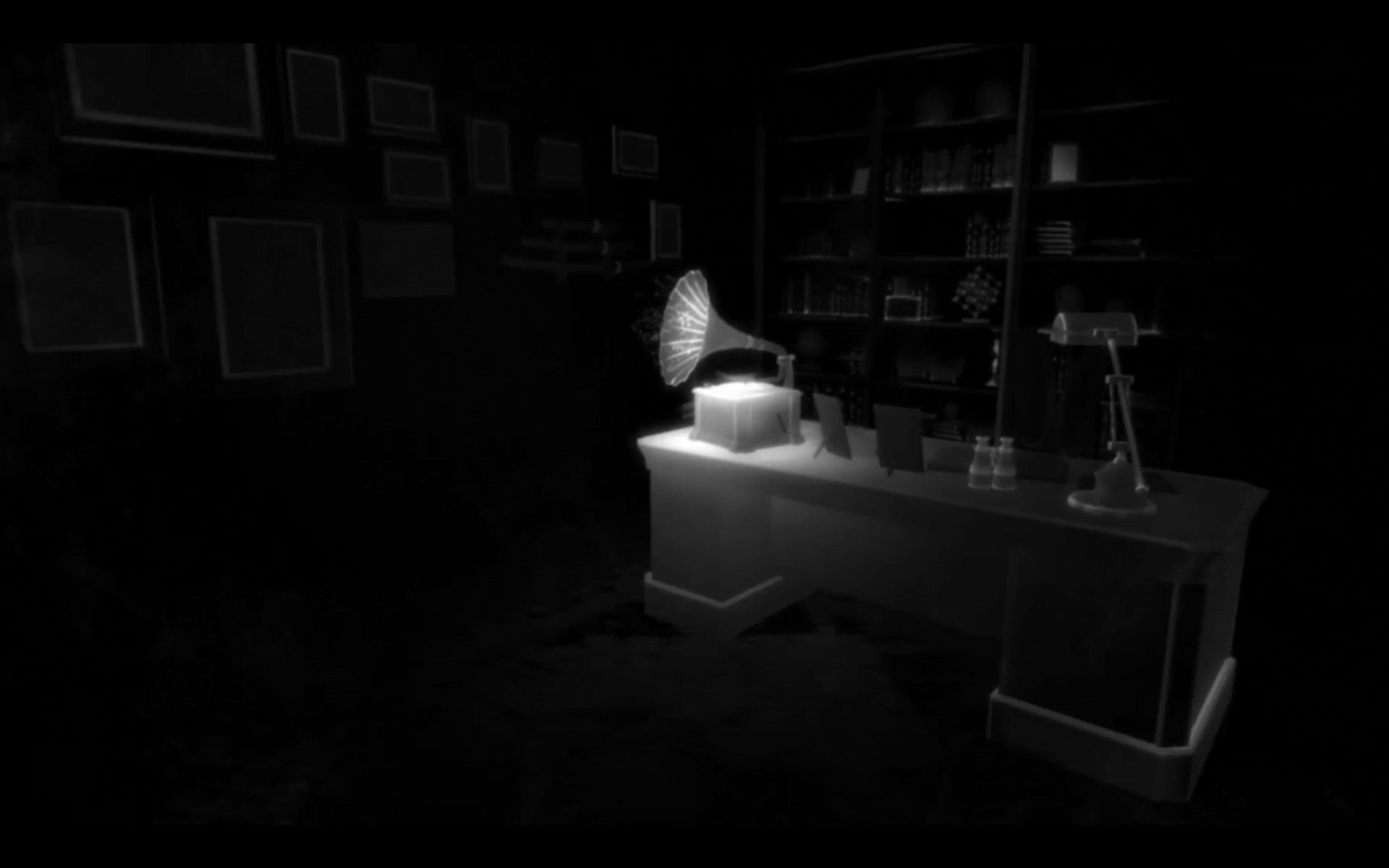 A few of the puzzles in 'Blind' relied upon sound 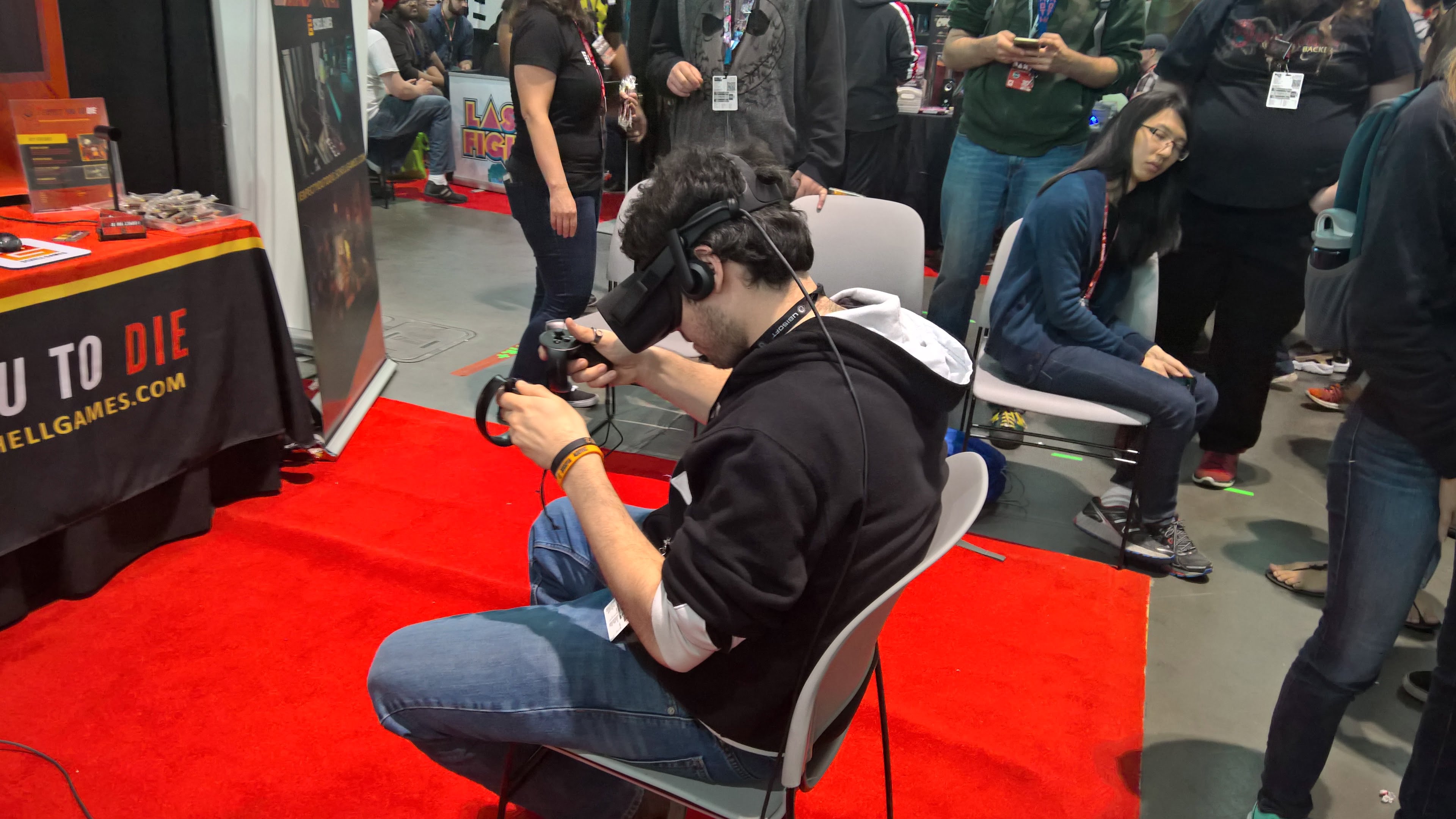 You will never not look silly playing VR. This man is reading an in-game instructional card

The Oculus Rift recently saw its big retail release at Best Buy, Amazon, and Microsoft Store shelves. A virtual reality headset that began as a Kickstarter campaign, the company was ultimately acquired by Facebook to the tune of 2 billion dollars, leading up to it’s impending limited-retail release.  There are still many people who preordered the device back in January with an expected release back in March, who are still awaiting their headsets, with their estimated ship dates having slipped to as late as August. This puts a big question mark over the viability of VR.

The timing of this is convenient, as I recently had my first VR experiences at the Penny Arcade Expo, a large gaming convention started by the long-running webcomic Penny Arcade. Host to companies as large as Microsoft and Sony, and as small as indie developers with a staff of 1, this was my third PAX East, and my first as press.

I started my VR adventures with an exploration/puzzle game called Blind, from Italian game developer Tiny Bull Studios. The overarching conceit is that you awake in a house, unsure of how you arrived there, and unable to see. You navigate by clicking your cane to create silhouettes, basically a videogame echolocation. For my first foray into VR gaming, and the isolating effect of the headset and headphones certainly heightened the experience.

The game uses a somewhat unconventional control scheme for movement, clicking the left and right triggers to turn, reserving the left thumbstick only for forward & backwards movement. This helps to minimize disorientation and nausea, an issue that has not been entirely resolved with VR.

I found it to be a nice, gentle introduction to the format. The game itself was a well-designed, and one I could see myself playing more come release.

One music-based puzzle benefited greatly from my presence within the VR game world. I needed to hear a song that was playing “behind” me more clearly. The positional audio and sense of “place” within Blind‘s world allowed me to simply tilt my head slightly to the right and back, so I could clearly hear the tune, the same way I would if I were straining to hear music playing on a distant speaker somewhere. It was my natural inclination to get physical within VR games, which makes them stand out from traditional gaming experiences.

The other takeaway from Blind was one point where I wandered, within the game, up a flight of stairs, and for a moment my brain wasn’t sure what to do with this visual input. I wouldn’t say I got dizzy, exactly, but you know that sensation you get in your stomach, when you look off a third floor balcony? I felt that, minus the fear of falling.

Square Enix had Hitman Go: VR set up in their booth, from their Canadian studio Square Enix Montréal. It is an Oculus-enabled version of their popular mobile game Hitman Go. Presented as a tabletop board game, you move your character, Agent 47, one space at a time, while the enemies and targets move on alternating turns. Your objective is to reach the end of a level, or take out your target, without getting killed.

In speaking with the developer, they tried many approaches to VR for the game, from stark emptiness to photorealistic rooms, but ultimately found the best solution was a simple one–a space of white and grid lines, to provide you with a sense of place, without distracting you from the focus. The 3D aspect of VR allows you to physically get closer to the game board, peer in and around it, and the effect of looking at a “real” object was captivating. I spent minutes gawking at the little houses and fences and trees, each time I went to a new stage. One chapter of the game, taking place at night, changed the surrounding world to include twinkling stars above my head.

My highlight of the show was a game I played early on the first day, and I spoke so highly of it the rest of the weekend I was able to convince two friends to wait in line over two hours to try it. I Expect You To Die is on track for release later this year by Schell Games. You are cast as a 60’s-style secret agent, in a world full of deathtraps and doomsday devices. The levels put you in a stationary position, trying to save yourself, or the world. Also, you have telekinetic powers. The first mission finds you in the driver’s seat of a car, in the cargo hold of an airplane already in-flight. You need to start the car, and drive out of the plane to escape, and complete the level.

It really is difficult to describe just what makes this game so special without gesticulating wildly. You’re able to look all around you to find possible answers.

In the back seat of the car is a large revolver. Because the game uses the motion-tracking Oculus Touch controllers, you simply reach back there and pick it up. One friend tested the gun out, and shot out the window of the car. Which allowed the poison gas in the cargo hold to fill the car, killing her. In a small storage compartment, another friend found a cigar and lighter, and ignited the cigar before “putting” it in his mouth. The game takes this into account, and now there is a cigar just inside the bottom of your field of view, because that’s where it would be.

Another mission has a hat on a coat rack, an incidental bit of set dressing. My immediate instinct was to put it on, and within the game, I could! With I Expect You To Die, Schell Games has made sure that these small details are working right, so you really do get immersed in it’s world. Once I got the car started, after negotiating an increasingly silly series of traps, I tried to drive it by pressing down on the pedal with my foot. I am not the only person who attempted this. In a game where the only input is clearly made to be your hands and head, we all tried to use our foot because we believed we were in that car.

I’ve seen people be extra careful when putting bombs in their laps, and when my friend dropped a switchblade, he jumped back a little the way you would if you dropped a knife in the kitchen. The last 400-odd words all are meant to say that I Expect You To Die is incredibly fun, and I hope I’ll get to play more of it someday.

That was the big problem with the VR games I played at PAX EAST, and my big takeaway from the show floor. There were many games being demoed with VR functionality, and the ones I played–along with anecdotal stories from friends’ experiences–were all really fun.  I would love to spend more time immersed within them. However, the barrier to entry is simply too high. You’ll need to spend about $1000 on a PC just to get in the door, and another $600 for the Oculus Rift VR headset itself.

This doesn’t take into account the as-yet unreleased Oculus Touch controller, which was vital to the experiences I had. If you don’t already have a powerful gaming PC, you’re looking at $1800 for the games I played, none of which were photorealistic graphical showcases, nor were they trying to be. I really enjoyed I Expect You To Die, I cannot stress that enough, but not for more than the price of my (used) car. This was where the conversation kept turning to, every time we discussed VR. It’s really fun, but not $1800 fun. Especially for a new category of gaming with limited support so far, and no guarantee of games still being developed for it in a year or two.