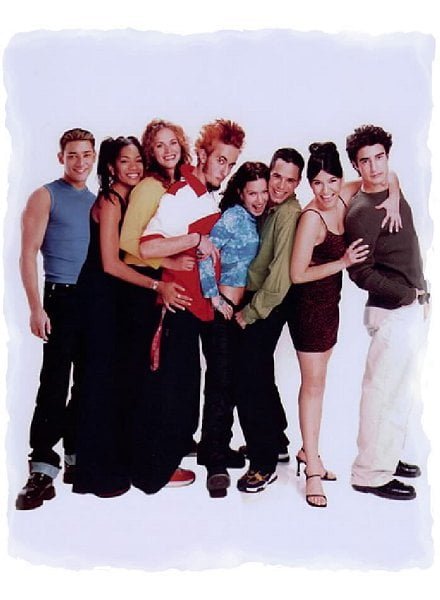 Yes, January 15th at 8:00am the cameras start rolling and the world will get it’s chance to take a look at these 8 people who would/could be stars. Just the other day I got my chance to go down to the Lofter’s home and see what all the fuss was going to be about. I know I shouldn’t be negative since the show hasn’t even premiered yet, but I wasn’t exactly impressed. While this show could be one of the coolest things to come out of Canada in a while, its sincerity could be the best or worst thing about it. If this comes off looking like a bunch of hams in front of the camera I can’t see it lasting long. At the same time it has the advantage of breaking some amazing new ground.

But, not everything was as I hoped in this paradise. In the media room hangout I got my little package for U8TV and it didn’t take me long to find the first thing to worry me. Three sheets of pictures were slipped in with all the info and although they were good photos they are also the cheesiest, most over-produced images I have ever seen. The group photo looks like something from Beverly Hills: 90210 or Melrose Place. There’s nothing real about the people in these pictures… they look like a horde of makeup artists, hairdressers and clothiers spent a day on their bodies just to prep for the pictures. And the backgrounds on the individual pictures look like they were done at a stylish studio instead of au naturel.

Although I know they need to promote this show and make it look slick, I am worried that they are already over producing the show. At the same time, there are two outlets for this show and that can’t help but make things different. As a pure internet tv station I think they might have pushed for an edgier look but since they are also aiming for spotlights on the Life Network (a 30 minute show every day -except Sunday at 9:30pm- where they recap the day) I think they had to gloss up the image quite a bit more to satisfy everyone’s needs. They may also have decided at that point to pick some of the “glossier” people who applied though. Each of the people is in shape, fashionable (in their own ways) but not exactly stereotypical. So after a quick intro from the big wigs from Alliance-Atlantis… the new stars stepped out.

First out was Mathieu Chantelois acting like a pomp VJ from MTV, he swaggered in and after introducing himself plopped down into a seat while grinning into every camera possible. Every instinct told me I’d dislike this guy… maybe as a real person he was okay but on camera he was going to be a swaggering annoyance.

Next was Arisa Cox, the only person in the group who wasn’t white. (An almost all white cast possibly makes her a token nod to Canada’s multiculturalism but makes me wonder why the 8 couldn’t be more diverse besides the two French speakers) She was by far one of the more interesting people to listen to, but still seemed to fit all too well into the hip style they seemed to be looking for.

A pleasant surprise was #3, Valery Gagne (Pasionek), a kind of in-your-face cool-chick from Montreal with an attitude that was wicked without being put-on or without being too much of an act. She was the real deal, even if that means being a bit in your face.

Overall, the coolest person on the stage, Kalen Haymen came next. From the start I thought he had a good chance (although early on that wasn’t a comfort to me – see Day # 1) and there he came in all his glory. Carrying incense and his camera he was a breath of fresh air with his dyed hair, kilt and mass of piercings amongst all the other mainstream-looking Lofters.

Jennifer Frances Hedger, one of the most camera friendly faces of the group, was next. She wasn’t exactly what I had hoped to see and lacked the honesty I expected from the Lofters but she seems like the one person to be the most likely to become a star. She has a presence about her that screams stardom, even if it isn’t so much a feeling that reminds me of real, down-to-earth people.

Next, David Keystone came out. His introduction was short, but he was the most real, smart, and likeable person I ever expected on that stage. He was genuine to the point of being like an old friend and yet he seemed like the most reserved person there. A welcome change from a couple of the others.

[Sandy Medeiros was left out of this article by a sheer forgetfulness. This wasn’t done on purpose, but at first I’ll admit I didn’t like her as much. At this point though, after watching part of today, I think she is one of the few trying to talk to people over the net and is actually pretty interesting.]

Lastly came Trevor “Tre” Smith. He was the most outspoken person on stage and also the most pompous of the group. Unlike the others, he was actually chosen as a replacement for one of the original members who decided to drop out because, as Lili Shalev put it, “He doesn’t feel that he can deal with the reality-based part of U8TV and he did not feel comfortable exposing his life on camera to the world.” Unfortunately, that’s probably exactly what U8TV needed more than another guy who was just aching to have a camera on him.

It’s hard not to judge this all yet, since I really only like 3 of the Lofters but that is possibly an interesting edge for the show. U8TV seems to be aimed at providing some real life experience and to get that they’ve generated a bit of possible tension. They’re controlling a few key things to make an environment that will provoke some sort of reaction from the group. Although I had a bad feeling in the pit of my stomach there is a bright side…

When I got home that evening I watched a rough cut of the U8TV Bootcamp video that they had given out. It was a draft of a show that would introduce the people watching the Life Network to the whole process of finding the Lofters and picking the 8 people (I was actually shown on it for a mere 15 frames… yes, I counted). It gave a whole new light to the people on the stage and gave a new promise that this could still be a very cool idea. Almost everyone, even Tre and Mathieu, were interesting and lively. It brought out a side to their personalities that either fear, training or rehearsal had erased from them in that press conference arena.

I’ve learned a lot though. There’s a great chance that this’ll go well but I don’t want to bet on it yet. Until Monday, I’ll leave my opinions to the side and watch it with a clear mind to see how things turn out. Maybe, just maybe… this could be something that won’t suck as bad as Big Brother. From Monday on, it’s not up to the creators to build the image though… only the Lofters can make people love or hate them by being themselves and letting the audience decide if they’re interesting enough to watch for an entire year.