Watch “Rob Ford” in ‘Sharknado 2: The Second One’ 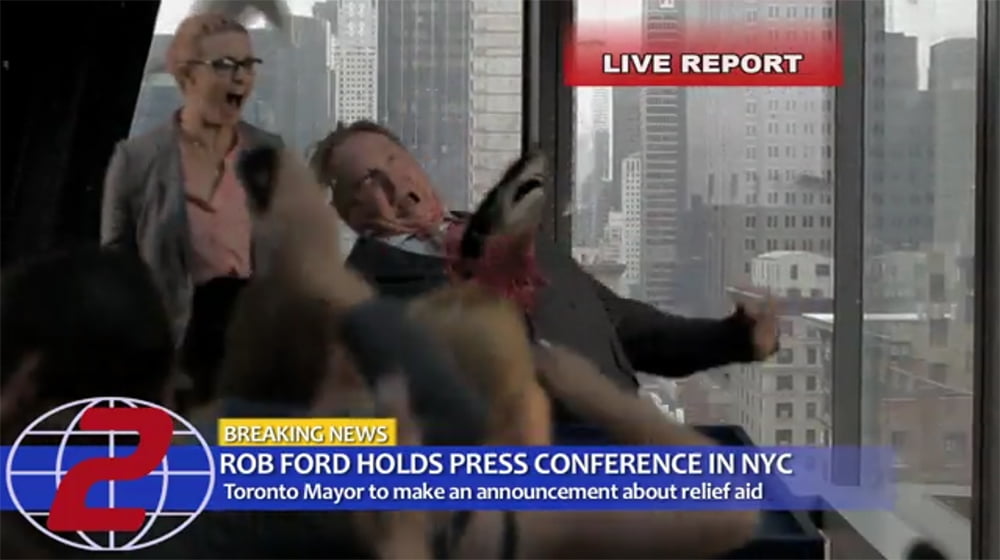 Space has released a clip of our “favorite” “mayor” “Rob Ford” from his appearance in Sharknado 2: The Second One. No, that’s not the real Rob Ford, of course, but it’s still worth a chuckle.

The video is actually a clip from the exclusive Canadian version of Sharknado 2: The Second One, which splashes down July 30 at 9:00 PM (ET) on Space. Sharknado 2 will air on SyFy in the U.S. at the same time.

As the press release sums up, “Toronto Mayor Rob Ford holds a press conference in New York, announcing that Toronto will offer relief aid to the Sharknado disaster in New York City. As seen in the clip below, the results are deadly.”

Nothing says good satire like a shark through a mayor’s chest.

Synopsis: In Sharknado 2: The Second One, the sequel to last summer’s social media smash hit Sharknado, a freak weather system turns its deadly fury on New York City, unleashing a Sharknado on the population and its most-cherished iconic sites – and only Fin (Ian Ziering) and April (Tara Reid) can save the Big Apple. Vivica A. Fox joins the cast as Skye, an old high school friend of Fin, while Mark McGrath stars as Fin’s brother-in-law.