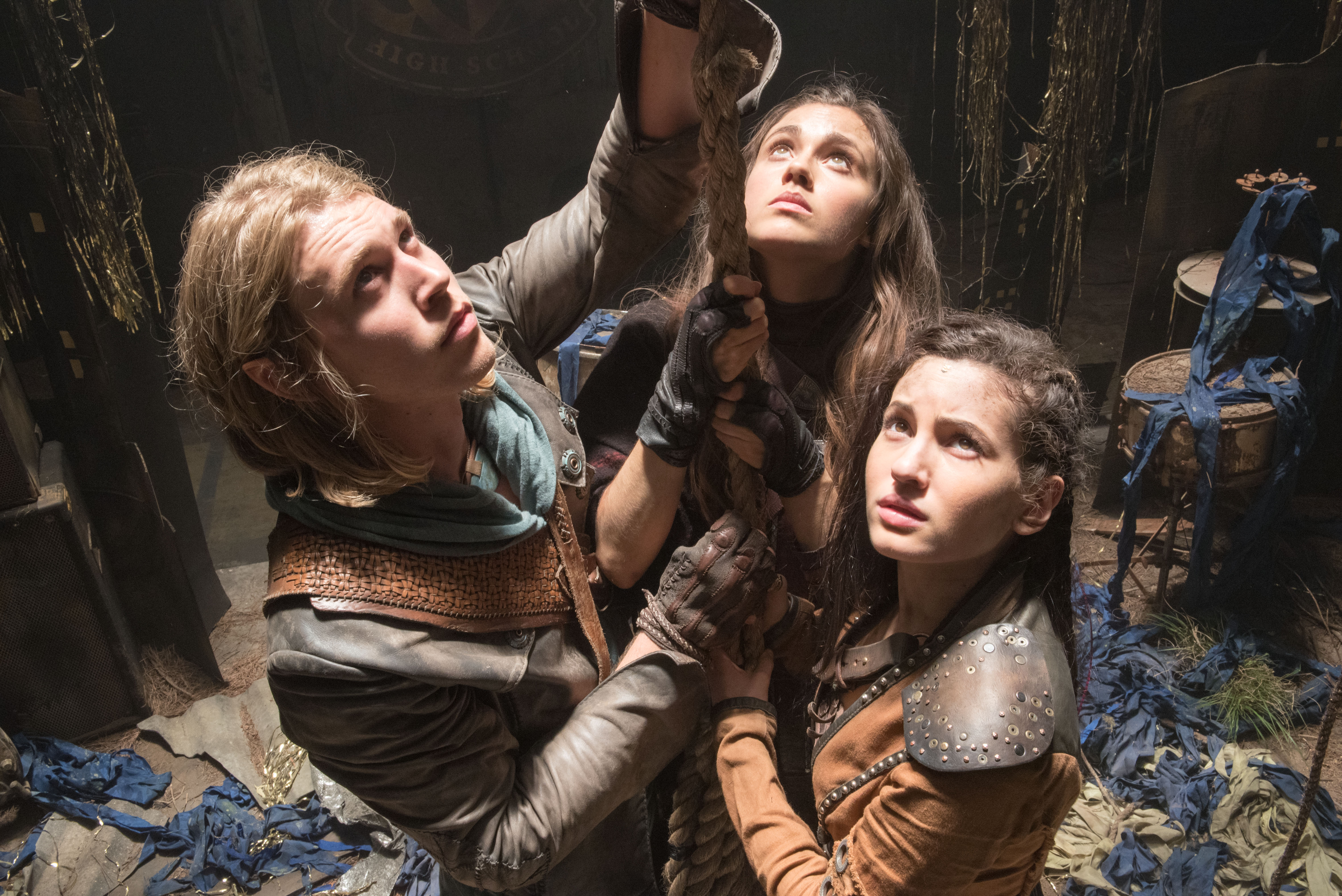 The Shannara Chronicles is a surprising new series that goes against any expectation I might have had, delivering a story and characters that feel alive and visceral, while maintaining a reality that is something like a Brothers Grimm fairy tale come to modern life.

When I first heard about the series, I didn’t imagine anyone was going to do the original books by Terry Brooks much justice, but my first moment of hope came when I saw the teaser trailer just a few weeks ago. If you’ve seen it, you’ll know what I’m talking about. The teaser sets up the concept of a world that exists a long time after the present day we know has nearly crumbled away, but the blood of mankind has evolved into new races, including elves, and trolls, and gnomes. The only thing left behind are fallen skyscrapers, the shells of vehicles, and other scrap.

In the premiere we meet a young elven princess–Amberle Elessedil, played by Poppy Drayton–who has decided to go against her father’s wishes and compete in a race to become one of the Chosen–a special group of young elves who protect and care for a mystical tree known as the Ellcrys. The elves have always cared for the tree, but it has been so long since the tree sprouted that no one really seems to believe that it’s magic or doing anything. It has merely become a symbol to the elves.

As the Chosen are told, however, the Ellcrys is standing as a barrier that holds a huge force of demons from coming back. Should it ever fall, the demons will be released to rain destruction down on the world. 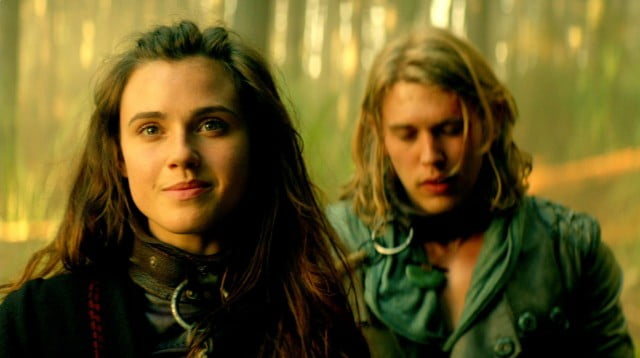 When Amberle manages to finish the race, and become one of the Chosen, she touches the tree and sees a vision of a future where demons have destroyed her home and everything around the once great tree. At first she doesn’t believe the vision is real, but when she receives another vision from the tree the next day–suggesting that she is going to kill someone she loves–she decides that she needs to get away before she does something terrible.

At the same time, the druid known as Allanon, played by Manu Bennett, wakes from a magic sleep and tracks down the half-elf Wil Ohmsford, played by Austin Butler, who stands as the last-living heir to the great Shannara elves, once the rulers of the realm, and he also holds the powerful Elfstones, which he needs to learn to use. To begin with, Wil doesn’t believe in the magic, but Allanon will eventually convince him that he needs to start believing so he can become the hero the world needs him to be.

As Amberle flees from the elves, the Ellcrys begins to show the first signs of being sick, and eventually drops a leaf that releases the first and greatest of the demons: the Dagda Mor. Creating a powerful “base” for himself, the Dagda Mor will ultimately lead the demons to war against the elves as more leaves start to fall from the great tree.

Eventually, Allanon reveals that it will be up to one of the Chosen to take a seed from the Ellcrys to a special sacred site so that the tree can be reborn and protect the world from the demons.

Early on, and sprinkled throughout the first four episodes, there are moments that are exactly what you might expect from a teen drama. The opening scenes are particularly cheesy, to be honest, but perhaps that was only to draw in younger audiences. These moments end up being brief, thankfully, and otherwise the characters are interesting and charismatic, and they have brilliant backstories, thanks mostly to the source material in Terry Brooks’ books. 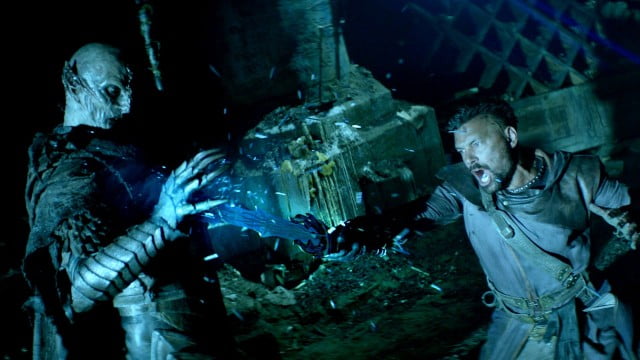 The Dagda Mor and Allanon

The world of Shannara is also beautiful, and rich, and diverse, and it constantly gives nods to the fact that the story is thousands of years in the future. Human technology is scattered everywhere, but it is worn down to the point of almost disappearing into the landscape.

Certainly we’ve seen post-apocalyptic stories before, but the beauty here is that we haven’t seen this kind of world filled with elves, and trolls, and magic. We also understand that, to some degree, magic isn’t really seen in the world much any more, which makes Allanon and Wil’s Elfstones, a resurgence of something much older.

The character tropes that are expected in fantasy are also turned around and upside down. Allanon, for instance, is more of a warrior-mage, and he brings muscle to the role of the spellcaster.

Wil is kind of a buff nerd with a big question mark about his ancestry and what his elf lineage really means, and the character is disarmingly funny. He’s the kind of protagonist who is bound to toughen up through the series, but from the start he’s not entirely a pushover.

And then there’s Amberle and the Rover (AKA thief) Eretria, played by Ivana Baquero. Both stars play tough, smart women, and that’s still a fairly rare thing on television, unfortunately. They’re fighters, and they have no problem facing off against men, or each other at times. It’s easy to root for both of them, and I really love the way both characters contrast, but also compliment each other in the first few episodes. 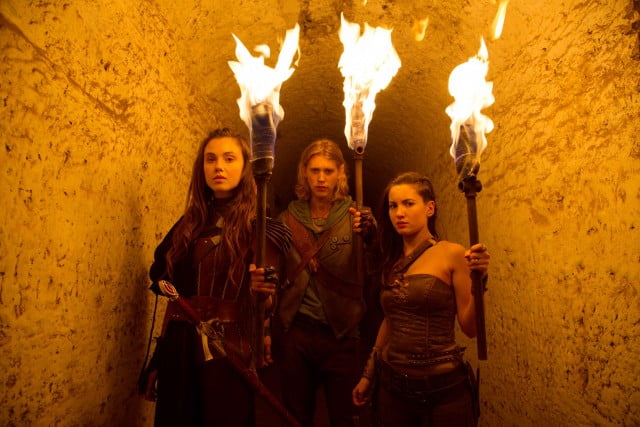 Some elements of the premiere falter, to some degree. For instance it’s possible to read into the story that Amberle, as the first woman to quest to be a Chosen, broke some sort of rule that helped to hurt the Ellcrys and bring about its fall. Perhaps that will play out better throughout the season, but it’s a pretty awful message if I understand it correctly.

So far I’ve watched the first four episodes, including the two-part premiere, and I can say that the series only gets better the deeper you go though. I’m already addicted, and I can’t wait to see where it goes next; minor flaws and all.

My first encounter with The Elfstones of Shannara, the second book in Terry Brooks’ series and the novel that the show is based on, was in the 80s, but I ended up re-reading it five or six times before it eventually went to storage. Since then, my memory of the plot has faded a bit, but some things have stayed quite clear, and I’m really impressed with what the show’s creators, producers, and director have accomplished. It feels like the same world I read, but it’s modern and clever with the way it brings the pieces together. Most of all, it’s a rich world to step in to, and could very well be a huge franchise for MTV. The show is also one of the best I’ve seen on television in months.

It’s also incredibly refreshing to watch a series and have a hard time comparing it to anything else. While the themes may sound like Lord of the Rings or even Game of Thrones, The Shannara Chronicles bears almost no resemblance to either. That may even be the best thing about it.