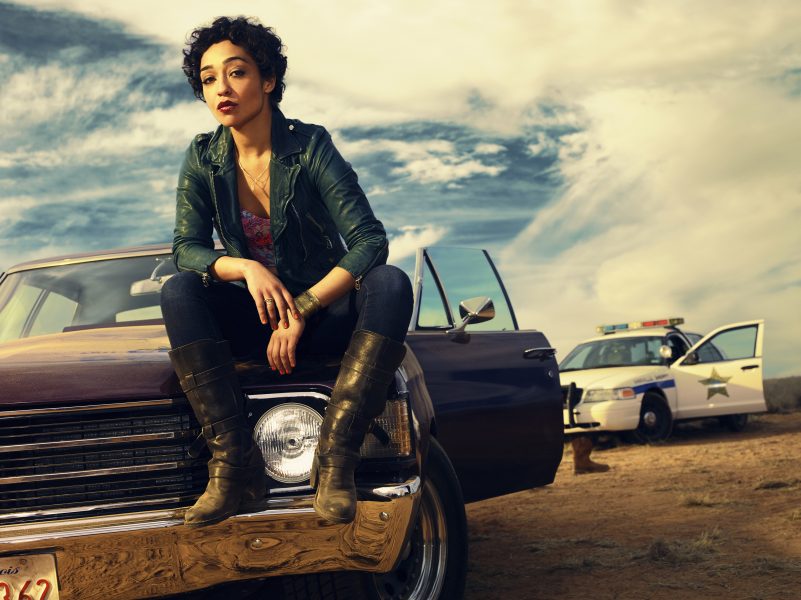 Preacher is like nothing you have seen on television. It’s dark and funny, twisted, and it’s a weirdly fun drama that’s brimming with action and heartache.

Dominic Cooper stars as the brooding but heroic preacher, Jesse Custer, who is possessed by an otherworldly force that hits him one day when he seems to have hit rock bottom. The supernatural series sets the Preacher up against all kinds of evil, but he’s not alone in the fight. Inextricably drawn together, Jesse teams up with two indomitable forces: Cassidy, played by Joseph Gilgun, and Tulip, played by Ruth Negga.

Tulip appears in the most Tulip way possible: fighting with a despicable man in the back of a car as it hurtles across a corn field. It doesn’t take long to get a feel for Tulip and her style, but she’s a complex character. Surviving one fight, Tulip enlists the help of two children and prepares for the next assault by building a bazooka out of tin cans and spare parts. She’s a fighter and a survivor, and it’s easy to fall for her character right away. She’s intense, but calm and cool underneath it all, and there’s a hint of sadness and hurt laying under the surface.

I recently had a chance to speak with Ruth Negga about the role, and adapting the iconic comic book for television. Here’s what she had to say about the series, which was adapted from the hugely popular nineties comic book by writer Garth Ennis and artist Steve Dillon.

Andrew Powell: I was so excited to hear about this show when it was announced. Did you read up on Preacher before you started filming?

Ruth Negga: “I was familiar with the concept. I was familiar with the sort of ethos. I know that this is a lot of people’s number one comic book, so that’s a bit scary. I hope we haven’t messed it up, but everyone has been so supportive and genuinely so kind that I’m pretty confident that fans and people who weren’t aware of it before will fall in love with it too, because I love it, and I love watching it.”

Negga: “Oh yeah, that’s the thing. Everybody on Earth–everybody has got to keep going to work everyday. This is a passion project. It’s not just run-of-the-mill. I think everyone was aware that we were making something special and everyone was aware that projects like this and scripts like this do not come one’s way too often. We were just so pleased to be there and it’s just such a privilege really to be involved.”

Andrew: Tell me a little bit about where things start out in Preacher.

Negga: “Well I think the best way to look at these first scenes is sort of a prequel to Garth’s comics. It kind of establishes this trio of misfits, and explores how they find each other and how they revolve around one another. It slowly introduces you to this world–this hyper-unreal world of Anvil in a way that is really quite extraordinarily original.”

“I think basically it’s a calling-card for Cassidy, Jessie and Tulip, and I think that the show creators have made this in such a way that by the time you watch the last episode you have developed such an affinity for these three criminals, and I think that people would have an unexpectedly tender spot for them.”

Andrew: How do we first get introduced to Tulip?

Negga: “In the pilot, Tulip is engaged in some conflict–that’s an understatement. She’s basically blowing things up and creating havoc and murdering people with corn on the cobs. That’s your first introduction.”

“I just think people get really nervous now when they see me eat corn.”

Negga: “I’ll tell you what. I enjoy working with good people; intelligent, clever people; creator people, who write intelligent, clever scripts. That’s really the bottom line. I don’t think I’m drawn to any particular characterization of a person. I just like reading and being things that are kind of quirky and unusual or with a very strong story, and interesting characters with depth.”

“I don’t search out to play tough people. I just try and speak out as much as possible for scripts with color and depth and directors who are passionate and kind. That is also essential. And who like actors. And likes actor’s contribution, because essentially, it’s all a collaboration. What you see on screen is what you see on screen, but that’s a collaboration of hundreds of people.”

“Most essentially, the director and the actors, the costumes, the hair, the makeup, the set designer. There’s a lot of people’s work that goes into creating this world that we see. That’s the part that I enjoy. I enjoy the collaboration. I learn something new everyday and it’s very fulfilling.”

Andrew: No, that’s a great answer. What can you say about Tulip’s relationship with Jessie and Cassidy? What’s it like in this first season because it’s a prequel?

Negga: “I think what’s quite interesting is you do get insight–I can’t remember which episode it is–into Jessie’s history, and how their lives came to be intertwined. Where that kind of relationship began.”

“When I read that episode, actually I got so emotional because you get an insight into Tulip–you see a fragility there, a vulnerability that is unexpected. You also realize that these people essentially are soulmates, and then they can’t really live without the other because I don’t think they could navigate the world properly without each other to be honest. It’s kind of a Bonnie and Clyde sort of relationship, really. That’s how I feel it.”

Andrew: What was it like working with Dominic Cooper in the show?

“No, he’s amazing. The thing about Dom is that he’s so kind. Everyone loves him. He’s kind and he’s got such an easy going character that it’s really easy. It’s like working with your best friend.”

Andrew: I’m sure you have a lot of time together on a show like this.

Andrew: Can you tease anything that will be coming up in the first two episodes that people are going to get excited for?

Andrew: That’s a great introduction to her.

Negga: “Yeah, it’s priceless. You couldn’t make it up, but we did.”

Andrew: Well thank you very much for the time, I really appreciate it. Definitely a pleasure, I’m a big fan.

Negga: “Thank you, it was a pleasure speaking with you.”