Summer Bishil and Margo’s mojo on ‘The Magicians’ season 3 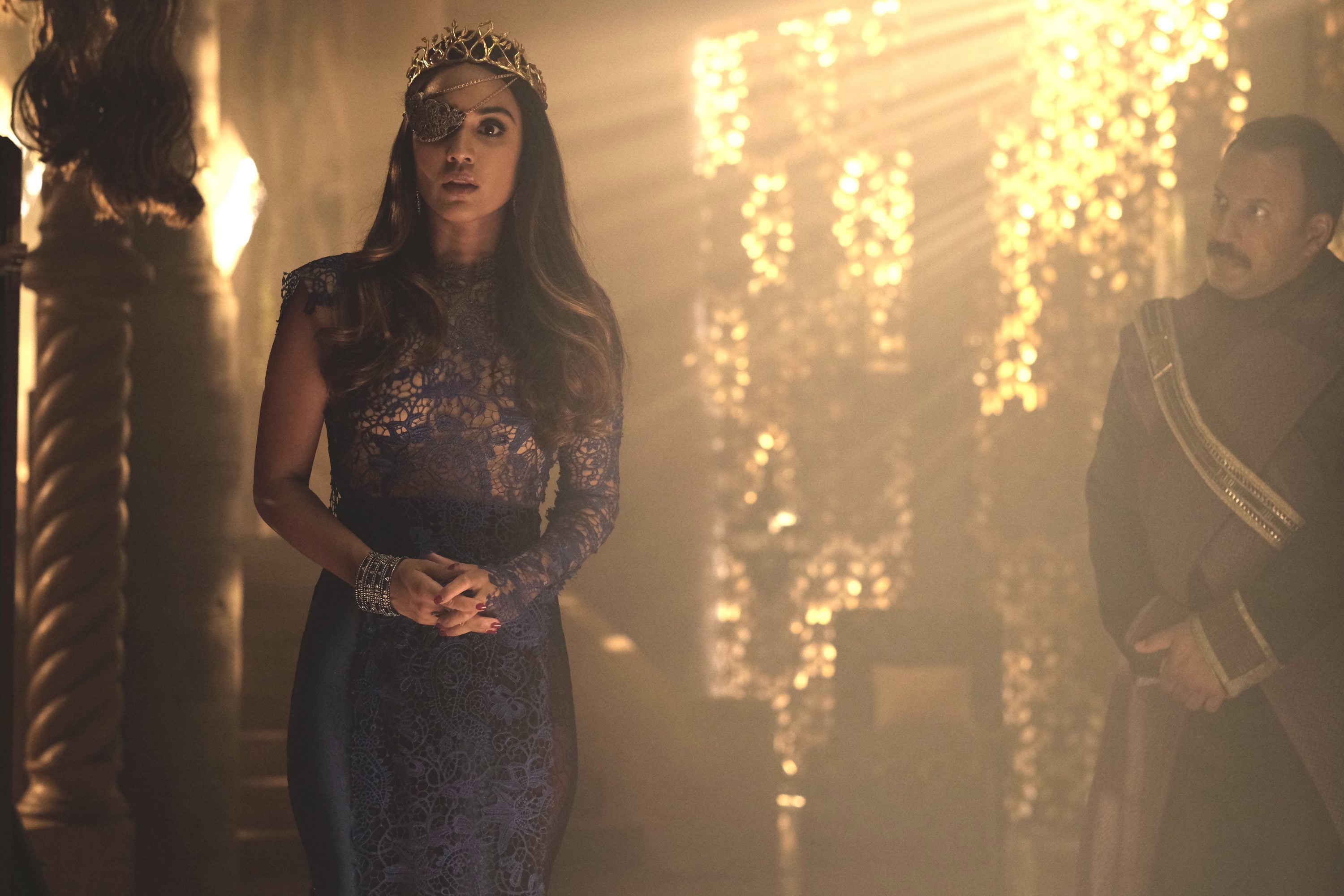 The Magicians have lost their mojo. At the end of the supernatural drama’s second season, magic seemed to simply disappear. Poof! That left numerous characters in quite the predicament, most notably Margo (Summer Bishil) and Eliot (Hale Appleman). The two current rulers of Fillory were about to contend with an army of inhospitable fairy invaders–and, now, they are powerless. However, in season three, audiences know that whether she’s capable of casting spells or not, never underestimate Margo. Ever.

Summer Bishil recently spoke with The Gate about Margo’s evolution, the magicians’ quest to restore magic and her latest zinger. The Magicians airs Wednesday nights on Showcase and SyFy at 9:00 PM (ET).

These characters are so captivating because they aren’t perfect. So, what are some of Margo’s strengths and weaknesses?

Summer Bishil: “Her weakness is probably how rash she can be in her decision-making, how quickly she can make very important decisions. It’s also an asset to her. It’s also a strength of hers as well. It gets her into trouble sometimes. She needs to refine her instincts. Her instincts ate one of my favorite things about playing her, but, it’s also the thing that really gets her into trouble, especially in the finale last year.”

“She made a deal with fairies, very quickly. Good intentions were there, but it was a horrible decision, and there were consequences. She lost her eye for it. Poor Fen was kidnapped and lost her toes.”

What do you feel Margo learned from that Faustian deal with the fairies?

“I think where Margo learns her lesson is under the thumb of the Fairy Queen. Margo sees what she was on the road to being. She’s seeing what not to do, and what all the things she dishes out so freely and so cavalierly look like.”

Eliot lashed out and banished Margo to the dungeon. She consequently sought to make amends. Where do those two stand right now? Are they BFFs again?

Bishil: “I’ve always said they are more like family, and family excuses a lot of dysfunctional behaviour. Family gets over a lot of strange circumstances for their bond. And, that’s their bond. It’s more familial than best friends or lovers or anything like that. They will always be OK. But, they also have bigger fish to fry. There has to be a conversation about behavior. There has to be a conversation about where they are at in their relationship and their changing needs. But, there are also so many other things to focus on as monarchs, that they are constantly trying to have that conversation and not being able to.”

As an actress, how did you react when Margot lost her eye as payment for getting home?

Bishil: “I kind of took it in stride. I didn’t think too much about it. That was a good thing, or I would have been stressing about having one eye. I liked it. It made her distinct. It really proved to be a challenge. I did not anticipate it being the challenge that it became. I thought it was going to be as simple as, “Oh, I’ll just have a fancy eye patch and I’ll just do what I have always done.” It wasn’t that simple. There was definitely more discipline required in my performances and more thought about my physical space and ways to communicate differently now that I had one eye. That was a good thing. It was the third season of the show and I didn’t want to do the same thing any more. I liked that I had this new challenge.”

Will audiences see a fashion line of eye patches for Margo now?

Bishil: “Oh my God. Yes, please. The world would be a better place with that. It was incredible the stuff that was being made for her eye. There were so many different eye patches that were coming out. There was an eye patch for every outfit. They matched her mood and her intentions and where her character was going. They were really beautiful. I was sad when I filmed my last time with them. As difficult as it was, it was sad letting go.”

Season two culminated with the fairies paying Margo, Eliot and their kingdom a little visit. Where do things pick up?

Bishil: “Things pick up kind of where they left off. We don’t get too far ahead. In season two, we didn’t. In season three, we haven’t, either. So, things are more or less where we left them. It’s the gang scrambling to understand where magic went, how they are going to get it back, and how they are going to communicate with each other. Some of the gang is in Fillory and can’t leave. Then, we have the others at Brakebills and scattered all over the place. You are going to see a lot of new pairings and that brought a lot to the show as far as chemistry and switching it up. The new pairings really enhance this year.”

There’s a lot of strong personalities between this group. How have the dynamics shifted since everyone saw each other and do they all play nicely together?

Bishil: “Oh, they play together beautifully. These strong personalities, when you put them together, no matter how different they are, it creates really great scenes and really interesting power balances. The more different the characters are in a scene, the more interesting the scene is. It helped the show. It was definitely a good decision. I got to work with some people that I hadn’t worked with before and that was exciting. We have some new characters. We have Trevor Einhorn playing Josh, and he’s fantastic. People are going to be really surprised by the depth of his character and where his character goes. Brittany Curran is obviously an amazing addition. They really explore them as this year goes on.”

Magic also defines these characters. What does Margo learn about herself once those abilities are stripped away?

Bishil: “She’s the same tough bitch she always is. She is a tough broad. She will figure out a way to be the most powerful one in the room, with or without magic. She is very committed to getting magic back. There is nothing she wouldn’t do for it. What you see this year is that her passion is just as serious and blind as some of the others for magic. She just doesn’t talk about it a lot. You see in the ways she commits to get it back and the decisions she makes and the sacrifices… it’s as important to her as it is to anybody.”

The gang goes on a quest to bring magic back. It’s all hand- on deck. What can you tease about some of the obstacles and threats they might face along the way.

Bishil: “The high seas are not a chartered territory. There are things that you run into when you are sailing unknown waters.”

In the bigger picture, does Margo have her own arc this season?

Bishil: “I think Margo had an amazing arc this season, and I’m not just saying that because I’m playing her. It was one of the most exciting years for me to play her. You see a huge evolution.”

“Last season, I ended it with her being a reactionary, almost this crazy woman talking about how to rule a kingdom and martial law. These were things she had no understanding of really and is talking out of her ass. I took her on a journey this year and stripping all of that ego and anger and all of that away, to find out what is really driving her and why and what it really means to her. I was very surprised by the depth of her this year as well. She really goes on a character journey and she’s changed at the end of this seasons. Physically and emotionally, she’s transformed.”

Audiences never get bored of Margos’s spunk, her quips and pop-culture references. Do you have any favorite from season three already?

Bishil: “Oh my gosh. There is a scene in episode one, that I did with Eliot, that has everything that you just referenced. There’s this scene where there are differently pop-culture references with Eliot. It’s one of my favorite scenes I’ve ever done as an actor. I’m so happy with how it came out. I think people are going to love it.”