The Lady and The Dale | Review 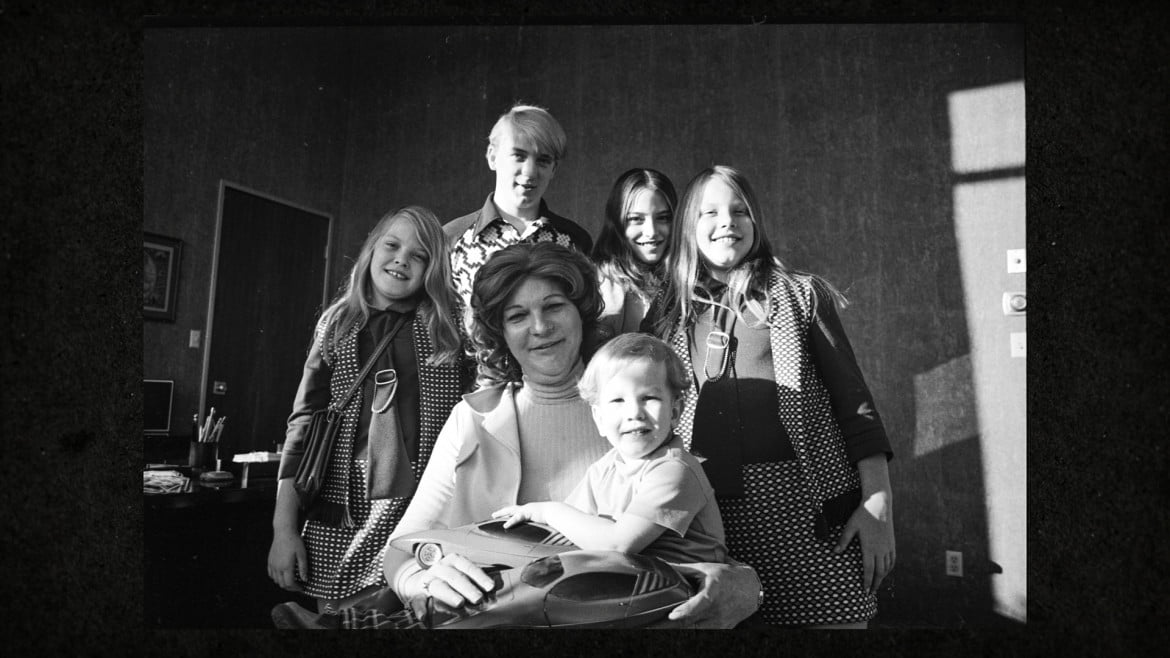 The Lady and the Dale is a thoroughly engrossing, but sometimes uneven look at gender constructs, family bonds, and one of the biggest frauds to befall the automotive world. Directors Nick Cammilleri and Zackary Drucker and Executive Producers Jay and Mark Duplass (who’ve become major players in the “true crime” realm as of late) have a lot of historical ground and themes to cover in their look back at groundbreaking entrepreneur and con artist Liz Carmichael. Four episodes doesn’t seem like enough when trying to encapsulate Liz’s curious place in automotive and transgender history, her rich family life, and the messes she created for all around her, but it’s also hard to tell where the truth lies when it comes to a grifter as savvy, cunning, and steadfast as Carmichael. It’s a fine and entertaining primer, but some missing pieces hold The Lady and the Dale back from reaching its fullest potential.

Liz Carmichael was always a con artist, but she wasn’t always seen by others as a woman. Liz was a charismatic, protective huckster from small town Indiana with a penchant for counterfeiting, check forging, and establishing fake businesses that would cause duped investors to lose their shirts. Liz had several failed heteronormative marriages and kids she never saw before meeting Vivian, the wife and woman that would help Carmichael the most towards fully transitioning in her 40s. Once Liz fully identified herself to the outside world as a female and settled down in California, it was time to leave the smaller scale cons behind and mount her largest scale effort to date: the unveiling of an unusual looking, three wheeled car known as The Dale (named after designer Dale Clift), which she claimed to be the solution to all of America’s gas shortage woes in the politically and economically fraught 1970s. With The Dale, Liz became one of the first and most respected transgender businesswomen of all time… for a moment.

The Lady and the Dale finds Cammilleri and Drucker (herself a transwoman filmmaker) building a documentary series around a subject whose life lends itself well to three different types of stories. Liz Carmichael is simultaneously a business person with a brilliant mind whose poor decisions cause them to fall from grace, a key figure in LGBTQ history, and a career criminal who defrauded people out of millions. While Cammilleri and Drucker have done an extensive amount of research into The Dale and Liz’s personal life, each of these threads often struggles to take centre stage, with more time needed to tie everything into a cohesive whole. It’s often hard to tell if The Lady and the Dale wants to see Liz as a sinner or a secret saint, with the car’s creator coming across at some points like someone who genuinely wanted to mass produce her invention and others where there’s no question about her guilt and evasiveness.

If The Dale was a grand con that was never going to see the light of day, Liz certainly did her best to treat most of the company’s employees well while they tried to come up with a scheme that could’ve legitimized her efforts. What The Lady and the Dale does best is to remind the viewer that there’s often a very fine line between being a budding entrepreneur and a con artist. Think Tucker: The Man and His Dream, only with a lot less ambiguity about the person behind the business. People will say or do anything to achieve their goals and claim their share of the American Dream, and often, those efforts can lead down dark paths filled with shady money lenders, coworkers willing to openly participate in subterfuge and securities fraud, production shortcuts, and endless cycles of lying to keep things afloat. Most businesspeople are forced to live by the old adage “fake it till you make it,” and Carmichael was one of the many unlucky ones who never made it. Cammilleri and Drucker speak at length to Liz’s family members, friends, co-workers, and those investigating The Dale, and while some are vastly more supportive than others, everyone the filmmakers profile are in awe of Carmichael’s brazen gumption. 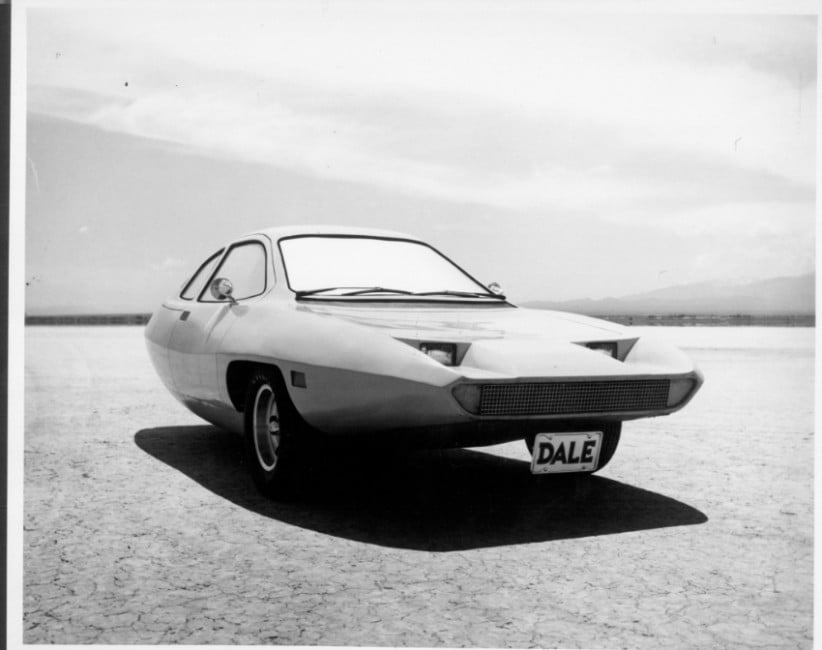 The Lady and the Dale does a decent job of trying to examine Liz’s gender identity in the context of her crimes, but it’s the type of story that’s begging for a whole episode devoted only to this facet of Carmichael’s life rather than having these discussions interspersed throughout the series. The Lady and the Dale adopts the Tiger King approach to true crime documentary filmmaking. There’s never any question that Liz is guilty of a lot of nasty things, but Cammilleri and Drucker show a great deal of sympathy towards their subject. One of the filmmakers’ interview subjects, trans historian Susan Stryker, does an exceptional job of illustrating and contextualizing how transpeople throughout history were sometimes forced into criminal endeavours as a means to survive in a harsh, unaccommodating world, but something about Liz Carmichael breaks that mold.

On one hand, The Lady and the Dale wants to celebrate Carmichael as an unlikely trailblazer who was routinely hounded by bigoted media personalities who wanted to see her fail (most notably Dick Carlson, father of Fox News blowhard, Tucker). On the other, there’s no denying that Liz was responsible for hurting and disappointing a lot of people, and that Carmichael was the type of person who’d turn tail and hit the road at any sight of trouble. The tone of The Lady and the Dale swings wildly between true crime condemnation and progressive sympathy, and without a deeper dive, it’s sometimes hard to tell what The Lady and the Dale is trying to say, especially when it comes to Liz’s relationship to her kids and her later years spent as a Libertarian, Ayn Rand worshiping recluse.

Some of the interviews with Liz’s family (including daughter Candi, son Michael, and brother-in-law Charles) uncomfortably sound like people from abused backgrounds who’ve convinced themselves that a lot of Carmichael’s actions were okay in the long run. There are villains who treated Liz with unquestionable and inexcusable cruelty (especially during her trial, which focused more on Liz’s gender identity and less on the facts that were sitting right in front of everyone’s faces), but The Lady and the Dale never wants to fully call its subject out on their equally long list of transgressions, many of which were unconsciously abusive to her loved ones. To do so would require more time and tougher discussions than The Lady and the Dale has time to mount. It’s also clear that some people closest to Liz have no desire or interest in participating here, while other participants that are no longer alive are deprived of a voice (especially Vivian), leaving some noticeable holes that raise further questions that remain unanswered.

But taken strictly on its merits as a true crime series, The Lady and the Dale is highly entertaining and significant. Utilizing some truly inspired and incredible looking “cut and paste” style animation for its recreations only helps to emphasize that Drucker and Cammilleri couldn’t make this stuff up if they tried. The nuts and bolts details behind the creation and collapse of The Dale are a dramatist’s dream (which probably explains why there’s another documentary about Carmichael due out later this year), and there’s no denying Carmichael’s status as an outright character worthy of such a unique profile. Although it leaves one wanting just a bit more, The Lady and the Dale appropriately feels like being locked in the front facing trunk of a dubious car that’s driven by a charismatic egomaniac. It’s a wild ride and a unique slice of both automotive and LGBTQ history. 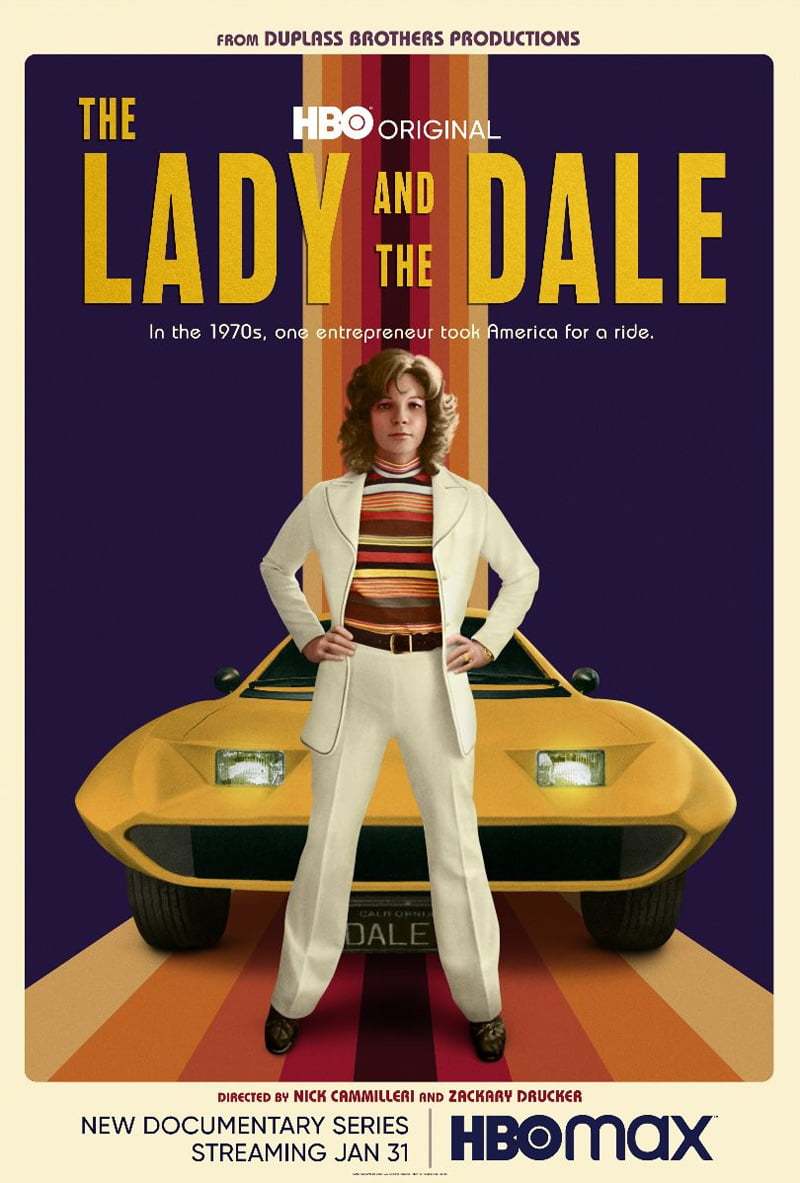