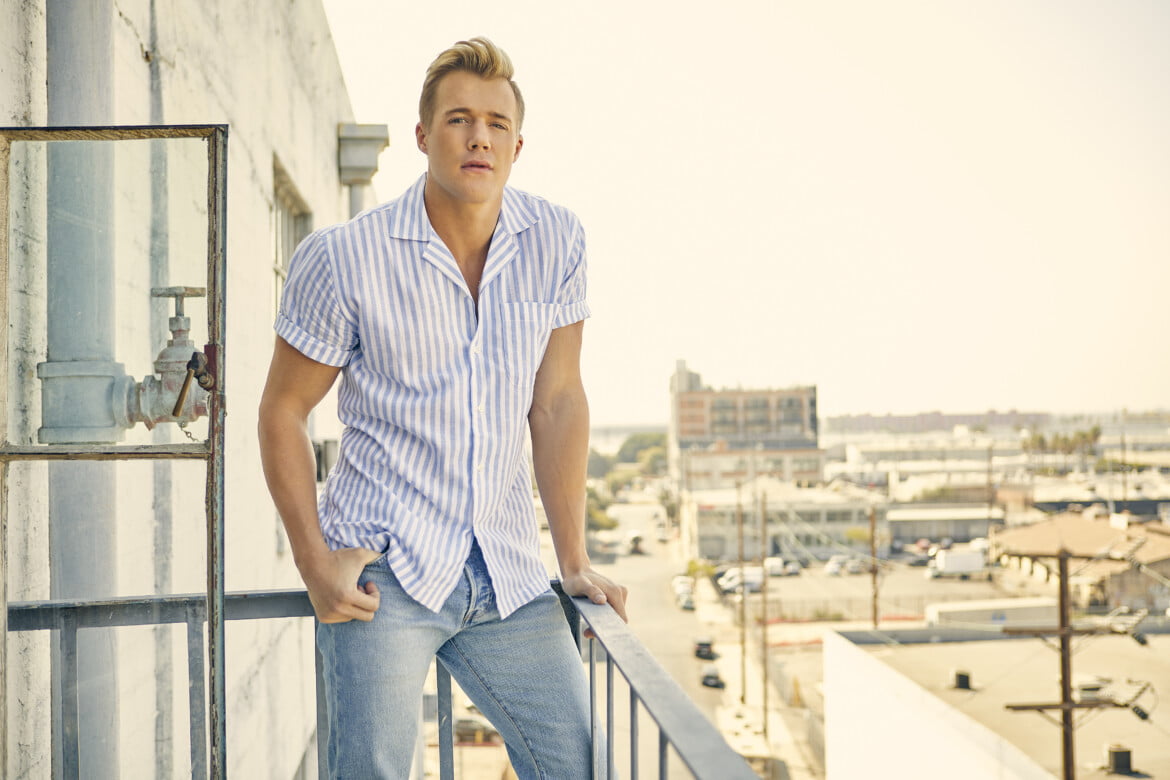 Clowdus shines as JJ Parker, a linebacker and quarterback for the school’s football team, the Eagles. A fan-favorite character, the loveable JJ is always the life of the party. And while he might come off as a bit of a goofball, there’s much more to him.

Clowdus recently spoke to me about his Teen Wolf roots, making JJ his own, being promoted to series regular this series and the importance of health and fitness.

IMDB lists your first credit as Teen Wolf. How did that part really ignite your passion for acting?

Hunter Clowdus: “It told me, ‘Hey, you can do this.’ Sometimes that’s what we need to be told. Sometimes we put a box around ourselves and we limit ourselves before we even get started. Sometimes it’s just nice to be given permission to do something. That’s what Teen Wolf was for me. Again, it wasn’t a role that really did anything to necessarily move the needle when it comes to people knowing I existed. But what it did do was it said, ‘You felt this fire in your heart. You kind of came alive. You loved it and maybe that’s something you should explore more.'”

Your character, JJ Parker, is always the life of the party on All American. He’s the comic relief and some might assume he’s just a goofball. How much do you feel that he’s underestimated?

Hunter: “I think early on, if we go all the way back to Season 1, Hunter the actor playing JJ, you always want to be acknowledged and appreciated as cool. You never want to come off, or at least I didn’t in this role, as goofball. But the more I leaned into that. I think there was a turn in Season 2 or 3, where I embraced that more than ever. In my opinion, it made JJ so much more attractive. And it made fans enjoy his presence more. He is fun when he comes on screen. I think that goes back to embracing whatever it is you bring to the table.”

“I think, too often, we try and fit other people’s mould when our superpower is the fact that we, ourselves, are unique. There is no one else in the world that is exactly like us. We tend to shy away from that, but when we lean into that, we kind of find our superpower. We find our strength. When it comes to underestimating him, there was that at first, but he’s finding himself. We see that once we get into season 4. We’ve been on a bit of a hiatus, a bit of a break, but we come back to the season in episode 8. We are all graduating and soon to be off to college. I really think you are going to see a transition in him, where that embracement is what grounds him. Through that, people will start to respect what he brings to the table more.”

On the flip side, what do you enjoy about exploring JJ’s cracks or insecurities when they do surface?

Hunter: “It’s so cool when you can bring your personal life into your professional, but it’s even cooler when your professional impacts your personal, when it’s in a positive way. A lot of JJ, the character, has taught Hunter the person to almost be fearless in things you believe in and trust you will find your footing along the way. He thought, in his mind, QB1 was his spot. JJ wanted to be a QB, but what he found was he was so talented and gifted at the Linebacker position. That’s what ultimately led him to getting a scholarship, which was a dream of his.”

How do you feel JJ’s love of football has shaped him?

Hunter: “There’s a lot of camaraderie when it comes to team sports, football especially, because there is a physical component. When you are going out there, you are laying your body on the line. There are tremendous highs and lows, when it comes to the emotional side. The physical is almost synonymous with that. I think you bond with those around you. It makes you view life more as a team sport. I think, perhaps, you are more willing to lend a helping hand when you see someone in need. And, hopefully, humble enough to ask for help if you’re in need. That’s one of the best things about the mental aspect of being in football or any team sport, where your success depends on how everyone is doing and not just yourself.”

What did it mean to you to get bumped up to main cast this season?

Hunter: “Yeah, for the past few years, I have tried to live by seeking affirmations for my actions and not my acknowledgements. That always made sure my head was screwed on straight and I just really focused on putting one foot forward at a time. And, instead of worrying about the building that was being built, I just focused each day on laying the most perfect brick I can lay. And when that day is over, it’s in the past and I go to the next day. Just lay that brick perfectly and let the building take care of itself.”

“The title of series regular is phenomenal, it’s humbling and it’s something that took me quite a bit of time to secure. However, it showed me there’s another level of myself I need to find. I’ve worked harder this season than ever. I’ve tried to grow more than ever. The title was a catalyst, but it definitely wasn’t something that I felt like, ‘Oh, now I have made it.’ I don’t necessarily think like you make it. When you feel like you’ve made it, you kind of ease up and do things in a different manner. I really wanted to double down on that opportunity to begin with, which again was the hard work, the dedication, the loving others and the loving yourself… those are the four pillars I always resort back to when it comes to grounding myself. Humbling, but it was another step in my journey, which is far from over.”

On All American, prom is in the rear-view mirror. Looking ahead, what can you tease about the returning episode, “Walk This Way?” And what does the future hold for JJ?

Hunter: “There is so much to unpack. I am quite a bit ahead of you guys. I will say you are going to see characters continue to mature in a way you have never seen before, because we’ve never done these things before. We did spend three seasons in high school. This is the first time where there’s a big transition from childhood to early adulthood. With that comes new responsibilities and new things in life that you really have to navigate in a different way. In childhood, you have the parents to lean on. You have a leader, if you will, in your life. In early adulthood, there’s no one telling you to go to bed on time. There’s no one making sure you do your homework. You are going to see these characters explore that world. It’s so dynamic. It’s so cool. I feel like every episode moves really fast. Starting with episode 8, things move really fast because they are just in that time in their life.”

You and your co-stars are lean, mean shredded machines. What is your philosophy when it comes to health and fitness?

Hunter: “The most important thing is health. Ultimately, we want to be around as long as we can. We want to still be able to do things 20 to 30 years from now, that we can do now. Prehab is the best rehab. Taking care of yourself now pays dividends later. It’s really cool. Fitness is right up my alley. I love training and I always have. I am very fortunate that my role calls for that. Of course, there’s this friendly competitive nature between us guys. We never know when we are going to be in a shirtless scene or in a tank top. We all want to look good, and we have all the excuse in the world because we are in our early college days and playing college football. We get to workout, and it’s connected to our job, so it’s a win-win.”

As an actor, what genres are you excited to explore in the future? Horror? Action? Comedy? Superheroes?

Hunter: “Action is really cool, if the action has depth. I don’t necessarily see myself doing something where things just blow up for the whole movie. But if there’s depth and it makes sense, and if there’s struggle and things you have to overcome, that’s me all day. I could also dive into the superhero realm.”

“And I say this as humbly as possible… I am one of the top 50 best built actors in Hollywood. I do think I will be up for some of those roles that do require a bit more physicality. But you still have to be a talented artist when it comes to the art of acting. I think something gritty. I think something a bit darker. I think the next three to five things will really open up for me and I’ll get to go deeper and darker. But, right now, I am just enjoying where everything is at and continuing to learn and grow as much as I can.”