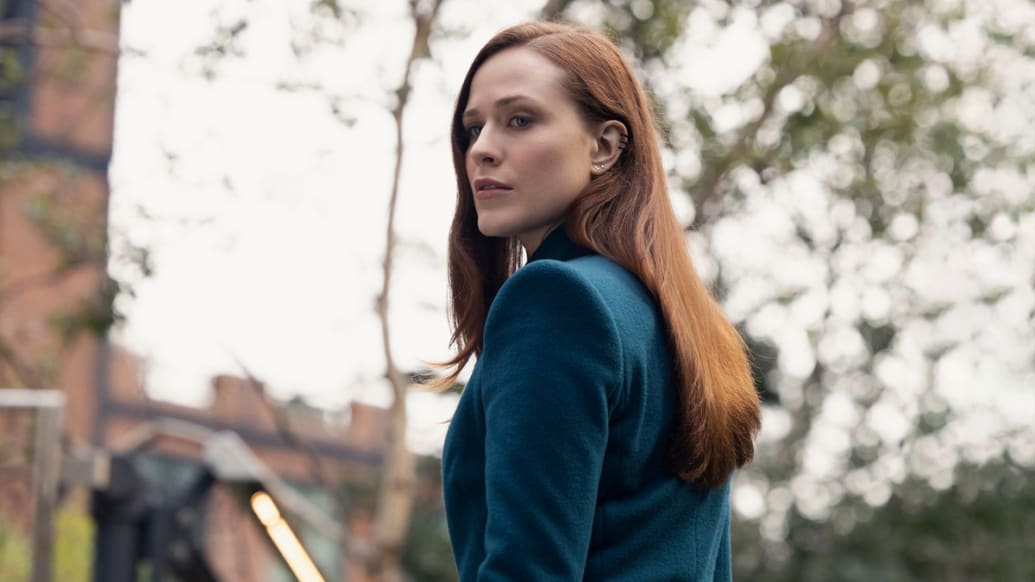 Westworld‘s future is still dark and foreboding, and while the third season ended with a bang, the fourth returns with an odd sense of quiet, seven years later.

The series has new tricks up its sleeves, but there’s no surprise that Evan Rachel Wood returns for season four, despite the apparent death of Dolores in last season’s finale.

Wood plays Christina, a writer for virtual reality games, and she’s feeling unsettled and lost as her roommate Maya, played by Ariana DeBose, tries to make sure she gets out to have some fun now and then.

The first episode in season four, “The Auguries,” sees the return of all of our favourites, including Maeve (Thandiwe Newton), Bernard (Jeffrey Wright), Charlotte Hale (Tessa Thompson), William (Ed Harris), and Caleb (Aaron Paul). There’s a sense that the same game we’ve seen is happening all over again, but I’m not sure the humans are doing all that well any more. This time it’s not their game.

Speaking to co-creator, writer, and producer Lisa Joy, and star Evan Rachel Wood, they talked about the scripts and development of the series, Wood’s ability to guess the show’s secrets, and how the two look at technology today in light of the show’s plot points.

Season three of HBO’s Westworld returns Sunday, June 26 at 9:00 PM (ET) on Crave in Canada and on HBO and HBO Max in the U.S.

What’s happening for Christina this season?

Evan Rachel Wood: “Well, wiping the slate clean again this season, starting from scratch with a new character. And I think as people watch the first four episodes, they’ll notice that there are some similarities with what Christina is going through in that she has a sense that some thing isn’t right in her world and she can’t quite put her finger on it.”

“She very much has this routine that she goes through every day, much like a loop, and she’s trying to figure out what is going on and who she is, which is not unlike what Dolores went through in the first season. But I think what’s going to be different is what she discovers and her purpose, and who she is.”

“Who is Cristina? That’s what we’re going to learn.”

Lisa Joy: “It was really awesome getting to see Evan act so differently as a totally new character and a completely new environment in the city. And I remember when I lived in New York for a while, I felt like a host sometimes. Do you know what I mean? Like, get up, take the subway, go to work, come back and get take out, get up, and just to see her character exploring those years in a city was really fun and reminded me of my salad days.”

Lisa for you, I’m curious if you had a plan for Christina this season and if Evan had played any part in how that plan worked out? And Evan, I’m curious for your performance if you’re playing this character and framing her through the sense of who Dolores was?

Wood: “Yeah, for the past couple of seasons, she’s been on such a mission and she’s had to keep her cards so close to her chest, so it was nice to sort of go back to this more vulnerable persona. Christina looks like Dolores, but in no way has the same kind of power or strength or belief in herself.”

“In her mind, she’s quite powerless and insignificant but like Dolores, she’s definitely noticing that something is very, very wrong that she can’t quite put her finger on just yet. I don’t have any input as far as like the arc of the character, but certainly the nerdiness of Christina, I felt like I could really bring a lot to that.”

“And so Evan goes on a horse and it’s like, we’re in like the equestrian dream here. And so I was like, ‘oh, my God, there’s nothing this girl can’t do.’ And so every season I tried to stump her, and I try to reinvent the character. ‘Can you do this? Can you do this?'”

“And she can do it all. So I’m just I’m just going to keep trying.”

Wood: “You’ve only found one thing that I could not do on the show, and that was put in a contact lens without blinking, which I don’t think is possible. But that was the one thing I couldn’t do. They stumped me on that. I’ve done everything else. [Laughs]”

Considering you can build and play with so many world ideas and characters, what is important for you to always keep constant in this world?

“But human nature tends to stay somewhat similar. And so I think it’s about embracing that reality within the sweep of history.”

Recently in the news I think the University of Tokyo created a robotic finger covered with living skin that can heal itself. I’m just really curious to know, when you see stuff like that, that does seem to sort of close the gap between the show and real life, what do you think about that?

Wood: “Sometimes I honestly, after working on the show, I’ve asked myself this question sometimes. I’m like, wouldn’t it just be crazy if the final twist for this entire series is that I’ve been a robot the entire time? This is their way of like revealing me to the world.”

Joy: “Next season’s script is just one piece of paper that says this has all been real.”

Wood: “This is all a documentary. But I don’t have Alexa in my house. I do have a self-driving car, but I don’t like things listening to me, and social media is something that I look at very differently after working on the show. Absolutely. Where my data is going and what it’s being used for and who’s clutches it’s ending up in. Absolutely.”

Joy: “I think technology will allow for so many great advances, right? Like in terms of new prosthetics and helping people who could really have their lifestyles enhanced by machine learning and body parts that can function very organically with their own.”

“On the other hand, the possibility of abuse on a kind of mental level, I do think that the last couple of years during COVID, we’ve had the Coronavirus pandemic, but we’ve also had a mind pandemic where people have been locked home, they’ve been on social media a lot, and social media is an A.I. It’s an algorithm that controls and hacks into our brains that can infiltrate our psyches and our psychologies and fundamentally change it, especially for younger kids. And so that’s a theme, too, that we definitely explore through metaphor in this season of Westworld.”

Lisa, for the complete series, do you have a plan where the show is going and what will come next? And do the actors know what’s coming?

Joy: “I have I have a roadmap. From the very beginning, Jon [Jonathan Nolan] and I have had an idea of where we wanted the season to go and the chapters of the season to unfold. But that’s not to say there aren’t things that surprise, and turns that we take during the course of it.”

“When you’re working with actors as incredible as the actors we work with, they bring so much depth in so many new parts of the character’s life that you haven’t seen before, so it makes you want to explore it more.”

“So, there’s a kind of railroad track that’s laid out, but we take little detours, and I think those detours are very important to the show.”

“As for telling the actors you’re very cruel and deny them all knowledge unless it’s need to know. However, Evan is very good at guessing our spoilers.”

“She has always been good at it. She is a thorn at my side.”

Wood: “[Laughs] I’m not as good any more now that the show has gotten more complicated. But I did call some things like way back the first and second season that are now circling, that are coming out in the fourth.”

Joy: “Yeah, she’d come up to me in the village and she’d be like, ‘I think I know, blah blah blah blah.’ ‘Shh. Shhh. There are other actors around. Don’t say anything.'”

Joy: “So paying attention to all that stuff and socially, when we did the first season, having been a woman working in the entertainment industry for some time, same as Evan, same as Thandiwe [Newton], I definitely think we had similar themes in common that we had encountered and to be able to express it through metaphor, through sci-fi, but something so deeply personal to us… for me as an individual, being able to share that and watch these incredible actors bringing it to screen, it made me feel less alone in the world. It was it was a healing process to watch Evan bring Dolores to life.”

Wood: “And healing to do that as well. In ways.”

“You know, Jon and Lisa have their finger on the pulse of the underbelly of society and sort of what’s really going on under the surface. So they’ve actually managed to just mirror my life and my evolution without me having to say anything. And so I feel like I’ve grown and evolved with Dolores and in sort of the same way that the character has, and gone through all the different emotions and feelings that she has in a weird way, except the, you know, more murderous homicidal feeling, no.”

“But the feelings of revolution and the feelings of noticing that there’s something wrong, seeing the bigger picture, asking different questions. The show is inspired me a lot.”

Joy: “Evan is very personally inspiring. She’s a wonderful friend and human being, but she’s also this incredible beacon of light for women. And she’s the most down to earth person ever. So we talk. We’ve known each other for a long time now, so to say that her character and the things she thinks about and things that are important to her, they absolutely permeate the way I think about story, because she is very inspiring person, frankly.”