The Story of Scotland, Part 1 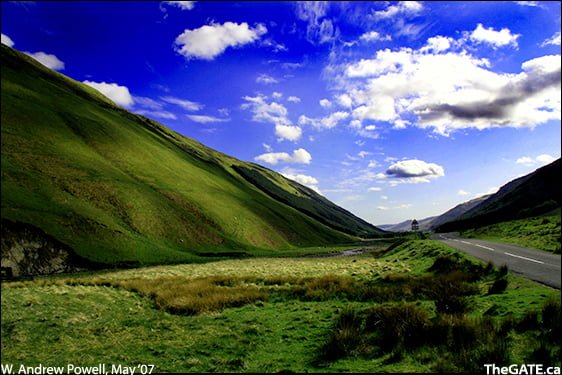 Some time ago, on May 18th to be exact, I went on a trip to Scotland with Aisha for a bit of a vacation. Okay, that would be 10 days of vacation all told, and we planned to drive around most of the country and see as many sites as we could manage. This my friends, is our story…

By 6:00 PM we were at the airport and we were in the air shortly after 9:00 PM. The most surprising thing about the flight was just the fact that it was almost comfortable, and we were not only well-fed, but even had enough room to stretch out. 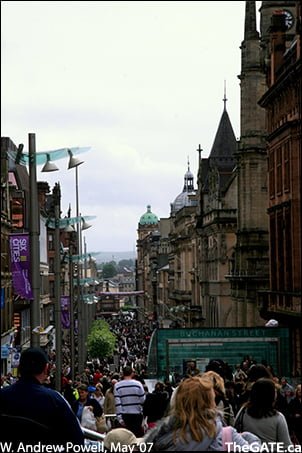 Around six hours later we landed in Glasgow (local date would now be May 19), made our way through customs, and finally (after some searching) found the car rental desk that was carefully hidden inside the outer wing of the airport.

And of course, for anyone who has tried to drive (for the first time) in a foreign country where everything happens on the opposite side of the road, well, that’s when the fun began. It wasn’t that it really took me so long to get the hang of it (although I almost drove into one car’s bumper as it was trying to get out of a roundabout), but it did take us a long time to get used to the road signs (or lack thereof). When we finally managed to escape the hell that is the roads of Paisley, we then got lost in Glasgow proper.

We did eventually make it to our hotel though (the really cool ABode), and we got to tour the city, see the stunning Glasgow Cathedral and Necropolis, and well, we got soaked in the city’s almost randomly continual downpours. Cool city, lots to see, and loads of shopping to be done, but man does it rain a lot. 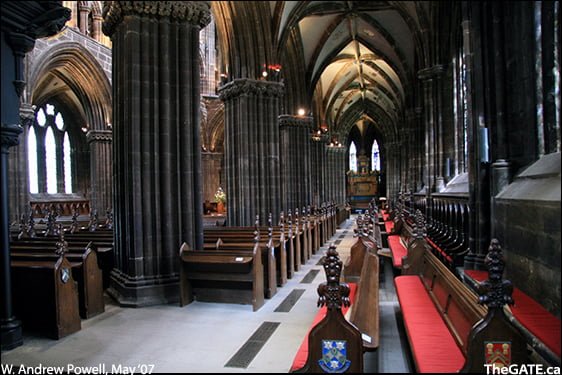 That night we ate at Michael Caines in ABode (which was downright spectacular) before we went out to a night club called the Savoy Disco with a guy we met, and drank some overly apologized for drinks (Darren thought that we deserved a better sampling of Glasgow than to end up at said night club).

It was a good night though, and a great way to start the trip. The next day (welcome to Sunday, May 20) we just had one real challenge – we had to find a way to escape the vortex-like clutches of Glasgow so we could get down to Moffat. We eventually did escape the crazy roads of the city and landed in picturesque Moffat in the early afternoon.

We took a stroll through the downtown, bought some candy at the Moffat Toffee Shop, and after checking in at Bridge House B&B we decided we should try and make it over to Melrose Abbey on the other side of the Borders since we might not have enough time the next day. 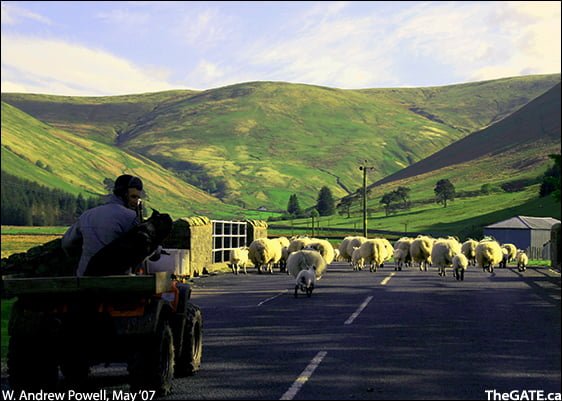 The catch was that the shortest road was a bit trickier than we expected. Let me define tricky for you: a road that travels through a winding valley, hemmed in by thousands of sheep who sometimes feel like wandering where you might be driving. It’s actually a beautiful drive, one of the nicest we had on the whole trip, but it didn’t make for a quick trip to Melrose. By the time we got there it turned out that the place was closed – the only positive was that we got to eat at a local pub (the Kings Arms) that served the most incredible Balmoral Chicken (chicken stuffed with the most perfect haggis).

And that’s when we learned an important lesson about Scotland. If you’re going to be out and want to eat, don’t expect food available at all hours of the night, and be ready to see everything from 9-5 since not much stays open past that except, well, bars. And thank God for that. 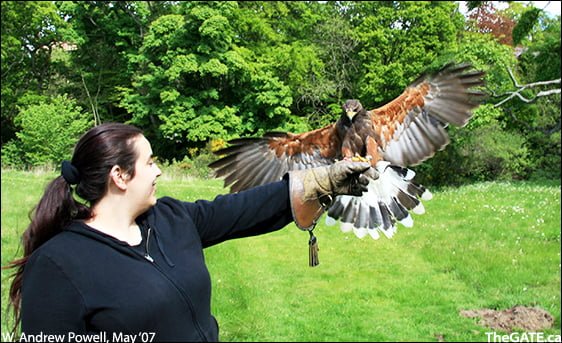 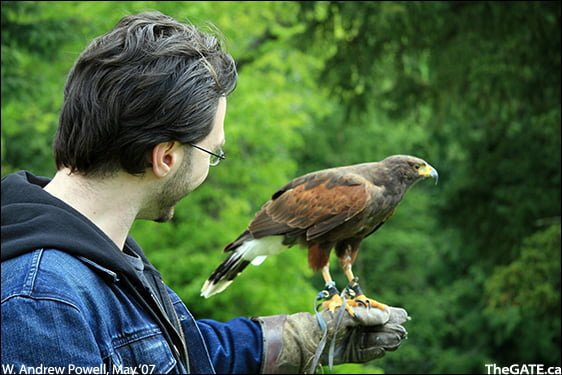 We then drove back to Moffat using an alternate route, went to bed, and were up early the next morning for our Big Day.

It’s now Monday, May 21 and before we could leave I had to walk up the country lane we were on and get photos of the animals in the pastures, and then we were off to Dalhousie Castle for our “Hawk Walk”. After getting lost here and there around Edinburgh we finally made it to the castle and just in time for our walk with Brenin the hawk. Both Aisha and I took turns bringing Brenin in off nearby branches, and it all went very well up until Brenin decided to do a wee bit of hunting for vole. Still, our guide got him back and we had an awesome time see him glide in to land on our gauntlets… and eat the wee bird parts we had to hold up. [laugh] 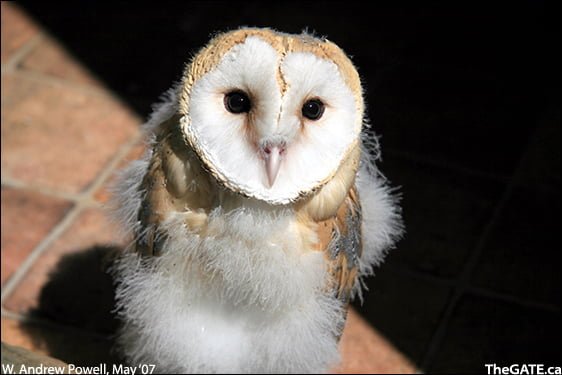 With a few looks around at the other birds, including Navajo the Great Grey chirpy Owl, Tundra (aka “Hedwig” from the Harry Potter films), and little fluffy Lilly the baby barn owl, we made our way off to see Aisha’s big treat of the trip – Rosslyn Chapel. It’s one of those places you hear so much about it’s hard to know what to expect – but once you’re inside it’s amazing how many carvings there are everywhere. Faces and people and marks and all these hidden things from floor to ceiling. 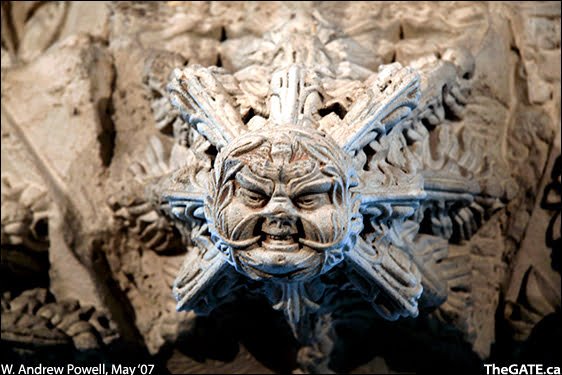 After that we drove back to the castle to check in and went on to Edinburgh to see the sites. Calton Hill was really something to see at dusk, and looking out over the old part of the city was an amazing sight – one of those ones you can’t forget, but it’s also a bit hard to describe. You just get a real deep-down impression of how old everything is there.

It must have been almost 8:30 when we left the hill top, but it was still barely in to sunset yet, but we figured it was time to eat something so we went to the Royal Mile and ate at The Taff, where I had Tatties, Neeps and Haggis, drank a beer, and listened to a traditional band play. This of course turned out to be one the most iconic moments of the trip for me – really amazing. 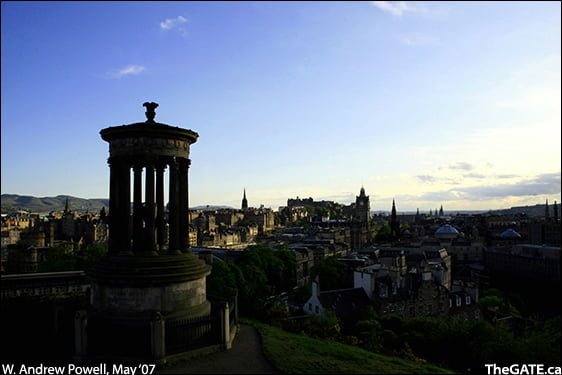 Drove back to the castle, said goodnight to the owls, and then went to bed. (Sleeping in a castle that night didn’t hurt for the whole “iconic” bit either mind you.)

… to be continued (more photos below). 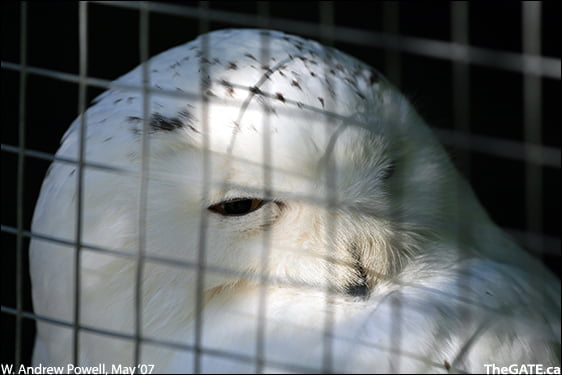 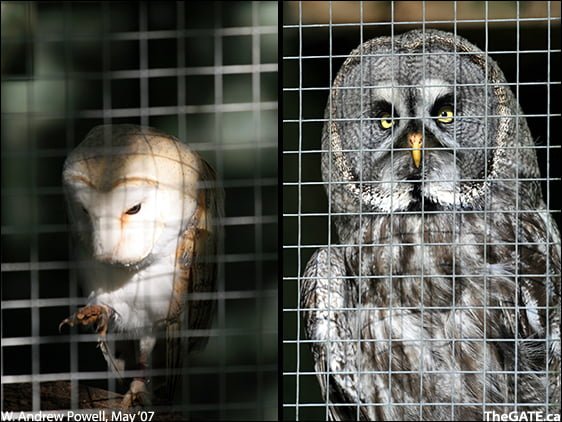 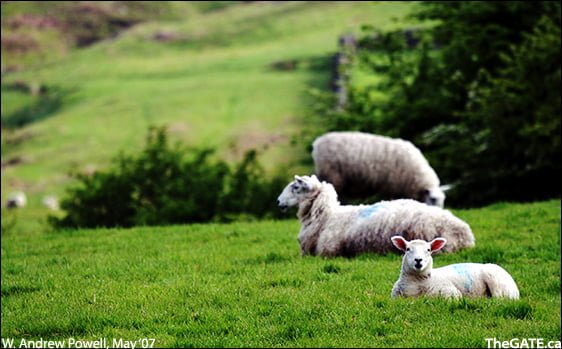 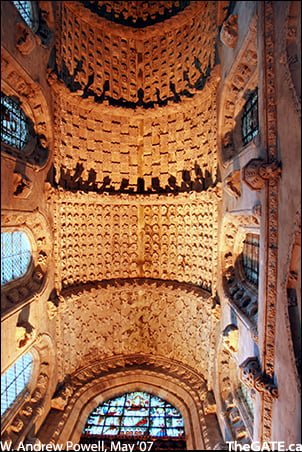