The martial arts extravaganza Sword Master comes with one heck of a pedigree behind it, and thankfully it lives up to what came before it, offering up one of the most crowd pleasing wuxia flicks in recent memory. Does it all make perfect sense? Nope. Is it kind of silly? That goes almost without saying. Was I grinning from ear to ear throughout? Absolutely. People looking for an entertaining, unpretentious martial arts flick will be in heaven with this one.

Sword Master is another big screen adaptation of novelist and screenwriter Gu Long’s Sword of the Third Master. One of the earliest and most noteworthy portings of the material was the Shaw Brothers produced Death Duel in 1977, although there have been plenty of other films directly or indirectly influenced by Long’s work. Director and co-writer Derek Yee (Shinjuku Incident, Protégé) approached Sword Master as a labour of love, working alongside producer and co-writer Tsui Hark (The Once Upon a Time in China series) for several years to get this made. The material even has a special place in Yee’s heart beyond it being a fun story to tell. One of Yee’s first acting gigs was in Death Duel as the fabled Third Master. With bona fides firmly in place, Yee unfurls a raucously delightful yarn of assassins, forbidden love, ancient mythology, and a whole lotta swordfights.

Like many wuxia flicks, Sword Master has a set up akin to a grand fairy tale, balancing many storylines and morals that will eventually and often quite obviously and unsubtly intersect. The primary plotline surrounds Swordsman Yen, a tortured hitman who looks a bit like Brandon Lee from The Crow with facial tattoos. He’s weary, but precise, exacting, and undeniably skilled when it comes to taking out entire crowds of enemies without breaking a sweat. He’s constantly chasing the chance to become famous by killing the only martial artist that’s seen as being better than he is: the almost untouchable Third Master. But by the time he finally makes his way to the almost mythical kingpin’s hideout, the ruler’s disciples tell Yen that the master has just died. Despondent, the assassin contemplates death and the purpose of his life, but on the periphery of all this there might be a bigger problem brewing. With the Third Master gone, there’s a struggle for power in the martial arts world. Whoever can wield the blade of The Third Master can lay claim to being the greatest, sparking a lot of fighting against factions, clans, and loners all seeking to lay claim to the throne. Also, there’s a good chance that The Third Master isn’t dead after all. 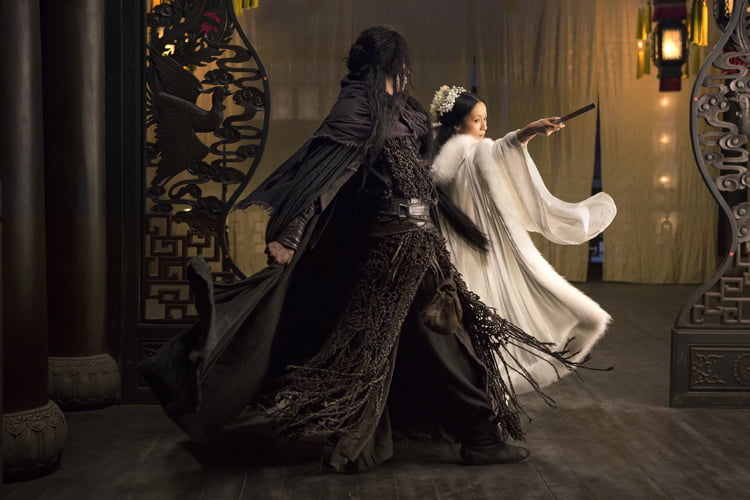 Sword Master is the kind of martial arts flick peppered with delicious bits of dialogue like “I sharpen my blade on talkative men’s throats” and “Your thirteen sword style can only kill me if I err on my seventh move.” Yee and company steep their narrative in traditional wuxia themes of honour, valour, love, and respect, and never shy away from the fantastical aspects of the genre. It feels in its most winsome moments like a bedtime story.

But while Sword Master embraces its sometimes cheesy nature wholeheartedly, it’s also balancing a fair deal of great character work. Every clan and swordsman wishing to prove they’re the best feels fully fleshed out, and for the most part the characters always maintain some shred of sympathy on the part of the viewer even if they turn out to be evil. There’s a likability to all of this that extends beyond visceral thrills, and casts a spell on the viewer by being watchable on entertainment value alone. Yee takes things just seriously enough to hold the entirety of Sword Master’s sprawling, sometimes unwieldy narrative together. It’s cinematic junk food chock full of classic clichés and tropes delivered as lovingly as possible, but it’s as balanced as a meal made solely from junk food could hope to be. Like professional wrestling, Sword Master is a head crunching soap opera, but it’s pretty great at what it’s trying to achieve.

Aside from some occasionally dodgy bursts of CGI, the action sequences and large scale fights are also top notch, especially a battle between a clan that’s trying to protect the family of their master and a bunch of menacing looking “dregs” with skull masks throwing more poison tipped weapons than there are people to kill. This segment kicks off the ludicrously fun finale for the film, which will send martial arts fans home on a high note.

If you love these types of films, you’ll love Sword Master. They still don’t make them like they used to, but Yee and his cast and crew briefly recapture some of that giddy fun for a brief, shining moment.

Sword Master opens on Friday, December 9th in Toronto at Cineplex Yonge and Dundas, in Markham at Cineplex Varsity & VIP, in Calgary at Cineplex Crowfoot Crossing, in Edmonton at Cineplex South Edmonton Crossing, and in Richmond, B.C. at SilverCity Riverport.

Check out the trailer for Sword Master: