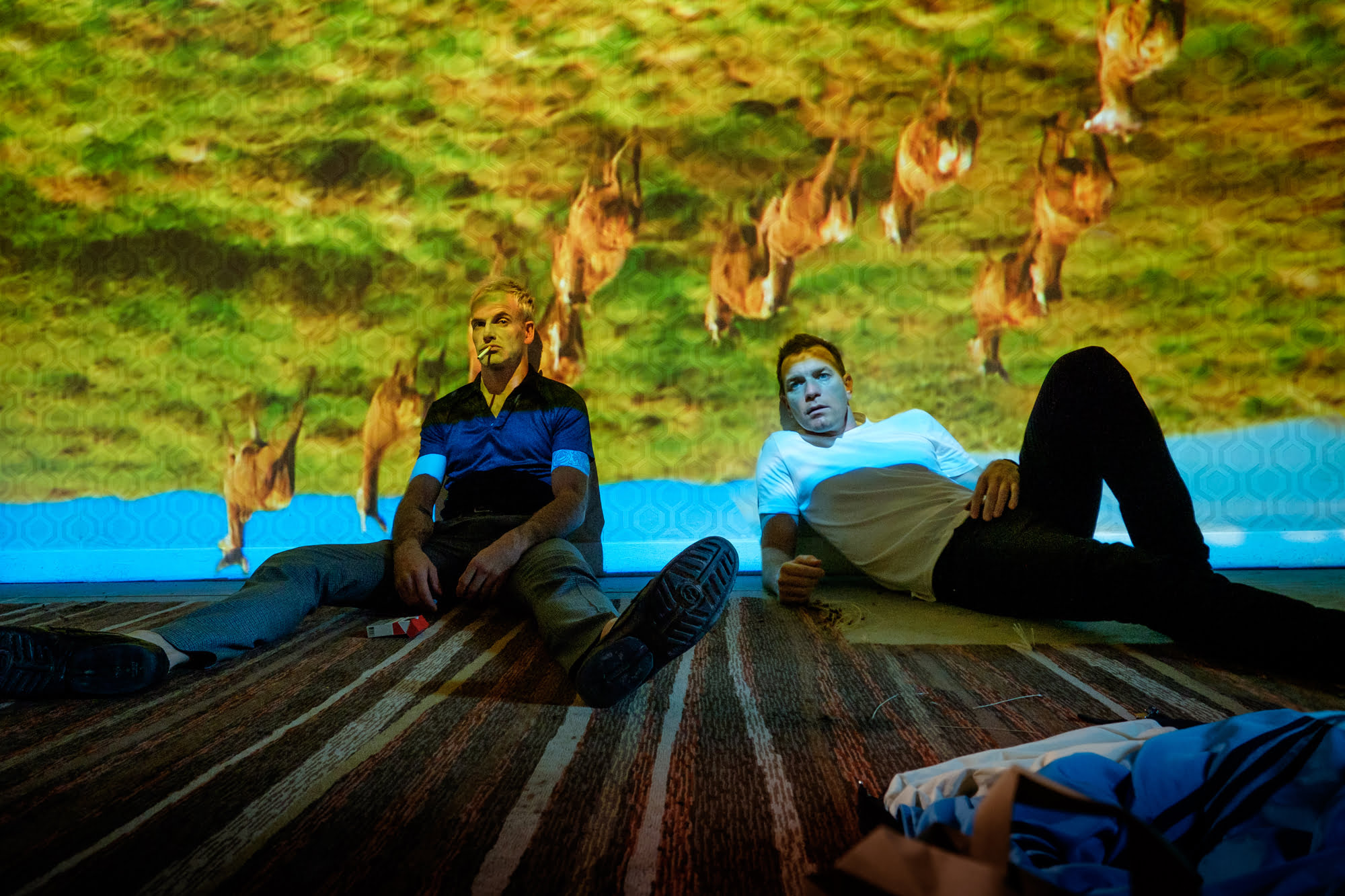 It sounds clichéd and trite, but T2 Trainspotting is a sequel that shows an unforced, natural progression of the characters from its predecessor. All good sequels should do that, but few actually achieve it with the grace, ease, wit, and poignancy that director Danny Boyle does here in this follow-up to his beloved 1996 adaptation of Irvine Welsh’s countercultural bestselling novel. An updating and enhancing of Welsh’s themes without betraying them, Boyle does the unthinkable by eclipsing the original film in terms of emotional impact and nuance, which is no small feat considering that Trainspotting turned twenty last year and most filmmakers wouldn’t dream of making a sequel that long after the original. It might be that the characters of Boyle and returning screenwriter John Hodge’s world are older, but not necessarily wiser, and I as a viewer feel like I have aged along with them, but more importantly T2 Trainspotting is a film about people who feel nostalgic about things they emphatically shouldn’t feel nostalgic about. It’s a film about people chasing old highs and ending up with new hangovers.

Mark Renton (Ewan McGregor) has been hiding out in Amsterdam following the events that transpired at the end of the first film, and following a brush with death he becomes nostalgic for the life of partying and drugs that he left behind in Glasgow. It’s not the same place that he remembers when he returns. Gentrification has created monolithic landfills instead of the grungy sprawl he was once accustomed to, with few outposts of his youth remaining standing. He happens upon his old buddy Spud (Ewen Bremner) just as he’s about to kill himself, following the disillusion of a happy and sober life that has led to a heroin relapse. Former best mate Simon (Jonny Lee Miller) is barely making ends meet as a pub owner and professional blackmailer, and to say that he’s skeptical about Mark after his betrayal in the first film would be an understatement. But in Mark’s return, Simon sees an opportunity not only to get even with his backstabbing pal, but also a way to appease his working girl girlfriend, Veronika (Anjela Nedyalkova). Simon and Mark team up like old times to try and “raise” the money necessary to open a “massage parlour” for Veronika, but little do they know that the hotheaded Begbie (Robert Carlyle) has recently slipped police custody, and he’ll be very cross to see either of them.

T2 Trainspotting pulls bits and pieces that went unused from the first Welsh novel, the follow-up pseudo-sequel novel (Porno), and makes up a few new elements for good measure, and instead of feeling off kilter, Hodge and Boyle have found a way to make all of it work rather seamlessly. What emerges from this pastiche of characters’ selective memories and marginal progression as human beings is something as empathetic as it is purposefully uneasy. With the exception of Simon and Begbie, everyone from Mark’s old life has cleaned up to some degree and attempted to move on without dwelling in the past. The only problem is that mentally and morally, none of them have moved along much at all.

Spud is a bit of a tragic hero, something reinforced here by Boyle and Hodge making the character into the dramatic MVP of this film once again, and the always underrated Bremner doing career best work. Mark is still largely duplicitous, but this time with a degree of haughty arrogance that makes the viewer see why the otherwise dubious Simon remains skeptical of hanging around with him. Simon is still a wreck, but he’s a focused wreck that has learned from the mistakes of the past and settled into an unlikely groove as a result. Begbie wisely hasn’t changed at all, and Carlyle goes all in on depicting the loose cannon as unapologetically insane and stunted following decades of incarceration. This feels natural; like going to a high school reunion and seeing faces you haven’t seen in ages and immediately being reminded of why you drifted away from these folks in the first place.

That sense of misplaced and misunderstood nostalgia permeates every frame of T2 Trainspotting. Boyle, never known for revisiting material, has made a film about nostalgia that also fully understands that it’s a sequel to a film that people are quite nostalgic about, both rightly and wrongly. Trainspotting wasn’t a film that took a moral high ground when it came to the exploits of its characters, and that’s what made it feel edgy and refreshing. These characters (save Begbie) also weren’t fully adult for the events of the first film. T2 Trainspotting captures these same characters – who have seen little comeuppance for their actions (save Begbie) – and recontextualizes them in a modern society where no one cares about what they did in the past except for the characters themselves. They’re nostalgic for the good old days, but Boyle and Hodge gently ask if we should join them. We’re still not asked to judge them, but to be skeptical of why they feel draw to each other once again. 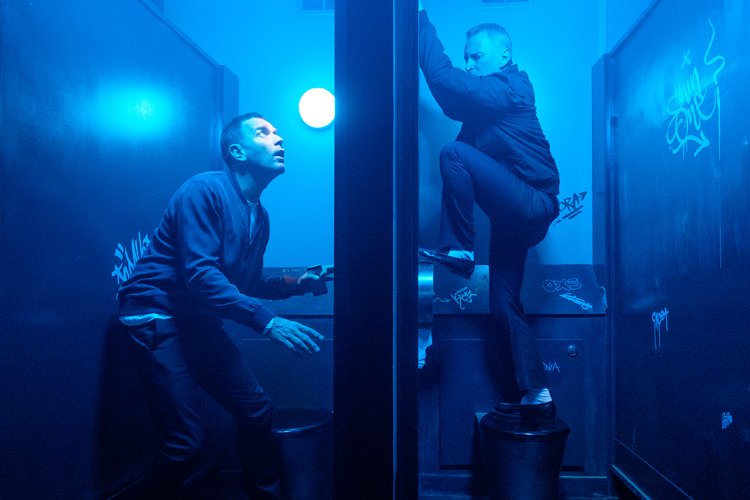 The characters of the first Trainspotting were, for lack of a better term coming to mind, a bunch of goofs. This sequel and the benefit of hindsight will make most viewers – even those who like the original – see them in the same way. There’s no way Mark should have succeeded in the first film, and there’s even less reason to suspect that they would again thanks to this film’s ludicrous, but well drawn out sense of escalation and complication. Furthermore, T2 Trainspotting also underscores the fact that the drugs weren’t the biggest hindrance to their lives, but their immaturity was and still is their biggest hang-up. They are, with the notable exception of Spud, their own worst enemies, drugs or no drugs.

T2 Trainspotting works whether you buy into the nostalgia factor or not. Hodge and Boyle work in plenty of call-backs to the first film, some obvious and some subtle. You can read these as either the characters reading too much into the world around them for meaning or as in-jokes designed to deliver fan service to those who liked the previous film. There are no wrong answers because are a flawless treatise on the fickle nature of nostalgia. Not only do Boyle and his cast know these characters intimately, but they also know how these characters are able to press the buttons of the viewer to maximum effect. It’s a cliché to say that they’re all able to slip back into their roles like nothing has changed, but outside of their societal standings, nothing has changed in their minds, and the actors play them as such. The film acknowledges that the world around them has changed, but they only accept the changes that conform to their particular viewpoints, which is one of the most damning and pointed social messages in any film of recent memory.

Despite needing passable knowledge or memory of the first film as a prerequisite here, T2 Trainspotting is stylistically its own beast. Cinematographer Anthony Dod Mantle didn’t shoot the first Trainspotting, but since the turn of the century has become one of Boyle’s most indispensible collaborators. Here, Mantle slows down the frantic pace of the original without sacrificing any slickness in the visuals. Like the characters and the only marginally updated soundtrack choices, the visuals feel like they come from the same place of marginal forward progress, but they also appear a lot more polished and modern. If the rest of the film is about marginal movement, the biggest leap forward comes in terms of how the film looks and moves. Visually, Mantle matches Boyle’s thesis that no matter how far we’ve come, some things will always look and feel the same to us.

There are some who will likely claim that T2 Trainspotting doesn’t really need to be made, and they’re probably right. There are some who will find it slight and treading on a lot of good will, and they wouldn’t necessarily be wrong. Such criticisms only skim the surface of what Boyle and his once again wholly game cast are trying to do. Not only does Boyle know that he made a superfluous sequel, but he has also made a film that defiantly invites criticism of its very premise. Such critiques are built into the fabric of T2 Trainspotting, and if that doesn’t add up to an unlikely formula for success, I don’t know what does.

Check out the trailer for T2 Trainspotting: