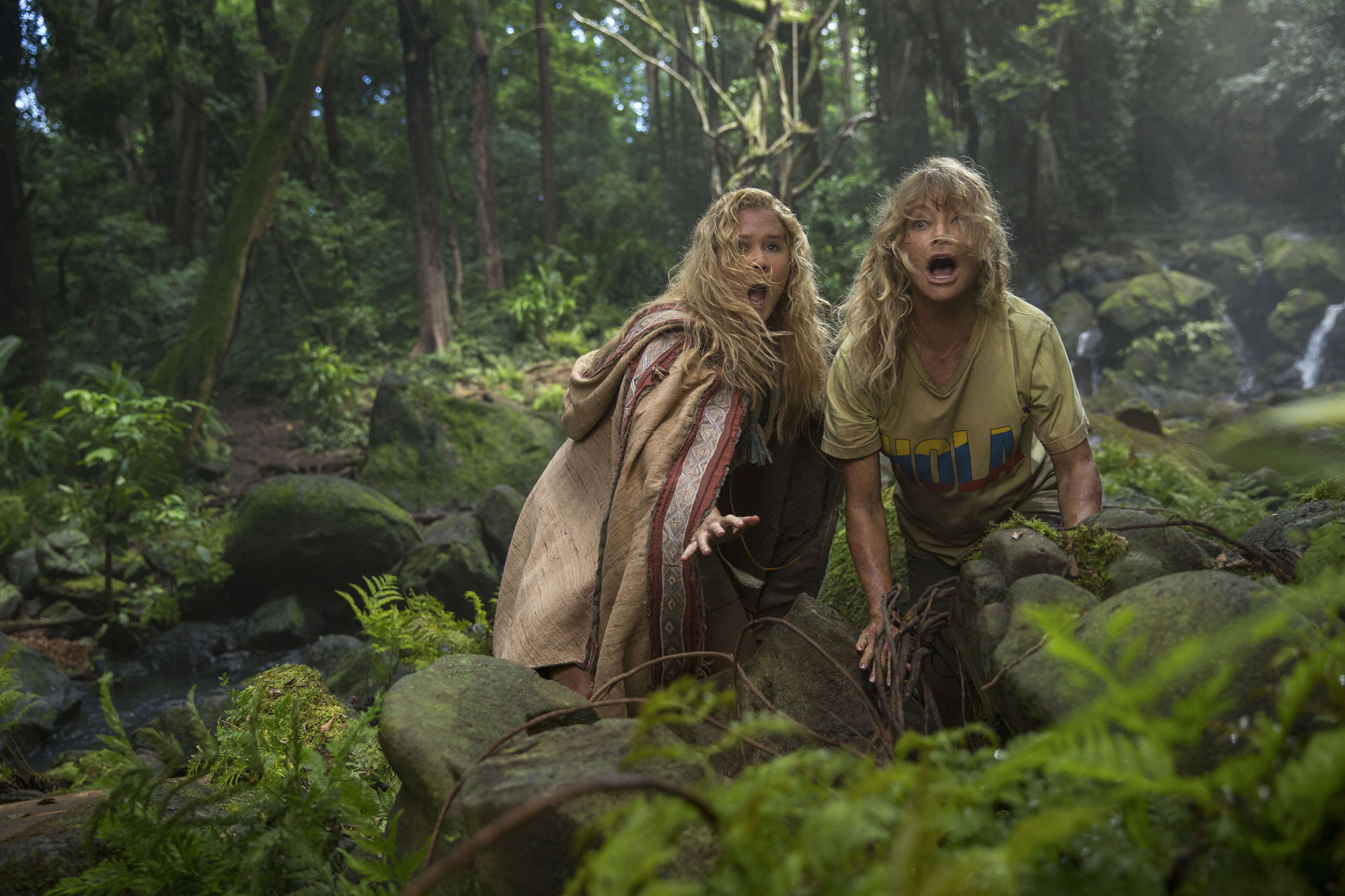 The Amy Schumer and Goldie Hawn starring comedy Snatched plays like a ninety minute trailer for a movie that never arrives. It’s the kind of film so packed with promise and a handful of big laughs that one can’t help but be disappointed when it ultimately ends up going nowhere and doing nothing. It’s a frustrating experience, but not a singular one. Plenty of films show great amounts of promise without following through on any of it, but few films of this nature are made by people as talented and usually reliable as the ones who made Snatched.

Schumer plays the kind of role she seems most comfortable with: an aloof, hard-partying, selfish, blissfully unreflective woman in her early thirties named Emily Middleton. Emily gets dumped by her equally selfish, but more professionally and sexually motivated rock star boyfriend (Randall Park) not long before the couple was due to take a non-refundable getaway to the beaches of Ecuador. Essentially friendless, Emily tries valiantly to find anyone willing to go on the trip with her. She settles on inviting her worrywart mother, Linda (Hawn), who has become a hermetic, paranoid cat lady that spends most of her days waiting hand and foot on Emily’s agoraphobic and aggressively nerdy/needy brother, Jeffrey (Ike Barinholtz). Linda reluctantly agrees to the trip, but remains cautious, bickering with her daughter about everything under the South American sun. Linda’s fears will be proven right after Emily’s flirtation with a handsome young man (Tom Bateman) makes them a target for a dangerous Columbian kidnapper (Oscar Jaenada).

After Trainwreck, her television series, and her stand-up specials, we know that Emily is the kind of role that Schumer could play with a great deal of ease. That low bar of difficulty means that Schumer has little room to disappoint other than making one think that it might be time for her to try something new for a change.

Snatched also marks the first big screen appearance for Hawn since 2002, and as shoddy as the film around her remains, it’s a joy to have her back. Hawn hasn’t lost a step, and her non-nonsense comic timing makes her the perfect straight-woman for Schumer’s raging egomaniac. Watching the two of them go back and forth so effortlessly almost wills the film into likability through sheer force of charm alone. With the duo working so well in tandem, Schumer and Hawn aren’t to blame for Snatched feeling so choppy and hackneyed.

The blame here has to fall to two other talents working behind the camera, or possibly those watching over their shoulders that gradually cut the life out of Snatched. Director Jonathan Levine has one heck of an entertaining C.V.: All the Boys Love Mandy Lane, 50/50, Warm Bodies, The Night Before. The same can be said for screenwriter Katie Dippold, writer of The Heat, the Ghostbusters reboot, and TV’s Parks and Recreation. Snatched never once allows either of them to showcase their talents as filmmakers outside of a few clever lines and intricate camera angles that feel out of a place in an otherwise mediocre film. 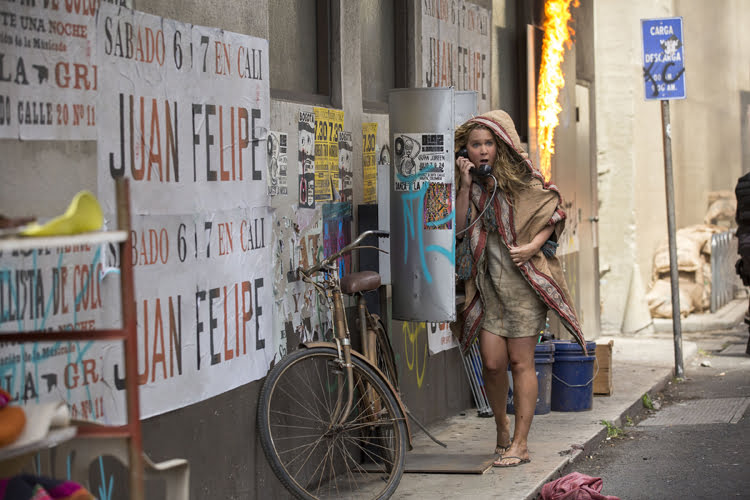 The pacing of Snatched is atrocious for both a comedy and an action movie, taking almost forty-five minutes – or roughly half of the film’s total running time – to get to any sort of tenuous point. There’s no need for Levine and Dippold to take this much time because the characters are so narratively malnourished and devoid of depth that they could be summed up in single word signifiers. The audience doesn’t spend the first half of the film getting to know Emily and Linda, so much as they sit around and watch them bicker, banter, and go about their days. Hawn and Schumer are good at that, but outside of just being themselves, Levine and Dippold are giving neither of them anything substantial to do.

Similarly, Levine and Dippold strand the rest of their cast in potentially juicy, ultimately thankless roles. Barinholtz has some mildly amusing cut-aways where the thoroughly annoying Jeffrey attempts to get the U.S. State Department to intervene on behalf of his mom and sister, but it’s the same kind of sheltered doofus that’s been trucked in from hundreds of other films. Some of the film’s biggest laughs are provided by Wanda Sykes and Joan Cusack – as a motormouthed traveller and a former Special Forces soldier, respectively – and the film sets them up to do something significant and cool before wasting them both on a gag so limp that one wonders why anyone bothered to cast people this talented in the first place. Jaenada and Bateman’s villains are the dictionary definition of “instantly forgettable.” The only supporting cast member to really shine here is Christopher Meloni, as mysterious American traveller who attempts to help out heroes escape through the Amazon to Bogota. Much like everyone else here, he’s too adept at comedy not to succeed, and just like everyone else, his character is paper thin, but at least this character’s ambiguity and thinness makes sense.

Snatched hints from its opening title cards that it’s building to some sort of grand finale, but once the low-key, easily resolved, unexciting, and distressingly abrupt ending arrives, the audience finally realizes that they just sat through a whole bunch of nothing. Hawn, Schumer, and their fellow cast members do everything they can to make this work, but it’s essentially asking the impossible of them. It’s curiously inert as an overall film, and I’m not sure if it bears the hallmarks of a film that was rushed into production based on the first draft of a screenplay or a film that was tinkered with so much throughout production and post-production that it bears little resemblance to what might have been a solid action-comedy.

Snatched is enjoyable in fits and starts, but also disappointing from start to finish. As a critic, you’re told to grade the film that’s on screen and not the film that might have been. Watching the dull, slapdash Snatched, it’s impossible to keep the mind from wandering in that direction. It was also more comforting to think about what might have been made with all of these talents under better circumstances. And if I didn’t think about these things, this review would have been a lot harsher.

Snatched opens in theatres everywhere on Friday, May 12, 2017.

Check out the trailer for Snatched: