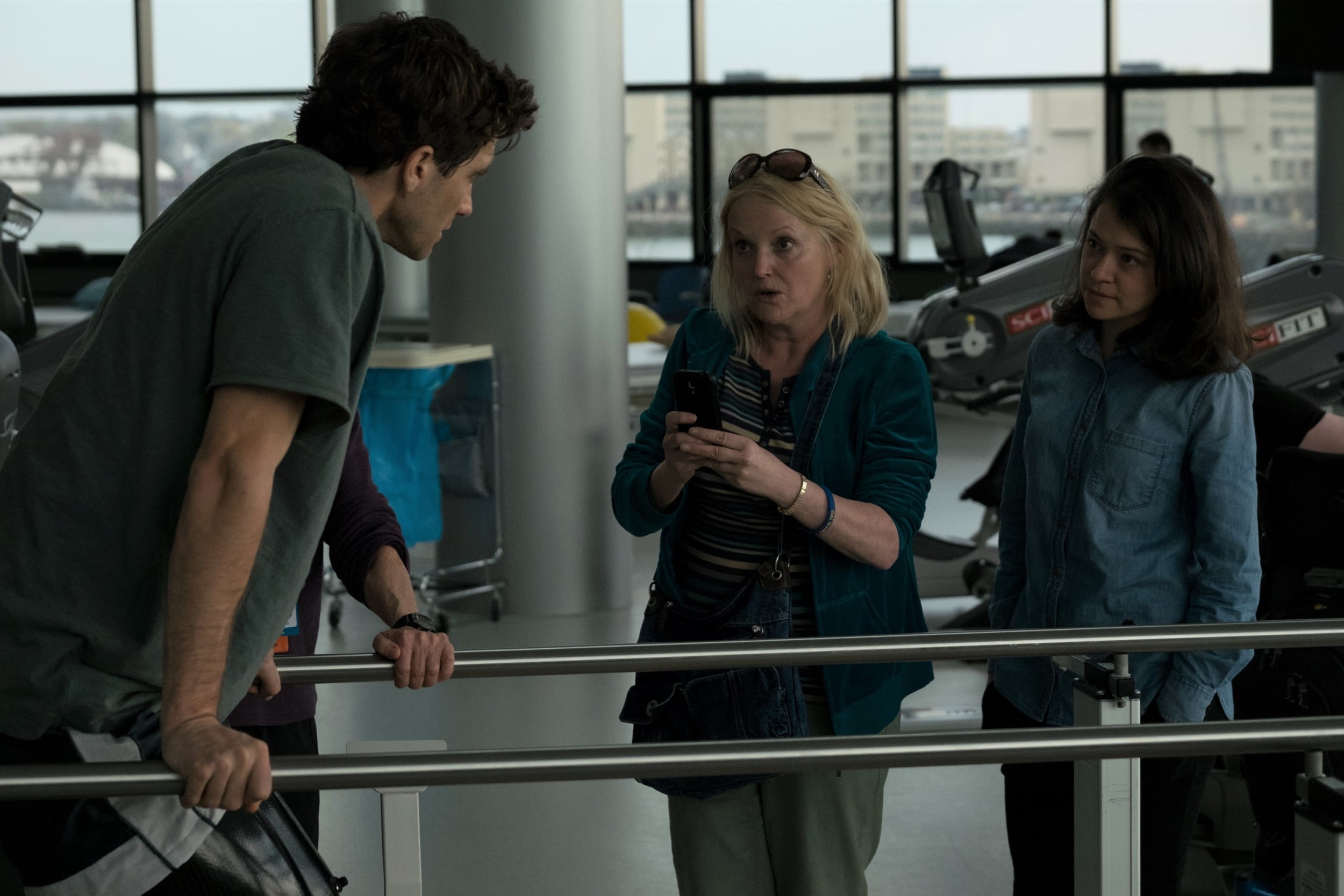 Miranda Richardson is always surprising. Even when you have an idea just how much she can inhabit a role, the next time you see her on screen you’ll likely still need a few minutes to fully accept that it’s Richardson who has vanished into another mesmerizing character.

A look over her credits from the last two decades shows off her mercurial skill, especially with the breadth of genres she’s tackled. She was Vanessa Bell in The Hours, Rita Skeeter in the Harry Potter franchise, a regular in the hilarious Black-Adder series, and Mrs. Victor in Empire of the Sun, just to name a few of her most memorable roles. (Coming up you’ll also see her as Madame Tracy in Amazon’s Good Omens adaptation, based on the endearing novel by Neil Gaiman and Sir Terry Pratchett.)

Richardson has worked extensively on stage, in television, and in film, but as she herself admit, it’s the allure of film that keeps drawing her back.

In David Gordon Green’s Stronger, Jake Gyllenhaal plays Jeff Bauman, one of the people in the crowd at the 2013 Boston Marathon. When terrorists set off an explosive, Jeff loses both of his legs, which forces him down a terrible path that leads to a reevaluation of his entire life. Miranda Richardson co-stars as Patty Bauman, Jeff’s working-class mother, who has a hard time dealing with all of the changes, especially the woman, played by Tatiana Maslany, who moves in to try and help Jeff heal.

During the 2017 Toronto International Film Festival, I was fortunate to sit down with Richardson and chat about her incredible career. Read the full story below, and let us know your favorite role from Miranda Richardson’s career.

Stronger is in theatres now.

Andrew Powell: I love the fact that you mentioned earlier today that you don’t think people really understand you…

Miranda Richardson: “Yes, I’m very private. I don’t really talk very much about that–I mean about being expressed in the work. I know in the past that I’ve joked about shooting myself in the foot by doing lots of different types of things and people maybe not recognizing me and indeed in [Stronger] a couple of people said it took half of the movie to realize that [I] was playing this [part].”

“It is a joke but at the same time people can feel insecure with an actor if they are so mercurial or whatever it is. It’s a different kind of acting. It’s acting that interests me though. Transformation is a part–one of the fun parts–of what we do, whatever that means, whether it’s a physical change or whatever.”

“You know I don’t know how one changes that. It’s probably also due to the fact that I move between genres a lot, and I’m not constantly doing film–I move between, you know, TV and film, and I’m going to do some theater again which I haven’t for a while. And I almost feel like I could be French you know because the French just get on with doing their thing. And then sometimes somebody will come over here and do something amazing and people will say, ‘Oh my God. I’ve never seen them before.'”

“So it’s just a sense that I have, and you know I’m not American and I haven’t lived here. I haven’t gone on that road.”

Powell: But it doesn’t seem like you need to.

Richardson: “Well thank-you for that.”

Powell: I looked through your list of films because I could think of a number of roles that I remembered, and looked and saw a few more. So it’s fascinating for me to see the breadth of your work, and I wonder, what do you think about actors who stick in one vein? Because to me it seems like you’ve got such a refreshing palette to play with whereas other actors seem to be so much more confined.

Richardson: “I don’t know that it’s wrong. I think people make the choices they do for particular reasons. And some actors are good at inhabiting a certain kind of role and the public also looks forward to seeing that and if they happen to step past that and do something radically different, it’s just like shock horror, or shock delight. But it’s more noticeable because I’ve been doing a similar thing for a long time. And any kind of a label–really I kick against any kind of a box that somebody is trying to put me in–I kick against.”

Powell: It seems like you’re having fun. You must be recognized a lot for things like your work in Harry Potter…

Richardson: “In which I did not very much at all, but it is a seminal franchise.”

Powell: They took out a lot of Rita’s story from what was in the books too.

Richardson: “I know. It’s sad, really. I would have liked to do more, but ultimately it was a cameo. But yeah a lot of photos that you see with the fans are of Rita Skeeter, and other work has been done, [but] it’s okay.”

Powell: Do you have a favorite role? One role that stood out in terms of just being meatier, or it was more fun to play?

Richardson: “I really enjoyed working with [Robert] Altman. We did Kansas City, a film that didn’t get you know wonderful press but boy I enjoyed the process and I loved the end result as well. I loved the integration of the music in it and having the opportunity to see and hear those musicians while we were filming it. You know I was sad for him, that he didn’t get more kudos.”

Powell: Do you think sometimes there’s work that ages better as well in terms of seeing something again a few years later?

Richardson: “I’m not thinking so much from the performance but I think Nick Roeg for instance, somebody who was always ahead of his time, and then he won’t necessarily get great press at the time but then you know his films bear so much repetition of watching. They seem to get better and better for me, which is what you want. I don’t want an immediate–you know fast food success or forgettable stuff.”

“I think he’s an amazing filmmaker and I had the chance to work with him and I feel the same about the movie. We did Puffball, you know it was kind of like truly divided people and I wasn’t sure what I thought of it.”

“And then I watched it again just before we went to a film festival in Turkey with it and I thought, ‘Hey, I feel like this is a whole different movie.’ So, yes I think some ripen, like cheeses. [Laughs]”

Powell: I feel bad for some films that never get to have long-term exposure. There are so many film releases now that you can’t always go back and look at some of the old movies as much and maybe as much as they deserve. In terms of your your work coming up, do you have something you’re aiming to do or try?

Miranda Richardson: “I’ve always found that an odd question because you don’t know until the project is in front of you and you are assessing it. I do love film and the history of film and the glamour. Of course I want to work with terrific filmmakers. So that is the general goal.”

“In the short term I’m doing this series since June and we were going on until mid October and then I’m going to do a new play in London, which is exciting, you know.”

“So that’s just the short term goal and I hope that there is traction. Most everything else I hope people will see me again in a different light.”