Review: ‘In the Fade’ 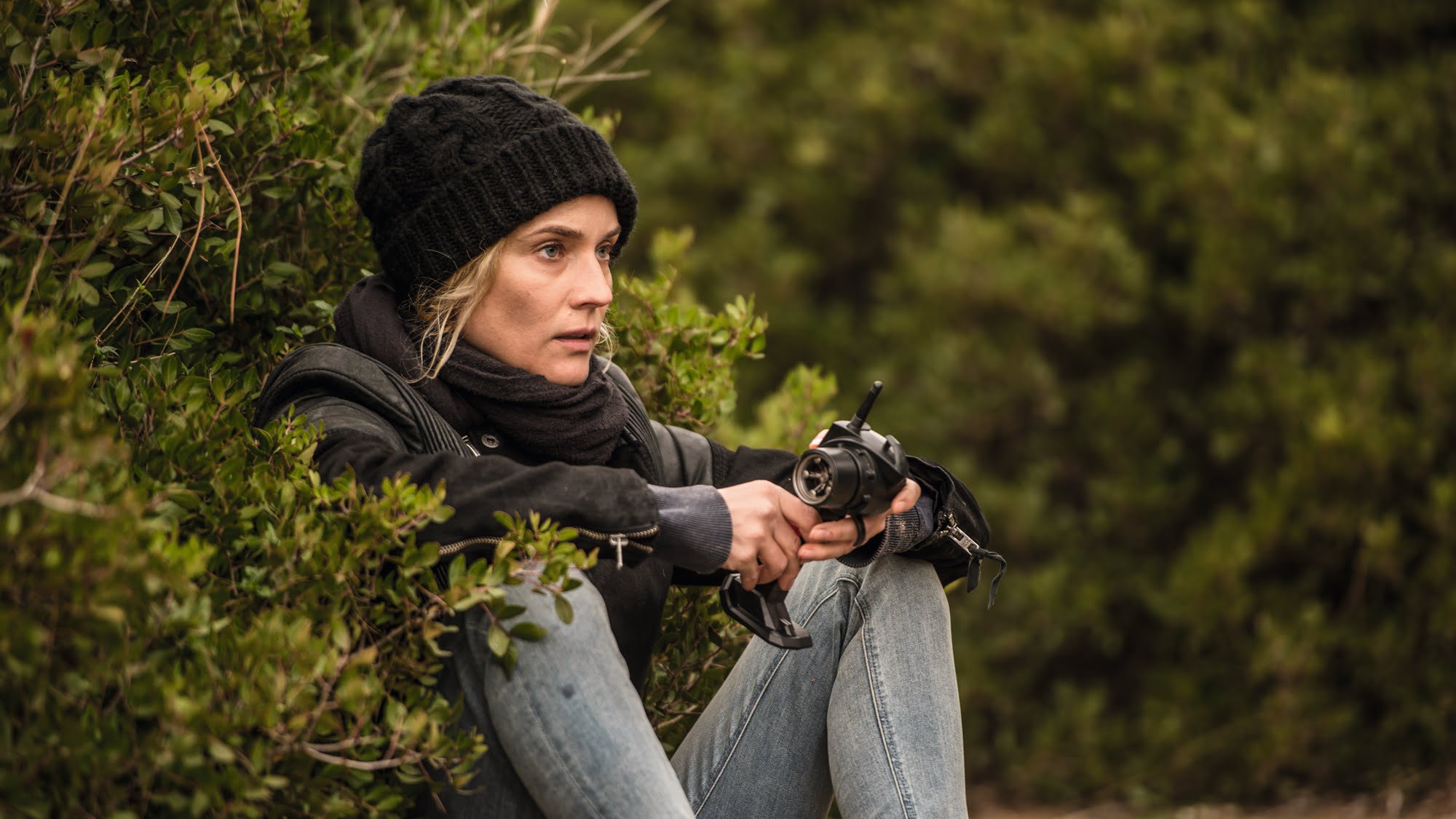 The winner of this year’s Golden Globe Award for Best Foreign Language Film and Germany’s official selection for this year’s Oscars, In the Fade deserves more credit for the direction of Fatih Akin and a commanding, empathetic performance from Diane Kruger than the film as warrants as a whole. A portrait of grief, anger, and hatred divided up into three stringently defined acts, In the Fade is two-thirds of a great film. It’s just a shame about the lengthy, clichéd middle third.

Katja Sekerci (Kruger) lives a mostly ideal big city life with her reformed drug dealer turned legitimate businessman husband (Numan Acar) and her six year old son (Rafael Santana). A white woman married to a Turkish Muslim cocks a few eyebrows with racist and suspect aplomb, but the couple shares a happy, healthy relationship. That’s all torn apart when a bomb destroys her husband’s office, killing Katja’s spouse and child. The local police investigate Katja’s long since clean husband more than they seem willing to finger whomever made the bomb, insisting that the ex-con (who served some time for hash possession around the time the couple was married) was into shady dealings once again. Eventually, after the police and Katja’s family have insisted that the dead husband was into illegal activities, it’s determined that the deaths were the result of a terrorist attack perpetrated by a husband and wife (Ulrich Brandhoff and Hanna Hilsdorf) with ties to a Greek Neo-Nazi organization. When the trial begins, Katja watches in horror as her personal character and nature of her marriage are called into question by the ruthless defense attorney (Johannes Krisch). With options for justice rapidly fading, Katja’s mind turns to thoughts of vigilantism.

Director and co-writer Akin (Head-On, The Edge of Heaven) divides In the Fade into a linear, but rigid three act structure, with each act introduced via a video of Katja’s family in happier times. The opening third – focusing on the immediate aftermath of the bombing – is far and away the most successful. Lensed in cold gunmetal blues and grays with occasional pops of neon from city lights, the opening sequences set a tone for In the Fade that won’t last, but serves this section of the story quite well. Watching Katja trying to deal with police inquires while standing her ground between the wishes of her in-laws and the skepticism of her biological mother offers plenty of great drama, and brings the character of Katja to a place of utter despair and frustration that the second act should be able to elaborate on quite nicely.

That’s not the case, as the second act of In the Fade –a standard courtroom drama bathed in sterile whites – causes Akin’s narrative to stumble. After sitting through an entire opening act where Katja finds herself broken down by the system that should be finding the killer of her husband and son, watching Krisch’s metaphorically moustache twirling lawyer and Barnhoff and Hilsdorf’s slyly ambivalent facial expressions feels manipulative and unearned. If the first act of In the Fade felt gritty, unforced, emotionally gutting, and believable, Akin’s second third comes across as a polemical whose anger gets the better of the story. While In the Fade takes its cues from heinous real life incidents of Neo-Nazi terror groups targeting minorities in Europe, the second act feels like undiluted Hollywood fence swinging. I understand that this segment is supposed to make the viewer feel more miserable about Katja’s plight, but it only serves to give the centre of the film an artificial emotional core.

That second act becomes further frustrating once the third and final movement arrives, and Katja seeks revenge on those who allowed the bombing to happen. If any aspect of the story was in danger of feeling force and clichéd, I would have thought this would have been the place. Instead, Akin moves the film and his righteous, reinforced protagonist to the bucolic Greek coastline for a conflicted and intense riff on revenge movie tropes. Instead of watching Katja carry out a single-minded mission of righteous vengeance, Akin provides time and space to show an internal conflict that the first act touched upon and that the second act jettisoned entirely in favour of maximum theatricality. 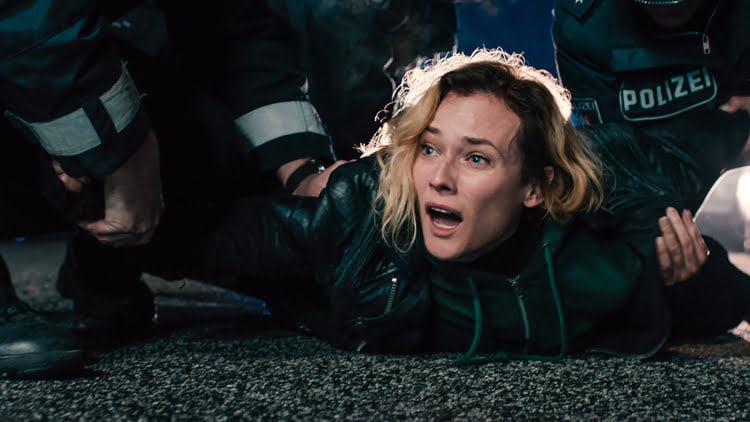 If the second act had been cut from approximately a third of the film’s running time down to about a five or ten minute summation of the trial, the faults of In the Fade would have been easier to overlook. While it’s hard to argue the film’s well meaning emotional and political viewpoint, the courtroom drama that erupts in the middle of In the Fade never jives with the rest of what Akin and Kruger are trying to say with the material. Instead of a well paced film about grief and injustice, In the Fade veers off the highway into indulgent territory before thankfully righting its course.

But even in those indulgent sequences, Akin proves to be a masterful director and storyteller. Every sequence is perfectly lit and production designed, which is a hard thing to accomplish when trying to mount a story that’s meant to feel as realistic and unpolished as possible. By that same token, Akin never allows his sense of visual style to step on the performances of any of his actors. If someone has something to say of value, the focus is squarely on the people talking and those reacting to what’s being said. It’s a perfect balance of visual and narrative storytelling that makes In the Fade consistently watchable despite sometimes going over the top.

It’s all held together by the best performance of Kruger’s career, one that garnered an award for Best Actress at Cannes last year, and a lead performance that deserves a lot more award season buzz than it has been receiving as of late. Kruger’s character is sympathetic, but strong. She’s coming apart at the seams, stumbling over past bad behaviours, and so grief stricken that it’s a wonder Katja can even think straight. Yet Kruger intelligently and deftly portrays Katja as a woman with an unshakable sense of loyalty, love, and morals. Katja might be in the midst of a nervous breakdown, but in Kruger’s skilled hands, the audience never thinks for a second that the character will waver in her beliefs and loyalties, even at the character’s rock bottom low points. Despite the film’s diversion into treacly territory, the viewer wants to follow Katja into her own personal hell, and that’s a testament to what Kruger and Akin have done best with this worthy, if occasionally misguided effort.

Check out the trailer for In the Fade: