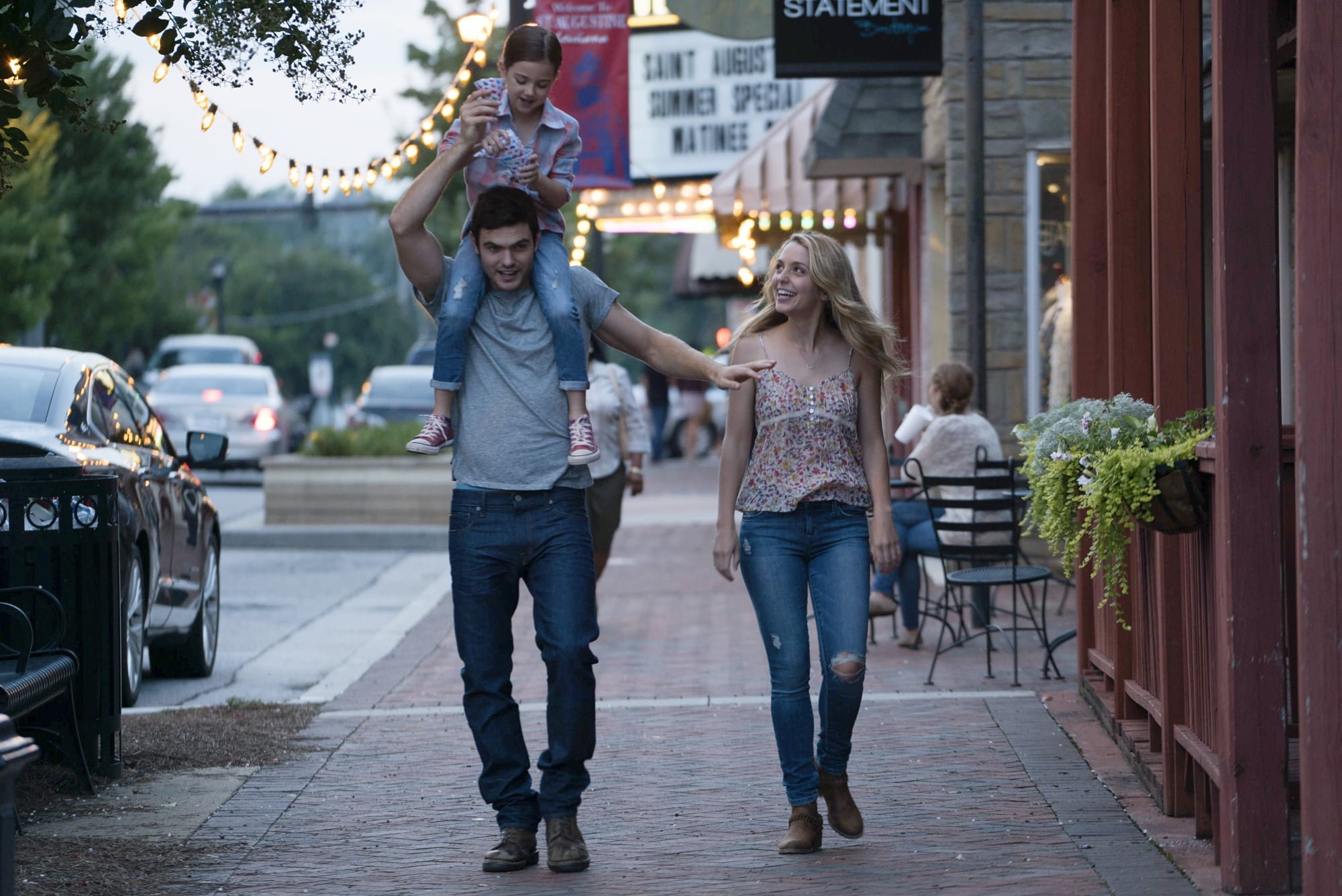 A lacklustre bit of entertainment so light weight that it already comes in evaporated form, the dreadful Forever My Girl fails as a tearjerker, a romance, and a story of an absentee father trying to reconnect with the daughter he never knew he had. When I review a film, I always consider the audience for that particular kind of film, and that not every movie is essentially made for every audience. Sometimes, I have to remind myself that some films are made with people with low standards and genre expectations. Forever My Girl isn’t a film for moviegoers with low standards. It’s a film made for people with NO standards whatsoever.

On the day of their wedding, rising country music singer-songwriter Liam Page (Alex Roe) ditches his beloved high school sweetheart, Josie (Jessica Rothe), at the altar following his first brush with success. Eight years later, Page is a megastar, but also cynical, frequently drunk, and burnt out. After a gig in New Orleans, an already tormented Liam gets wind that a childhood friend from his hometown has passed away. Ditching his tour obligations, Liam travels back to his hometown of Saint Augustine for the funeral. Or maybe it’s to get back together with Josie. Or maybe it’s to tell his estranged, but caring preacher father (John Benjamin Hickey) that he’s sorry. I can’t say with any certainty because the dead friend in question is only in one scene where they never interact with Liam, so their relationship forever remains a mystery. I guess it’s the other two reasons, but why Josie would want him back and why his father would care one way or the other are also a mystery. At any rate, Josie remains skeptical of Liam and tries to keeps her distance, not only to protect her own feelings, but because he’s unknowingly the father of her precocious seven year old daughter, Billy (Abby Ryder Fortson). Feeling pangs of guilt for the first time in years, Liam decides to stick around and attempts to become a part of his daughter’s life.

I don’t know where to begin when it comes to explaining how terrible writer-director Bethany Ashton Wolf’s Forever My Girl manages to be, not because it’s so incompetent that it’s easy to analyze and pick apart, but because it’s one of the blandest, colourless, and flavourless films I’ve ever seen. I’m used to romantic dramas and comedies treading in clichés, going for cheap sentiment, and shamelessly manipulating the audience through ridiculous twists and contrivances en route to a saccharine sweet ending. Even if those things happen in a film, they can be done well, and even if I don’t like the movie using these tropes, I can understand how some people would get some sort of emotional release from such entertainment if they’re pulled off with any degree of technical, performative, or narrative skill. I don’t know how anyone could look at Forever My Girl and think that it’s entertaining. It’s so bland that it makes a clear plastic cup filled with room temperature almond milk feel like a tequila fuelled XXX-throwdown in the red light district.

Liam and Josie are cardboard cut-outs of human beings with bland problems that should feel like a bigger deal than Wolf is capable of depicting them. For a story of a trainwreck rock star, Wolf shows no desire to look at Liam’s addiction and commitment issues with any degree of nuance, grit, or sincerity, and even less to explain how Josie has tried and failed to move on with her life after seven years. There are somewhat obvious Christian overtones, especially with regard to the relationship between Liam and his father, but Wolf can’t even be bothered to make her romance into a chaste, tenuous flirtation or a story of spiritual redemption. It’s so dull that going Christian and chaste is too spicy for Wolf.

Forever My Girl isn’t a film where people do things that make sense to normal human beings, and it also doesn’t do anything outlandish, interesting, or thoughtful. It’s a film where things just happen and the story moves along because there wouldn’t be anything to put on screen otherwise. It’s not corny, amusing, humorous, steamy, flirty, rousing, uplifting, romantic, or inspirational, so I doubt that anyone who sees Forever My Girl will get a single thing that they’re looking for from this type of motion picture. 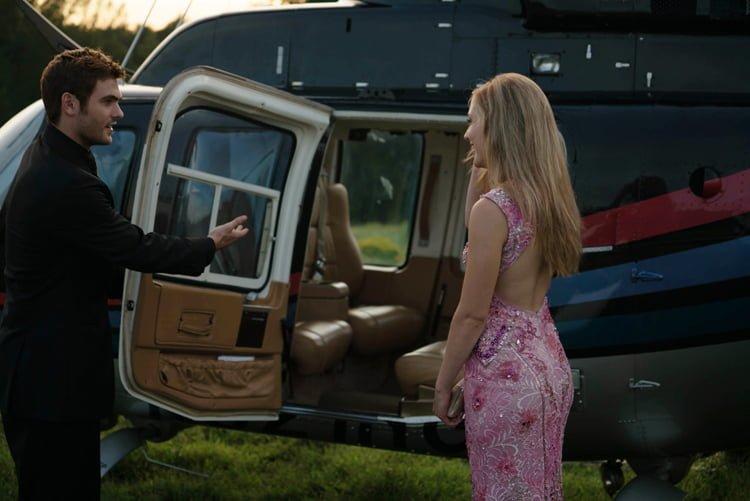 Here’s a typical, scenario from Forever My Girl that plays out several times over, almost never without deviation.

Liam: Hey, I got you this thing/did this thing for you.

Josie: I do not want the thing. I just want to know you’re here for good.

Liam: I am trying.

Liam: I will pick up our daughter from school tomorrow.

Josie: Is that cool with our daughter?

In what I guess is a novel twist, Liam often does what he says he’s going to do, even though he’s lived a life so sheltered over the past several years that he’s literally too stupid to use a credit card on his own. But that novel twist of making an unreliable man into someone semi-reliable, but flawed just makes the film duller. Liam is such an uninteresting riff on celebrity that Roe plays him with dead eyed distance, and Rothe struggles mightily to find any sort of chemistry with her star, leading to both of them coming across as monotone robots instead of people who ever had a romantic spark with one another. Neither of them are human beings. There’s a successful guy. There’s a strong willed girl. There’s a kid. That’s it. The only bits of character on display here are given to Liam: one a running gag involving an ancient cell phone that he insists on carrying around for the stupidest, most illogical reason imaginable, and the other a flashback to his mother/mentor’s death that comes at the most inappropriate and unintentionally hilarious moment in the film.

That’s probably why the crux of Forever My Girl isn’t the romance, but instead the bond between Liam and Billie. It takes no effort for Liam to come back into Josie’s life, and his dad seems only mildly angry about being ignored over the years, so there’s at least some drama to be gleaned from the father-daughter stuff, but even then just barely. Most of the interest here comes from the fact that Hickey has been given the only character with a  sense of humour. Sure, it’s the kind of sarcastic humour that no seven year old possesses to this degree, and Hickey overacts within an inch of her young life, but there’s no denying that the kid is the only person trying to give this material a pulse.

With barely enough material to fill a music video, style that ranges from pedestrian to “so ugly it’s amazing this film is even getting a theatrical release,” and a pace that doesn’t allow for depth or conflict, Forever My Girl is destined to be one of the most useless films of the year. Many critics have been comparing Forever My Girl to the glut of Nicholas Sparks adaptations that clutter multiplexes and basic cable programming rotations, and I’m here to say that the comparison is insulting to the bestselling author. At least a Sparks film has some sort of gonzo twist that serves as a reason for the story to exist in the first place. Sure, they’re obvious, often annoying, and barely watchable, but at least they show someone making an effort. Forever My Girl doesn’t have any of that. It just has people doing stuff that the audience has very little reason to care about in an effort to waste the viewer’s time and money in the least offensive way possible. I’ll take Safe Haven or A Walk to Remember any day over a film that just barely improves on the entertainment value one could get from a blank screen.

Forever My Girl opens in cinemas everywhere on Friday, January 19, 2018.

Check out they trailer for Forever My Girl: