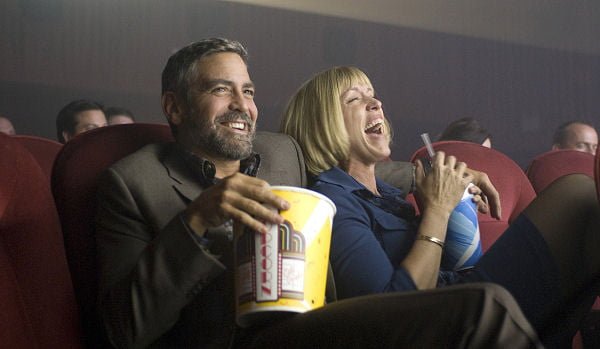 Brad Pitt and Frances McDormand in Burn After Reading

The Toronto International Film Festival is drawing to a close just as some of the biggest films from the event make their way to the theatres. First up this week is the Coen brothers‘ Burn After Reading starring Brad Pitt and John Malkovich. Also opening this week, Robert De Niro and Al Pacino star in Righteous Kill, while an all-star cast of Hollywood women star in The Women.

Burn After Reading
After the wild success of Joel and Ethan Coen’s No Country For Old Men, which debuted at last year’s Toronto film festival, it’s hard to imagine a film that could really follow that kind of success for the talented brothers. Burn After Reading is a comedy, which means it’s impossible to compare the two films, but the film still stands in the shadow of what is ultimately the Coen’s best film to date, which is bound to draw some comparisons.

Brad Pitt and Frances McDormand star in the film as gym staff who stumble onto a big secret: the tell-all memoirs of fired CIA agent Osborne, played by John Malkovich. At the same time Osborne is dealing with his cheating wife, played by Tilda Swinton, who is having an affair with a former security agent, played by George Clooney.

The problem is that, as one of the Coen’s farces, Burn After Reading is a tough sell to anyone who dove into the rich story and characters in No Country. And reviewers have been split on the film because it’s got a great cast, but not enough laughs to sustain it.

Even some of the more positive reviews seem to be tinged with a fair amount of negativity towards the film.

“The high-octane cast works hard,” Neely Tucker wrote for the Washington Post, “but there’s nothing to suggest anybody off camera tried that hard, which is fatal to a Coen outing.”

Fans of the Coen’s other farces will likely enjoy this one too, but for newcomers, this could be a hard follow-up to enjoy.

Righteous Kill
Two of Hollywood’s most memorable modern actors are back together again in a film that I can only describe as a star vehicle headed for a head-on collision with failure.

Although the two stars had a fantastic run in the film Heat, this film looks like a bit of a mess that runs purely on name power, rather than talent. De Niro and Pacino should definitely fire their agents for even suggesting that this film was a good idea, especially considering how type-cast it makes the two look once again.

Reviews are definitely not looking good from any of the major critics either. Just one example comes from Justin Chang of Variety who wrote that the film was, “at once groaningly predictable and needlessly convoluted.”

The Women
Also falling under the star vehicle/disaster heading this week is writer, director and producer Diane English’s comedy about a group of female friends in New York City.

Based on a popular play from the 1930s by George Cukor, The Women stars Meg Ryan, Annette Bening, Eva Mendes, Debra Messing, Jada Pinkett Smith, and Bette Midler. At the center of the story is Ryan’s character, Mary, who must deal with her cheating husband. As the group of high profile women try to make Mary feel better, a betrayal could end things between the circle of friends.

“The Women is such an arduous patchwork of ‘issues’ it ends up a Frankenstein’s monster of a chick flick,” Owen Gleiberman of Entertainment Weekly wrote. And reviews from other critics are not much different.

The Toronto International Film Festival
On the topic of the Toronto festival again, there have been a lot of interesting films, but definitely not as many “Oscar bait” pictures getting the kind of buzz as last year’s No Country For Old Men, or even Atonement for that matter.

Rachel Getting Married stands out as one film worth talking about leading into Oscar season, with Anne Hathaway seemingly like a good choice for a nomination.

Steven Soderbergh’s Che, parts one and two are also getting respectable buzz from the frontline, at least partly thanks to Benicio Del Toro as the iconic Ernesto ‘Che’ Guevara.

There is also a lot of buzz, although I can’t say for sure if it’s actually Oscar-worthy buzz, around Mickey Rourke’s role in The Wrestler. Rourke has been around the block more than a few times, but it seems more than likely he’s well on his way to an upswing in his career.