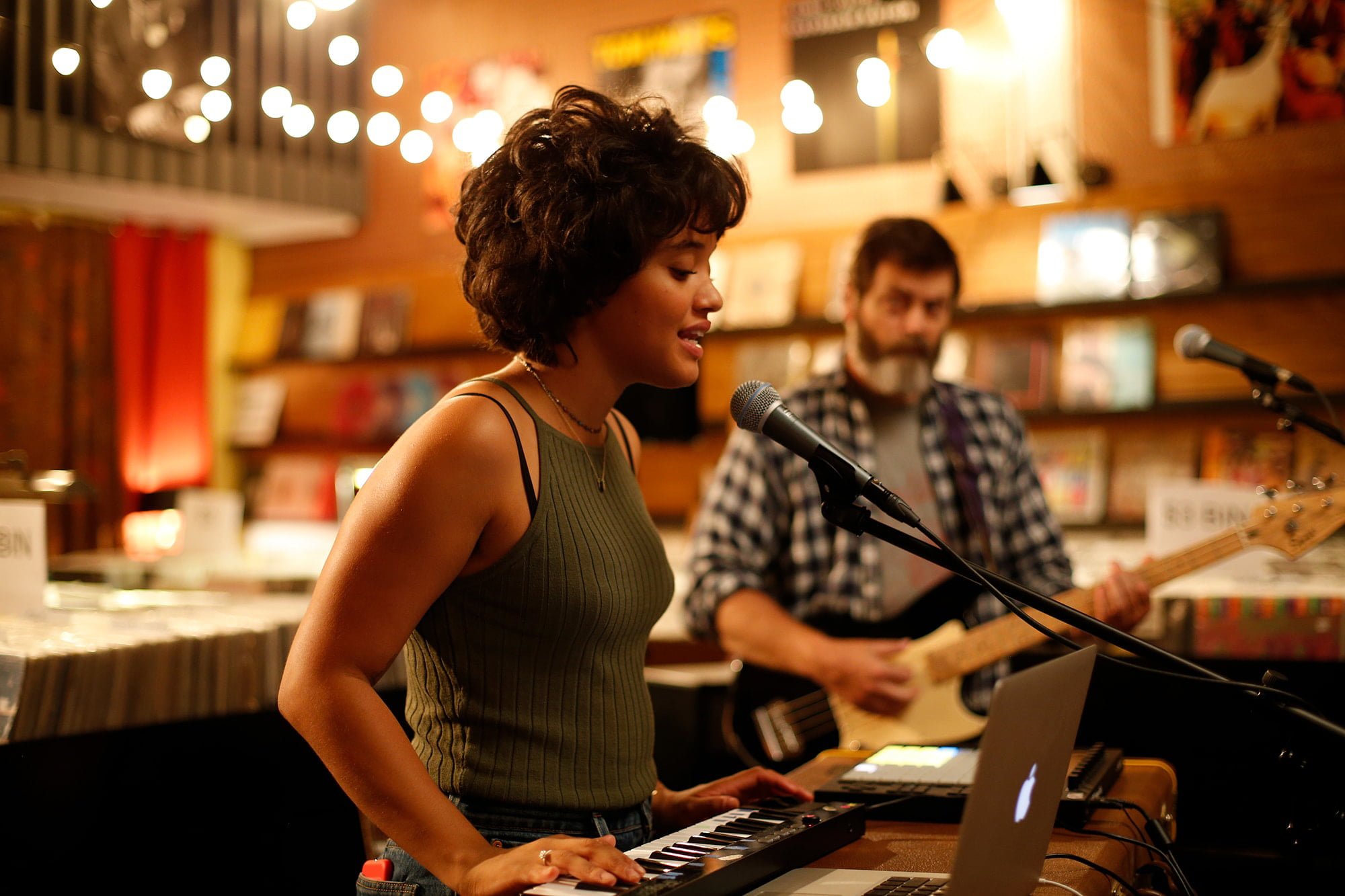 A delicately entertaining and uplifting film that manages to be inspirational and charming without becoming outright corny, overwrought, or leaning hard into American indie movie conventions, the musical-comedy-drama Hearts Beat Loud has the power to remind audiences that there’s still good in the world if they know where to look for it. The latest and best film yet from director and co-writer Brett Haley (I’ll See You In My Dreams, The Hero) places emphasis on boldly drawn characters coming to realistic epiphanies about their lives and celebrating small successes and personal triumphs. Bolstered by one of the most inspired and charismatic pairings of lead actors this year, Hearts Beat Loud isn’t the kind of filmmaking that swings for the fences, but one that has the power to touch your heart and mind with a lot more grace, goodwill, poignancy, and subtlety. It’s not a film about saving humanity from all encompassing evil, but about being a better human being, and we certainly need a lot more of the latter these days than we do the former.

Frank Fisher (Nick Offerman), a widowed, burnt out musician, has come to the difficult conclusion that he needs to close down his underperforming record shop in Brooklyn’s increasingly trendy and pricy Red Hook neighbourhood. Part of the reason for the impending closure is the need for an influx of cash to provide for his teenage daughter’s impending trip to med school in California. Sam Fisher (Kiersey Clemons) has been working tirelessly to get ahead of the academic curve leading into her fall matriculation, and gradually she has been putting aside childish things to focus on her future. One of the things that Sam has begun to move away from are nightly musical jam sessions with her father. Although she writes good lyrics, has an astounding voice, and exceptional production skills, making music for fun with her dad isn’t a priority or a method to blow off steam, but more of a distraction she feels she can’t afford. One night, dad is able to coax Sam into jamming with him, and what they come up with is a song so fully formed that Frank jumps at the chance to share it with the world. When their tune becomes a low-key indie rock sensation, Frank starts thinking that they might be able to make a go of things as a professional band, an idea that Sam dismisses outright.

A well versed cynic would probably wince at the description of Haley’s plot as it’s written above, but Hearts Beat Loud is a lot more perceptive and a lot less insufferably quirky than the synopsis suggests. It takes the heart of an easily marketable and digestible feel-good hook and refreshingly adapts it to real world scenarios, keen to keep an eye on inclusivity and equality without forsaking nuanced emotions or entertainment value. It might be easy to scoff at the casting of Offerman as the single, white, trendy father of Clemons black, gay daughter as some sort of trick designed to pull on the heartstrings, but thanks to the efforts of all involved, Hearts Beat Loud has a lived-in quality that most indie crowd pleasers fail to come by naturally.

The father-daughter dynamic is perfectly fleshed out. Sam and Frank love and respect each other, but while one is keen to move on, the other has to be dragged kicking and screaming into a new chapter of their lives. Even when Sam and Frank argue and disagree, the love they have for each other comes through, and neither says anything that they’ll truly regret just for the sake of goosing the audience. While the geographical and ideological specifics of their relationship are in flux and about to be changed, their loving bond remains constant throughout; never wavering for the sake of a cheap pop. This eye and ear for emotional consistency gives Hearts Beat Loud a strong backbone for the leads to approach Haley’s material with a lot more subtlety.

Unlike many films where a trendy location is used as a secondary character in the film, Haley wisely pushes Brooklyn to the background and places the spotlight firmly on the efforts of Clemons and Offerman, both of whom have never been better. Unburdened by the filmmaker’s need to underline her character’s blackness and queerness more than necessary, Clemons charms as a young everywoman caught between attaining her dream job as a doctor, her frustration with her father’s ideas for the future, an unwavering love for those around her (including Sasha Lane as Sam’s girlfriend), and the kernel of self-awareness that suggests she might be fully realizing the enormity of her musical talents for the first time. Clemons’ performance is built around the character finding a sense of balance and maturity that will serve her well in the future. It’s a thought process among many young adults that’s rarely depicted on screen, and far more fraught than many filmmakers realize. Haley treats the character of Sam as an adult, and Clemons delivers a star making performance by responding in kind. It’s a performance so wonderfully realized that Clemons’ accomplished vocal work during the film’s several musical set pieces isn’t even the best thing about it. 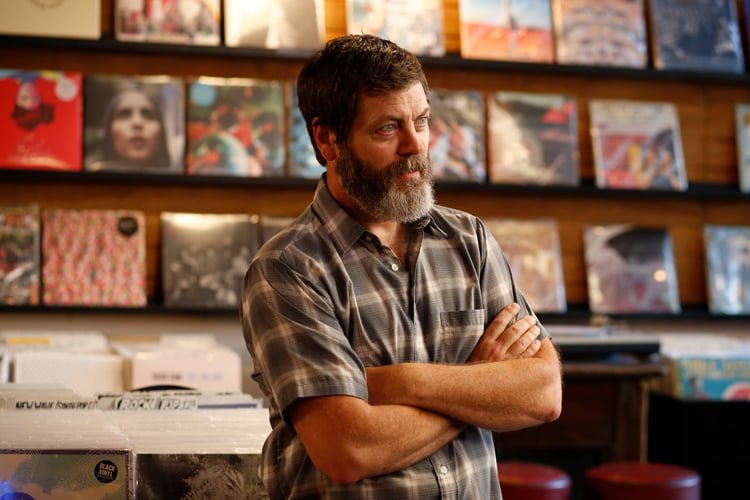 As her exceptionally cast counterpart, Offerman reminds viewers that he isn’t just a unique face with an unmistakable voice. He’s one of the most underrated actors working today. Offerman finds the silliness, sadness, and snark within his character, and also achieves a welcome amount of balance. The music and retail industries have left him somewhat cynical, but the moment something joyful happens, Frank lights up like a kid in a candy store, rushing around with a believable amount of enthusiasm and manic energy. He’s able to be himself around Sam, and he’s learning to love again thanks to the help of his landlord/love interest, Leslie (played by Toni Collette, who it’s nice to see in a genuinely sweet and loving performance again after her outstanding, impressionable work in Hereditary). But all of his endeavours are based in a longstanding pain that he’s never fully wrestled with, and Frank’s moments of sadness, anger, and confusion account for some of the film’s most heart-wrenchingly memorable sequences.

The comic and dramatic chemistry between Haley’s leads is off the charts, making the film’s musical performances a potent emotional reflection of what the characters are experiencing. There are four primary songs within Hearts Beat Loud, all provided by singer-songwriter Keegan DeWitt, and while most of them don’t appear fully formed until the film’s feel-good climax, they’re flashy and catchy enough to likely be the things most audiences will remember about the film most fondly. Clemons and Offerman deliver these numbers with conviction and gusto, and Haley never overstates the meaning of these songs to the characters creating them. A good musical needs to have good songs, and Hearts Beat Loud has four unequivocal bangers (which sadly might not be eligible for Oscars since some of the more memorable ones are based on pre-existing material).

If Haley’s film suffers from anything, it might be an abundance of colourful side characters. The romantic subplots involving Lane and Collette work well, but the same can’t be said of the inclusion of Blythe Danner as Frank’s increasingly dementia addled mother. Danner is great, but her character feels like more of a dangling thread and a distraction than a pivotal role. Similarly, while it’s nice to see Ted Danson cheekily cast as pothead bartender, he’s not adding much except for some sage advice and a few one-liners. They’re nice and provide some extra charm, but neither of them is on hand to propel Haley’s film to greater comedic or dramatic heights. There’s just a tad too much going on here.

At this very moment, the state of the world feels more than a bit depressing, and next to Morgan Neville’s recently released documentary about Mr. Rogers, there’s no better film to remind people that there can still be unforced good in the world than Hearts Beat Loud. The successes, highs, and lows experienced by Haley’s characters might seem low key, but they’re easy to believe. These are everyday people with realistic personal goals. They are people striving at every turn to be the best possible versions of themselves, even if it means stumbling along the way and atoning later. They are accepting of one another and of those around them, and quick to make amends when they realize they’re in the wrong. Hearts Beat Loud could have been wall to wall quirkiness, and it might have still succeeded on some superficial level, but what Haley and his team have delivered is far more rich and satisfying to the soul. It’s cinematic comfort food that suggests that somewhere out there someone is having a quiet, cathartic moment worth being happy about. It’s a sentimental concept, but it’s a sentiment that’s very much appreciated at the moment.

Hearts Beat Loud opens in Toronto at Varsity Cinemas on Friday, June 22, 2018. It expands to Forum Cinemas in Montreal on June 29, George Cinema in Elora and Bytowne Cinema in Ottawa on July 6, and Regent Theatre in Picton on July 20.

Check out the trailer for Hearts Beat Loud: