Review: The Land of Steady Habits

While some could read The Land of Stead Habits, the latest feature from writer-director Nicole Holofcener as a tale of one man’s mid-life crisis, it’s more a pointed, poignant, and frequently funny indictment of privilege and suburban malaise. Instead of mounting just another film where sad people of means bemoan their collective apathy towards the world around them, Holofcener’s new work looks at wealth and class from the perspective of characters who’ve grown resentful towards their own lifestyles; not because they’re bored, but because such an empty existence was in danger of making them dead to the world. The results of such an approach are vastly more satisfying than any number of similarly minded films that mistake ennui for substance thanks to Holofcener’s keen wit and performers that are willing to work hard to bring the nuances of her richly written characters to the surface.

Ben Mendelsohn stars as Anders, a former finance guru who opted for early retirement. While he tells everyone who asks about leaving his job that he grew sick of his work, an analysis of his personal life suggests that Anders suffers from a deeper form of depression. He’s (somewhat) recently divorced, and his wife (Edie Falco) has moved on to a new potential husband. In a fit of ill placed bravado and false confidence, Anders told his ex that she could have the house, but he’s been behind on mortgage payments for several months. His social life consists mostly of hitting on women in department stores and bringing them back to his sad new home. Anders’ struggles to engage with a social system he had been a part of for decades are mirrored by his adult son, Preston (Thomas Mann), a recovering alcoholic and current gambling addict who somehow finds new ways of screwing up every potential life bettering opportunity that comes his way.

Holofcener remains a master at creating characters that have huge hearts but are still capable of making terrible, selfish decisions that lead to self-sabotage. She can see the kindness in people that they can’t see in themselves. By the time the audience meets Anders and Preston, they’re barely functioning as human beings. Anders tries to cover-up his impending brush with poverty by overcompensating; decorating his lawn for the holidays with garish inflatables, willfully taking drugs with some teens at a posh party he wants no part of, and generally trying at all times to seem cooler and more put together than he actually is. Preston, whose irresponsibility is an unconscious mirroring of his father’s behaviours, gets frozen out by his parents the second he screws up, and he largely rolls over and gives up trying to fix things. Both are characters who loudly proclaim that they want nothing to do with the wealth and opulence that surrounds them, but both have curiously cut their ties to the world they seek to leave behind all too quickly. 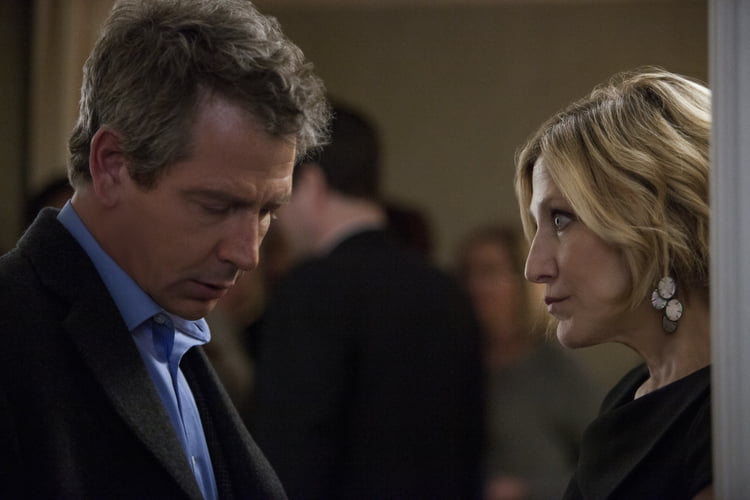 While Preston has no one to turn to in his time of crisis – drifting around town, living out of his car, and taking the potentially addiction triggering job of delivering liquor – Anders strikes up an unlikely friendship with Charlie (a wonderful and scene stealing Charlie Tahan), a budding graphic novelist and drug addled young man who’s willing to listen to Anders and his woe-is-me outlook on the world. This relationship will provide Holofcener with the film’s moral and narrative backbone, but it’s mounted in a way that doesn’t immediately become obvious. The Land of Steady Habits is a character piece through and through, with true conflicts only coming into sharper focus around the halfway point. Holofcener wants to craft detailed depictions of flawed human beings before putting them too strenuously into conflict with one another. The sequences between Anders and Charlie are not only respites where the characters feel unencumbered by external judgments, but also clues as to where Holofcener is ultimately heading with the story.

The Land of Steady Habits isn’t as snappy and briskly paced as Holofcener’s previous directorial outings, which is a purposeful and necessary choice that takes some getting used to, both for the filmmaker and for the audience. There’s a nervous energy to early scenes that never gets put to good use, and The Land of Steady Habits regresses further into the downbeat lives of its characters. It’s not that Holofcener hasn’t made a funny movie, but she’s made one that’s supposed to be finding humour in sadness. It adds up to something that could be seen as a positive or a negative depending on a viewer’s sensibilities: one is never sure if they should be laughing or crying at what they’re seeing. Should you laugh because these characters bring their misfortunes on themselves, or is it funny because it isn’t happening to you? We know these characters are capable of sometimes disarming moments of charity and warmth, but does that mean we have to completely empathize with them when they act selfishly? Like Holofcener’s previous films, The Land of Steady Habits operates in a gently amoral gray area, but even as a seasoned director and storyteller, she seems to be having some difficulties explaining her intentions here.

But whenever the tone becomes somewhat whisy-washy, Mendelsohn and Mann (the latter of whom has never been better) are there to pick up the slack, delivering performances full of subtle tics, neuroses, and expressions that enhance Holofcener’s vision brilliantly. Holofcener has always had a keen eye and ear for casting, and while the film isn’t one of her absolute best efforts, her choice of performers remains spot on. They turn some very good material from one of cinemas best and brightest wits into something even better.

The Land of Steady Habits premieres on Netflix on Friday, September 14, 2018.

Check out the trailer for The Land of Steady Habits:

Bruce Springsteen’s Letter to You | Review

Oliver Sacks: His Own Life | Review