Review: The Old Man & the Gun

If The Old Man & the Gun truly represents veteran actor Robert Redford’s cinematic swan song, then writer-director David Lowery has gifted the performer with charming send off that makes the most of his trademarked suave demeanor. Based on a New Yorker article by journalist and author David Grann, the latest from Lowery (Pete’s Dragon, A Ghost Story) might be the filmmaker’s least ambitious and breeziest project to date, but it’s hard to argue with such a genial film that’s made to showcase one of the all time greats attempting to leave at the top of his game.

Redford stars as Forrest Tucker, a septuagenarian career criminal who shows no sign of slowing down in his advanced age. Working closely with a pair of like minded and similarly aged accomplices (Danny Glover and Tom Waits), Tucker pulls off an alarming number of heists across the United States, catching the attention of the F.B.I. and a dogged Dallas police detective (Casey Affleck) in the early 1970s. Using his calm demeanour to explain to various bankers that he has a gun and he doesn’t want to use it, Tucker is able to make his marks feel at ease when they turn over all the bank’s cash. Tucker, who never stayed in a prison that could hold him, finds his current situation compounded when he meets Jewel (Sissy Spacek), a kind woman who catches his romantic eye.

While I’m sure that there are many people out who will find it more than a little morally uneasy to side with a main character who literally held hundreds of people at gunpoint and robbed them, The Old Man & the Gun represents a full on charm offensive by Redford. Flashing his expressive eyes, widening his omnipresent boyish grin, and floating through every scene of the film with an impish joie de vivre, Redford displays Tucker’s ability to coax and influence anyone around him into acquiescing. The film is built entirely around Redford’s ability to be charming, and while I’m sure all the buzz surrounding his “last performance” (which I don’t totally believe) will assuredly build throughout Oscar season, The Old Man & the Gun simply restates what viewers familiar with the actor’s work already know: that he’s a likable, roguish, and easily watchable presence. He’s not pushing himself, and most of Redford’s equally capable co-stars make sure to never step on his performance. I’d stop short of calling The Old Man & the Gun a vanity project, but even if it were, actors have been involved with far more self-serving and less entertaining causes throughout the years.

Lowery has always been an economically minded filmmaker, and his stripped down, but adoringly detailed approach to The Old Man & the Gun remains no exception. Clocking in at barely ninety minutes, Lowery’s film never attempts to get too deeply inside the head of his characters, preferring to showcase the day-to-day routines of Redford and Affleck’s characters. Lowery doesn’t even really seize upon the cat and mouse dynamic between the robber and the copper, even when Tucker starts taunting the lawman by leaving him letters and clues. It’s a fairly smart approach to a tale about a criminal staying one step ahead of Johnny Law. Watching two people play a game is never fun for an audience that never gets to participate. By framing The Old Man & the Gun as a story where an endearing antihero and his more than agreeable foil gently needle each other, Lowery finds the perfect tonal setting for his genteel comedic and dramatic beats. One of them loves the game being played, and the other is eager to learn how to best a masterful player. It’s unfussy in a nice and easygoing way. 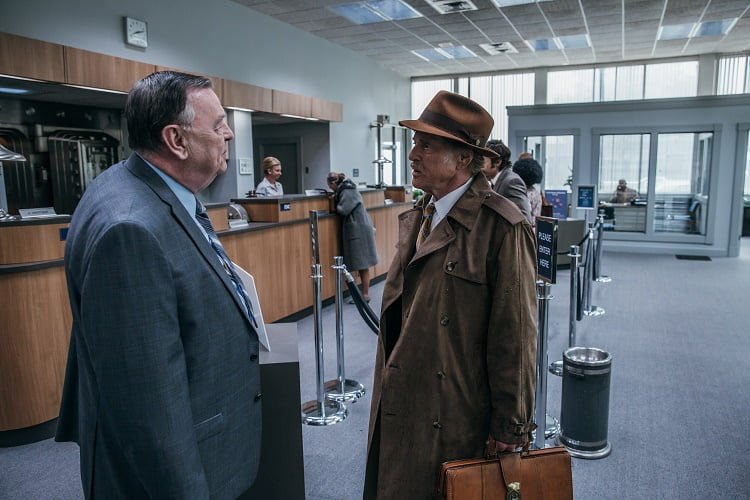 The lack of character development is a problem, though. Spacek is great and sympathetic, but almost everything involving her character feels like a constructed plot device instead of coming across like a flesh and blood person. There are plenty of moments where Lowery invites the viewer into the home life of Affleck’s family man, and outside of building more empathy for the character sent to take down the hero, it’s all a bunch of nice sentiments that never build to anything substantial. Glover and Waits have great chemistry with Redford, but we know nothing about them, something that makes them hard to care about when Forrest’s plans put them all in harm’s way later on. Lowery seems to be leaving plenty of blank space for viewers to draw their own conclusions about how everything comes together, but that level of sparse restraint shouldn’t extend to the characters themselves, especially when the entirety of The Old Man & the Gun has been built around the interactions the main character has with those immediately surrounding him.

Lowery’s visual style here is assured, awash in outstanding period appropriate detail, and sometimes slightly inconsistent. Packing the production design full of dark browns, outdated patterns, avocado and olive greens, and goldenrod shadings, the characters in The Old Man & the Gun move through settings that approximate the tacky, post-modern trappings of Middle America in the 1970s rather nicely. The costumes and accessories (particularly Forrest’s enormous “hearing aides”) lend a cozy, lived in quality. The cinematography from Joe Anderson starts off strong, with a grainy, film stock quality that immediately immerses viewers into the time period, but it quickly gives way to a slicker, more modern looking style shortly after the opening sequences. It’s a shame such an aesthetic is largely abandoned early on because it works remarkably well. The rest of the film looks just fine, but that added layer of depth remains missing.

The Old Man & the Gun, like the real story of Tucker’s life, peters out and ends in a somewhat abrupt spot, but Lowery finds a clever way of sending folks out on a high note; one that’s curiously indebted to Wes Anderson and becomes the film’s most ambitious sequence. While the real end to the story isn’t particularly cinematic or even all that shocking, Lowery finds a way to save his best material for the conclusion, probably because the film’s biggest aim is to entertain. While plenty of award season chatter will revolve around Redford’s work, The Old Man & the Gun remains a largely unpretentious bit of fluffy storytelling. It’s old school matinee fare delivered with a tipped cap and a warm smile. Sure, there’s a dark undercurrent here that Lowery is flat out refusing to engage with, but it doesn’t make the film any less entertaining in the moment.

Check out the trailer for The Old Man & the Gun: