For his first feature effort as a writer and director, actor Rupert Everett takes a deep dive into the final tragic days of witty, embattled, and disgraced playwright Oscar Wilde in the uneven, but not uninteresting biopic The Happy Prince. Focusing predominantly on a fading, unhealthy Wilde’s shortcomings rather than his successes, Everett – who also headlines the cast – crafts an almost Shakespearean tragedy out of an artist in decline. Unfortunately, without any larger context or consequence outside of the obvious ending to Wilde’s fall from grace, it’s all a bit hollow and self-indulgent. Wilde was wildly self-indulgent, so that’s somewhat forgivable, but it’s a take on his life so resolutely focused on wallowing in that one specific character trait that the film built around him never creates any lasting sparks.

Although there are some fleeting flashbacks in Everett’s time shifting narrative to happier, healthier, and wealthier times for Oscar Wilde, The Happy Prince starts in 1897, just after the Picture of Dorian Gray and Salome author has been released from prison following a conviction for sexual indecency. He’s essentially exiled to Paris, and the obviously queer and sexually insatiable Wilde continually insists that he can patch things with his estranged wife, Constance (Emily Watson). His closest friends, writer and actor Reggie Turner (Colin Firth) and former crush and estate manager Robbie Ross (Edwin Turner), do what they can to make sure that Wilde is provided for, but Oscar remains a master of self sabotage, quickly rushing back into the waiting, manipulative, and selfish arms of Alfred “Bosie” Douglas (Colin Morgan), the aristocratic brat that landed one of history’s greatest wits in prison in the first place.

It’s not hard to see why a classically trained actor like Everett would find himself so attracted to Wilde. The writer’s pithy wit and cutting social barbs have ensured that Wilde remains one of the most studied and celebrated literary figureheads today. His pompous and pretentious swagger gives an actor, writer, and director plenty of material to work with, as does Wilde’s zest for living life to the fullest (or to the edge, depending on how one interprets it). His tragic final years are the stuff of legends; a life so awful that not even a writer of Oscar’s calibre could deign to make it all up. Wilde is one of the patron saints, not only of queer culture, but also of soulful male intellectuals everywhere. Essentially, Everett is jumping at the chance to portray someone who attained iconic status. 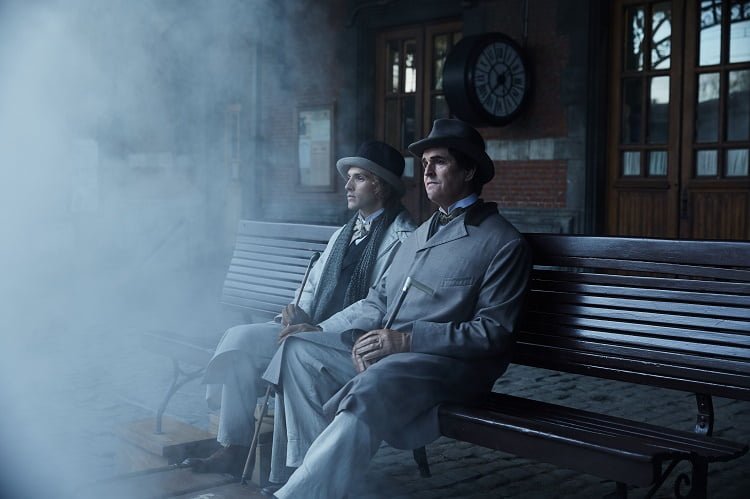 In a bit of narrative miscalculation, Everett centres The Happy Prince more around Wilde’s status as a performatively larger than life figure, and less as a writer or complex human being. Everett’s instincts are right when it comes to portraying Wilde as someone who commands a room and demands that all eyes stay on him (even when it’s better to remain silent and hidden), but there’s little insight into the details that make him tick. Everett’s relationship to Watson’s understandably frustrated ex-wife is thanklessly written, and feels tacked on to a point where it might have been better to excise Constance from the story entirely. All of Wilde’s decisions in Everett’s script come from a fear of being and dying alone, but they also exist in a vacuum without the benefit of additional context. If someone were to approach The Happy Prince knowing little about Wilde’s life, one could be forgiven for thinking it was a rather standard story about a closeted gay man continuing to pickle himself to death with drink, drugs, and sex. The Happy Prince is so focused on iconography and grand gestures that it forgets to humanize its central figurehead for much of the running time, only approaching sincerity when it’s far too late to turn back. That might be part of the point, but it’s also limp and unsatisfying.

The supporting cast is also largely forgotten in the wake of Everett’s enormous spotlight on himself, which is a shame considering that a large part of The Happy Prince’s heart comes from observing and empathizing with those who care about Oscar watching on in horror as he makes the same life ruining mistakes over and over again. Watson’s absolutely underused, but she still has a better part than Firth whose sole emotion here is stoic concern. Morgan’s eminently detestable dandy gives Everett’s audience someone villainous to sneer at, but it’s all written in a rather one-note fashion that’s difficult for the actor playing him to rise above. Benjamin Voisin pops up from time to time as a kindly, impoverished part-time Parisian gigolo that Everett relates the titular fairy tale to, but he’s mostly a blank slate and a sounding board, despite the young actor’s best efforts. The only supporting cast member who truly dazzles – and indeed steals the entire show away from Everett’s leading turn – is Thomas, whose portrayal of an endlessly devoted friend and former lover is nothing short of heartbreaking. One almost wishes the film were simply Thomas and Everett alone for two hours.

Everett has certainly written himself wonderful material to play around with in a superficial sense, but there’s little other room here for directorial flourishes. Visually, Everett finds himself pulled towards literal and metaphorical darkness. Caked in makeup designed to underline Wilde’s decay, the director and star finds nice locations and gorgeous production design elements to mirror the character’s decline. It’s a pretty easy metaphor, but it’s one that Everett can handle easily while juggling his many production hats. Outside of making sure the period details feel authentic, however, the direction is rather average, which is disappointing when the film has been built around someone as boisterous and liberated as Wilde.

The Happy Prince has plenty of showcase moments, but their sum doesn’t make for a satisfying tragedy. It’s clearly a passion project for Everett, but that drive and determination only takes the film so far. It’s a work that’s easier to admire than it is to like. Devotees of Wilde and Everett might find this a fairly entertaining take on one of literature’s smartest and snarkiest heavyweights, but most will probably be expecting more from something with this elite of a pedigree.

The Happy Prince opens in Toronto at Cineplex Canada Square on Friday, October 19, 2018. It opens in Montreal on October 26 and expands to additional Canadian cities throughout the fall.

Check out the trailer for The Happy Prince: