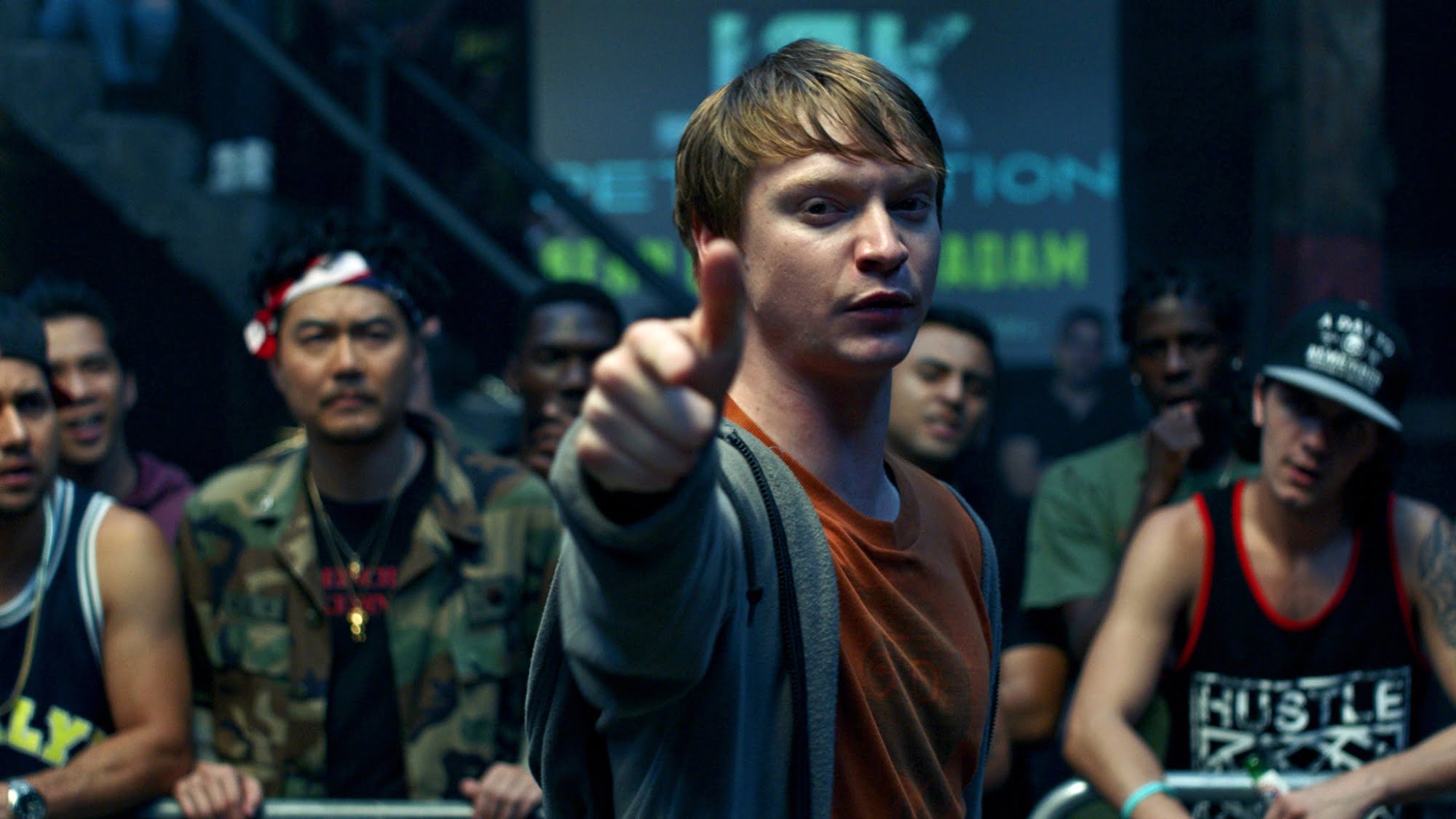 Bodied, director Joseph Kahn’s predominantly comedic deep dive into the world of battle rap and how the art form stands as a reflection of any number of societal hypocrisies is a swaggering, in-your-face, button pushing, purposefully triggering bit of bawdiness delivered from a surprisingly academic perspective. It’s a foul mouthed, offensive blast of realness mixed with degrading, childish insults, but also a curiously pointed look at a lot of the things cultural critics think about for a living. Perhaps it’s no surprise that late in Bodied a character returns to the film wearing a chain that says CRITIC in large, shiny letters (and whether that’s from the framing or the touch was intentional, I’m not really sure). Bodied is a film that openly invites its own criticism, acknowledges anything bad that you’re potentially thinking of saying about it, and then throws it back in your face with a hearty “what the fuck are you gonna do about that?” It’s shaggy, overlong, and sometimes tough to take, but ultimately if one can listen or read between the bars being spit, Bodied is smart and worthwhile viewing.

Adam Merkin (Calum Worthy) is a white Berkley humanities graduate student who wants to do his thesis paper on the use of “the n-word” in the context of battle rap. An aficionado of the form and a one time slam poet, Adam drags his hyper-woke, belittling, vegan girlfriend, Maya (Rory Uphold), to a battle rap showcase where he wants to connect with his favourite spitter, Behn Grym (Jackie Long). Behn cautiously agrees to talk to Adam once the white boy can prove he has a mostly competent and nuanced take on the intricacies of battle rap, and eventually they form a bond. On the night they meet, Behn puts the unassuming Adam into the middle of a battle against a horrifically corny rapper, and it turns out that the college boy has pretty great flow, bars, jokes, and sensibility. The experience exhilarates Adam and he begins engaging in battle rapping on a regular basis, much to the chagrin of his girlfriend, who finds it misogynist, homophobic, racist, and problematic. Adam becomes a bit of a sensation, but he quickly finds out that while there aren’t any rules about what can and can’t be said in a battle, some personal lines shouldn’t be crossed.

Kahn, director of the deliriously wild, inventive, misunderstood, and fun genre send-ups Torque and Detention, delivers his most subdued (but definitely not sedate) effort yet with Bodied. While the film stays in a constant state of flow and motion (thanks to cinematographer Matthew Wise) and Kahn throws in a few visual pop-ups here and there, Bodied is more resolutely focused on wittiness, perception, and the meanings that loaded words and phrases carry with them. Guided by a screenplay courtesy of Toronto battle rapper Alex Larsen (a.k.a. Kid Twist), Kahn knows that he doesn’t have to do very much to make the rapid fire diss-fests that comprise most of Bodied into vibrant pieces of work. People view such videos all the time on YouTube (which would ironically become involved with the Bodied’s distribution), and they’re not often watching for the production value. For perhaps the first time in Kahn’s underrated career (which includes dozens of iconic music videos and commercials that you probably know, love, and didn’t realize he helped create), the director leans heavily into the personalities and personas of his cast, which is populated by various wordsmiths who understand the artform at hand very well.

The biggest secret weapon in a battle rapper’s arsenal is their personality, and Bodied is a film with personality to spare. Their wordplay and vocabulary can be impeccable, but if they aren’t confident and willing to go to dark and uncomfortable places with their art, a battle rapper will die on stage. This is probably why Bodied is at its most compelling whenever two people are duking it out, with the film’s nearly forty minute long climax feeling one stumbled across a WWE pay-per-view. It’s relentless and not always fun to watch these people tear each other apart, but the personalities of the people delivering sometimes heinous lines about people’s sexuality, race, partners, and children are always nothing short of magnetic. While Long and Worthy are excellent and given the bulk of the acting duties, anyone else passed the literal or metaphorical microphone is either playing a version of their off-screen selves or they’re gifted with clearly defined, often subtle character traits to emerge over time the longer the viewer gets to know them. While the raps drive the action, the characters provide Kahn with the style his latest needs to succeed.

And really, what’s the point of making something like Bodied unnecessarily stylized when battle rap is supposed to be a hip, edgy, bare bones, underground sort of thing and the film built around such an art form is designed to willfully weed out anyone not wanting to engage with the material mere minutes into it? Every curse word, epithet, stereotype, and put down in the book is pretty much cycled through in record time. The words are the bullets, so no other pyrotechnical trickery is needed in Bodied’s shock and awe campaign. 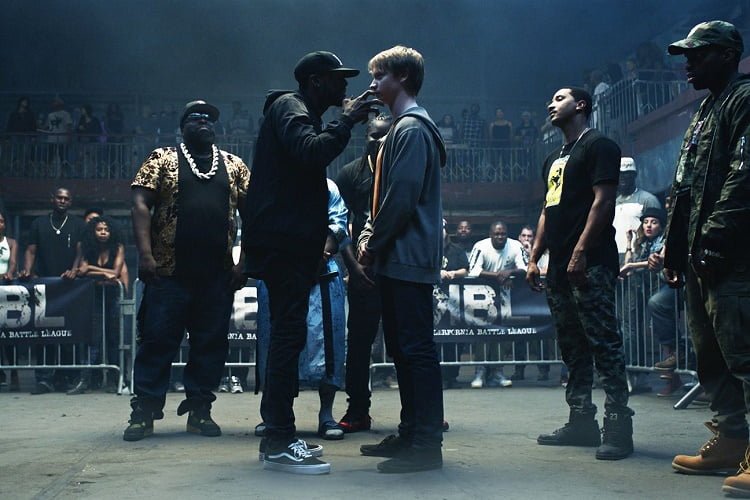 But that’s also where things get a little slippery. While Bodied wants to have a serious conversation about the use of inclusive or politically correct language, it’s also not picking any sides or shaming anyone who might take things a bit too far, especially once Adam starts testing the limits of his cultural “passes” and friendships. It knows that people in the audience will laugh at sometimes horrible words, but outside of Uphold’s annoying girlfriend (who sticks around the film far longer than necessary) and her cadre of equally unlikeable and hypocritical friends, nobody’s really there to call anyone out on their bullshit. Kahn and Larson basically throw their hands up whenever such a discussion is raised, turn these moments into jokes that are hit or miss in terms of how funny or serious they are, and ultimately everyone gives an approximation of the “that’s showbiz” defense when cornered, called out, or seen. Whenever Bodied attempts to be a serious examination of complex issues, it both frustratingly and realistically feels like watching circular arguments played out without sides taken or resolutions reached. But that’s life, I guess.

Bodied is far more successful, pointed, and timely in its depiction of liberal arts majors as the best bullshitters on the planet. Adam, who’s kind of spiritual composite of younger versions of Larson, Eminem (who serves as a producer), and Roger Ebert, thinks thoughtfully and critically about everything he’s going to say, something illustrated nicely by Kahn when the character is mentally searching for a word strong enough to put a stop to an argument with his girlfriend. There isn’t a single thing in Adam’s life that he hasn’t analyzed to death or been able to theorize about. He obviously gets it from his father (Anthony Michael Hall), a professor, poet, and celebrated literary critic that’s about as pompous as he sounds from that description. Adam enjoys talking with artists about their art, and eventually he feels confident enough to engage in the creative process himself in a medium where basically anything goes as long as it makes sense and can be rationalized into some sort of storytelling context. As Alex’s dad says about the humanities, “you can make up any bullshit you want” as long as you can back it up, and Bodied excels greatest in examining how people can carefully jump through their own tightly crafted mental hoops to justify their criticisms and behaviour. Within Bodied, characters use their talents for rhetoric and criticism for entertainment purposes, to give people perspective, to promote a form of activism, to offend, or to forward their own sense of righteous self worth. Bodied is as perfect of a metaphor for the messy ethics of cultural criticism and the messiness of modern discourse that I’ve seen in a long time. If Alex has to question how it’s possible for a battle rapper to hang onto his friends by the end of Bodied, the same quandary goes double for people who criticize for a living. It’s a question that truly defines the best battle rappers and the best critics alike. It speaks to the difference between someone with decent bars and superstar flow.

Bodied steamrolls over any number of other topics across its lengthy two hour running time, including code-switching, virtue signalling, bullying, and dozens of others that pop in and out of the movie at various points. It’s all a bit overwhelming in a way that’s entertaining, but not necessarily constructive. It also builds along pre-established genre lines, with the film’s second half headed straight into the heart of 8 Mile territory and some final battles that feel a bit too eerily similar to the climax of Eminem’s less perceptive but better produced star vehicle.

It also grows predictable down the stretch leading to moments that don’t land as well as they should on an emotional level. When some characters are taken aback by the consequences of their actions, the intelligence drips out of them somewhat, and the viewer wants to straight up ask them, “Well, what the fuck did you think was going to happen here?” Bodied builds to a climax that’s equally captivating, exhausting, and dragging at the same time, but it also invites those very criticisms. “What the fuck are you gonna do about that,” indeed.

Check out the trailer for Bodied: