The Bill Murray Stories: Life Lessons Learned from a Mythical Man takes a jocular, but unnecessary and one-sided look into the cult of personality that has been built around one of Hollywood’s most elusive  and beloved stars. Built around the concept that everyone has a friend of a friend of a friend with a story about the Ghostbusters star crashing some random social gathering (announced or unannounced) and living it up with everyday common folk, The Bill Murray Stories takes on the appearance of a documentary that people might show to friends to prove a tenuous point and gently entertain, but it’s not in any way a balanced, remarkable, or insightful piece of work.

Director Tommy Avallone (I Am Santa Claus), who had his own Murray moment, looks at an actor who’s as elusive and well photographed as a sasquatch or a yeti when it comes to his private life. For years, Murray has made headlines for popping up in the strangest of places, all in the name of having a good time. Around the world, he’s been known to show up at bars, house parties, weddings, karaoke nights, kickball games, coffee shops, construction sites where he makes friends and rubs elbows with people he doesn’t know and who had no clue he would be appearing. These stories, many of them documented for posterity in the digital age, furthers Murray’s status as a mythical figure, but also his image as an everyman.

The Bill Murray Stories: Life Lessons Learned from a Mythical Man is exactly what it says on the tin; nothing more and nothing less. Avallone travels between places like Austin, Murray’s hometown of Chicago, and Charleston, South Carolina (an apparent hotbed of activity for the actor) to talk with people who’ve basked in the performer’s glow and sometimes surprising generosity. It’s all rather monotonous. There are only so many times in the span of just over an hour one can listen to the similar stories of an actor gracing grateful people with his presence, and it’s only about half an hour before Avallone’s cutesy approach has grown monotonous (especially the director’s numerous attempts to contact Murray for comment on the infamous 1-800 number he uses to vet those trying to get in touch). At the very least, Avallone sticks to interviewing people who’ve had genuine, verifiable encounters with Murray, and he’s not trying to wade through the morass of stories that have most likely been fabricated. 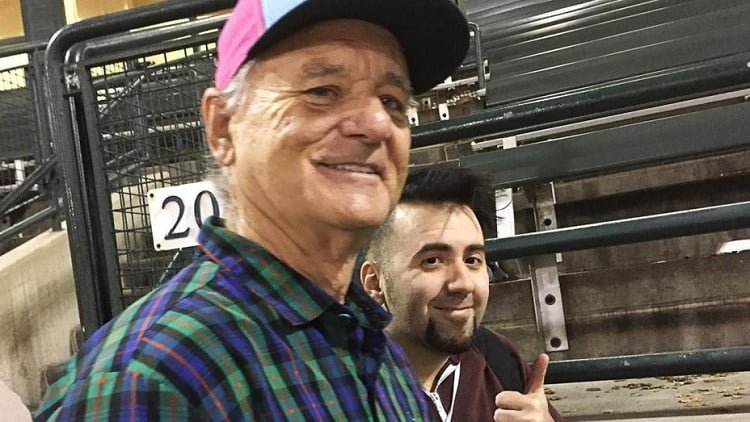 The Bill Murray Stories is a film made strictly for devotees and those dreaming of similar close encounters. Many people would love to achieve a level of celebrity status where they could simply walk into a room, and everyone would embrace them with open arms and hang on their every word or action, which makes Murray’s scattershot public appearances so endearing. Here is a man who could get away with pretty much whatever he wanted because people love his movies, he makes them laugh, and he wants to be treated like a regular person.

But does that make Murray some sort of magical unicorn or does it make him an entitled celebrity? That answer isn’t quite clear because Avallone’s film has no counterpoint whatsoever. The Bill Murray Stories are just that: stories. There isn’t much to be said about anything who had a less than stellar experience with Murray, but those stories aren’t hard to find if one knows where to look. In this depiction of the Murray myth – one that subscribes all too heavily to his status as a great example for how people should live in the moment – everything is wine and roses. Any idea that Murray might not be a perfect human being is quickly shuffled aside, and some of his actions could be seen as annoying and not altogether charming. I’m sure he’s doing a lot of these acts from a place of love and respect, but questions about such entitled behaviour still abound.

It sounds cynical to say, but no one could be as perfect and delightful as Bill Murray is made out to be in Avallone’s film. About the only thing that separates stories about Murray from tales of other people having fleeting encounters with celebrities is that time with Bill seems to last longer and have more of a personal connection. That’s nice, but not everyone should aspire to meet Bill Murray, or worse yet, to BE Bill Murray. The Bill Murray Stories makes the case that we should strive to be more like the actor both on screen and off, and the results are genial, but unconvincing at best and troubling at worst.

Check out the trailer for The Bill Murray Stories: Life Lessons from a Mythical Man:

It doesn’t sound cynical, it is cynical.
I found the point of the movie not to be in the deification of Bill, but in how we could all aspire to aim to bring what we have to offer other people.
I respect that our opinions may differ, and we like what we like (or don’t).
But I find it sad to boil this movie down to an oversimplification of trying to emulate a public persona, but to consider being a little, or a lot, more that way.
Best wishes despite our disagreement. Sincerely.

What a great film.Not sure what the 3 stars is all about.The film shows how treating people good and just enjoying the moment is an admirable goal.In the reality TV, ME culture, its nice to see Bill just being a normal guy at an outing. Not making a big deal of himself and just relating to everyday people is refreshing.We can use a lot more Bill Murray’s doing good deeds in this world and not looking for any publicity for doing it.